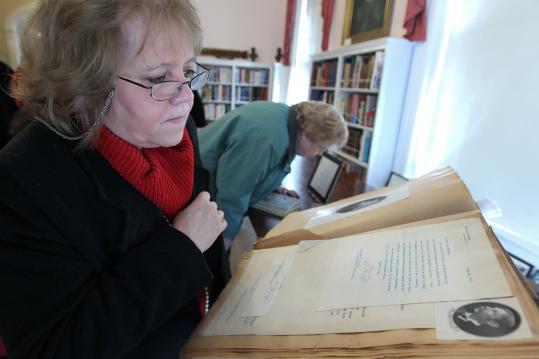 ABINGTON - Fifty residents from three towns that composed Abington before their late 19th-century split eagerly awaited the opening of a 100-year-old time capsule Sunday afternoon, but when the sealing wax was broken, the red twine snipped, and the brown wrapper removed, the contents were a little disappointing.

The capsule contained five programs from the weeklong 1912 celebration of “Old Abington’s’’ 200th anniversary and a handful of sepia images of buildings and local landscapes from 100 years ago, most of those familiar from copies already in possession of local historians.

The time capsule’s opening was the kickoff event for this year’s tricentennial celebration of Old Abington, which once included Rockland and Whitman until the 1870s split. Many who turned out Sunday had grandparents who probably enjoyed the weeklong bicentennial bash in 1912.

“Between 1912 and the separation of the three towns, there was just 37 years, so everybody born before that split had a strong sense of nostalgia,’’ said Doug Ulwick, president of the Historical Society of Old Abington, who made a presentation Sunday titled “Abington at 200, the Old Town’s Last Hurrah.’’

Ulwick said the old town had essentially functioned as three individual communities long before its formal split, each with its own churches and schools. “Different sections of town developed their own identities,’’ he said. “In 1874, Rockland said, ‘We’re out of here,’ and a few years later, Whitman followed.’’

But in 1912, all three communities once again united with considerable enthusiasm to plan the 200th anniversary of the original Abington.

“They had 20 committees to plan the event,’’ Ulwick said. “They even had a Committee of Badges and a Bell-Ringing Committee. The scrapbook shows interest in this went beyond the town and the state. There’s even a New York Times article about it.’’

The 200th celebration ran for a full week in June. Classes were suspended in all three towns, and public transportation was free of charge.

“We are told 25,000 attended the events,’’ Ulwick said. President William Howard Taft was invited but declined, saying he could not leave Washington while Congress was in session, according to his letter, preserved in a scrapbook.

One of the bicentennial’s highlights was a 5-mile parade through the three towns. Buildings were festooned with bunting, and each town constructed an arch through which the parade passed. Rockland’s arch on Union Street contained more than 1,000 electric lights. The celebration featured a gala at Whitman’s Town Hall, a mere six years old at the time, where party-goers celebrated until 2 a.m. The final day included a 10-mile marathon race through the three communities and an evening of fireworks.

An arch crowned with a bronze eagle, built in Island Grove Park in honor of Civil War soldiers during the bicentennial year, still stands. The Tricentennial Committee may refurbish the arch as part of this year’s efforts.

The upcoming celebratory gala will take place March 3 at Massasoit Community College in Brockton, instead of in one of the towns, because today’s attendees will arrive by car rather than trolley or train and will need parking. But road races, art shows, a firemen’s muster, and band concert are on the events list in the three towns, along with “the biggest fireworks display ever seen,’’ probably to be held in Abington, Ulwick said.

Before the capsule was opened Sunday, Rockland resident Sylvia Duchaine wondered whether it would include a picture of the first baby born in the bicentennial year or a book by a local author. Maybe some memento of the town’s industrial past as a shoe manufacturer, she mused: Most Union soldiers marched to battle wearing shoes made in Abington.

After the package was opened and its contents examined, Donald Cann, a Rockland history buff, didn’t hide his disappointment.

“I would hope the next time capsule is a little more exciting for people opening it 100 years from now,’’ he said. “In 1912, there could have been something about the Titanic.’’ The luxury ship sank in April of that year.

The 100-year-old package had been kept for the last 80 years in Abington’s Dyer Memorial Library, built in 1932 as a repository for local history. Nobody knows where the time capsule was kept before that, or whether it was assembled by an individual or group.

Not everyone was disappointed.

Pam Whiting, the Dyer Library’s research librarian, said she was happy the town now had five new copies of the 1912 celebration program book. “I use it here all the time,’’ she said. “It’s an important piece of history.’’

Rockland resident Rudy Childs enjoyed being present for the opening, no matter the outcome. “It’s a marvelous thing to be able to be here and witness such an event,’’ Childs said.

Ulwick had a few ideas should a time capsule be prepared for a 2112 opening.

“We have some memorabilia like T-shirts, Tricentennial Christmas ornaments, and paperweights, but what might be more important would be impressions of people of their place in history, their view of the world. It could also include their hopes and dreams for the future.’’