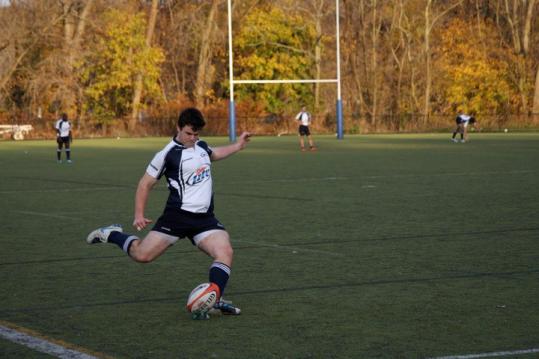 Chris Laughlin was a late addition to the USA Rugby High School All-American winter camp that was held in Tempe, Ariz., last week. The St. John’s Prep senior received his invitation in late November, nearly two months after the majority of the other players.

The invite, though, came just days after his 11-point, attention-getting performance for his club team, Mystic River, in a 21-7 win over the Boston Irish Wolfhounds for the Division 1 Northeast championship. At 17, the Danvers resident is the youngest player on his club team - which also includes a player in his early 40s.

“To play Division 1 rugby [at Laughlin’s age], it’s pretty unusual,” Green said. “There’s not many high school kids that are doing that, and certainly not for a team as high-caliber as ours and not in as important a role as Chris has played.”

Laughlin took no slight at the timing of the invitation.

“It was a huge honor being invited,’’ he said, “because they’re very selective as to who they invite. It was a camp of [about] 70 from across the country.’’

The camp, which consisted of drills, seminars, and games, is one of several selection steps that will provide the players for the High School All American team that will tour internationally this summer.

The staff, according to head coach Salty Thompson, was seeking players who would be committed to the program, and capable of performing at an elite level.

“We are looking for the fundamental skills at each position, but also certain physical components like size and speed,’’ Thompson told rugbymag.com.

“We will [also] try to identify the pillars of character that separate successful athletes from unsuccessful ones, such as discipline, trust, and responsibility.’’

At 6 feet, 220 pounds, Laughlin was a latecomer to the sport.

He had played soccer in his youth, but as a freshman at St. John’s Prep, he was looking for a change.

“I was kind of drawn to rugby in the spring [of my freshman year] after kind of taking the fall off,’’ he said. “I just decided that I wanted to be involved in a team sport again.

“I like how it has the contact of football but it has the flow of a game like soccer. There aren’t any starts and stops, which I like. It’s very challenging, too, which I enjoy.’’

It can also be a challenge to explain the sport to the uninitiated. Among the most common questions he hears: What is it?

“I pretty much explain to them that a lot of people call it organized chaos, and that’s exactly what it is,’’ said Laughlin. “There’s no blocking like there is in football. So if you see your friend about to get laid out or tackled in a hard hit, there’s nothing you can do about it, sadly, which is a lot different. The best way to describe rugby is to compare it to games that people understand like soccer and football.’’

Though rugby is not officially recognized by the Masssachusetts Interscholastic Athletic Association, the game is thriving as a varsity sport at Prep, with close to 120 boys participating at various levels, according to athletic director Jim O’Leary.

Under Green, the Eagles play in the Massachusetts Youth Rugby Organization and square off against Catholic Conference foes Boston College High, Catholic Memorial, Malden Catholic, and Xaverian, as well as Acton-Boxborough and Bishop Hendricken. A perennial contender for the New England title, St. John’s has not lost in five seasons.

“Chris brings a solid balance of skill, athleticism, and attitude,” Green said. “Sometimes you get athletes really loaded with skill but are lacking in other areas. He’s got a really good balance of all three, as well as being a difference maker. To me, those people are key on any team because they’re somebody other members of the team see doing something to make a difference and are rallying behind him and he becomes the de facto leader.”

Laughlin has heard the jokes directed at his sport. The position he plays can be the target of many barbs.

“My position is actually called hooker,’’ he said. “And a lot of people find that’s the funniest thing. They all think they’re the first to make the joke.’’

Laughlin hopes he has earned a slot on the national team (he will likely learn his fate next month). He’d like to play as a collegian, and beyond.

“I’d love to see the sport get much more popular in the United States,’’ he said.

“That’s definitely one of my goals. And I enjoy teaching it to younger kids with the North Shore Rugby Football Club. I volunteer doing that.

“It’s a lot of fun just to see the kids learning, because I wish I had that opportunity when I was younger. And I think with the Olympics [in 2016 in Rio de Janeiro], it’s going to gain a lot more popularity in the United States.’’