Raynham town clerk says the time to retire has come 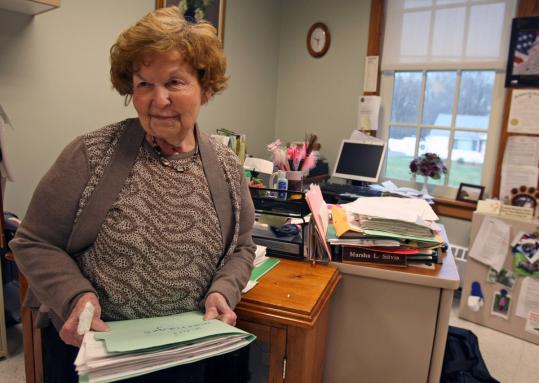 “I knew everybody that came in, and I could even tell you where they lived,’’ said Helen Lounsbury, town clerk since 1974. “Now it’s hard to even keep track of all the streets in town.’’ (George Rizer for the Boston Globe)
By Christine Legere Globe Correspondent / December 29, 2011
Text size – +

Helen Lounsbury won her first bid for town clerk in 1974, even though she was not listed on the election ballot.

The Raynham native was in her eighth year as assistant town clerk at the time, working under Arnold Ziegler, who had placed his name on the April ballot to retain his elected position as town clerk.

A month before election day, Ziegler died, and Lounsbury decided at the last minute to make a run for the position.

“Arnold’s name was still on the ballot, while I ran on stickers,’’ Lounsbury recalled. “He actually got more votes than I did.’’ She wasn’t surprised, based on the popularity of her predecessor.

Though Lounsbury got the job more or less by default, she quickly proved she was up to its challenges. She has run unopposed ever since.

Now 83 years old, Lounsbury has announced she will retire at the end of this month.

Former selectman Donald Francis, who was sworn into office several times by Lounsbury, said he will miss her presence in Town Hall.

“She is a very intelligent lady, and Raynham has been very fortunate to have her,’’ Francis said.

Raynham, like most communities in the region, has undergone tremendous growth. When Lounsbury first took office nearly 40 years ago, the town’s population was just over 6,000.

Today, the population of Raynham has swelled to over 13,000 residents. “Now it’s hard to even keep track of all the streets in town,’’ Lounsbury said.

Not everything was simpler in Lounsbury’s early days, however. Technology had yet to take over some of the more tedious tasks of her office, like counting ballots.

“We didn’t have voting machines, and we had to do all the counts by hand,’’ she said. “I remember being there all night. People came in for work in the morning and I was still there with the ballots.’’ She said the biggest victory of her career was securing automated ballot machines when they became available.

Donald McKinnon, who has been a selectman since 1973, said Lounsbury and her late husband, Al, were both well known in the community for their many volunteer efforts.

“The town report was dedicated to the two of them in 1995,’’ said McKinnon, who described Lounsbury as capable and dedicated. “I can remember one time she put me in my place when I got too close to the polls during a sticker campaign,’’ he said.

While town clerks aren’t required to be justices of the peace, many in Massachusetts, including Lounsbury, are licensed to perform civil ceremonies. Lounsbury has performed over 1,000 marriages during her tenure, and many took place in her Raynham home.

“Most people would be dressed up, and if they wanted to, they could come down the hall stairs,’’ Lounsbury said. “Some got married out by our swimming pool. They would often want me to be in their pictures, but I hated getting my picture taken.’’

Weddings did not always go smoothly, Lounsbury recalled. “I went to one couple’s house the day of the wedding and they were fighting,’’ she said. The groom wanted a quiet wedding and was angry to find the bride’s yard quickly filling with guests.

“They sent me home,’’ Lounsbury said. “A few days later, they came back, just the two of them, and got married at my house.’’

Her most memorable wedding took place a few thousand feet above the earth. “I married them in an airplane,’’ she recalled. “I was a little leery, but it went well.’’

Lounsbury said she will be leaving the clerk’s position in capable hands. Daughter Marsha Silvia, who has been Lounsbury’s assistant clerk for more than 25 years, has already been appointed acting town clerk by the selectmen. She will continue in the office until the April election. She plans to be on the ballot for the position.

Lounsbury has mixed feelings about retiring, but added, “You just know when it’s been long enough.’’

Her run as town clerk was long but pleasantly spent, she said. “Otherwise I wouldn’t have done it all this time.’’