As the debate over the Foxborough casino proposal becomes a hot-button issue, both sides turn to social media like Facebook and Twitter to rally their forces 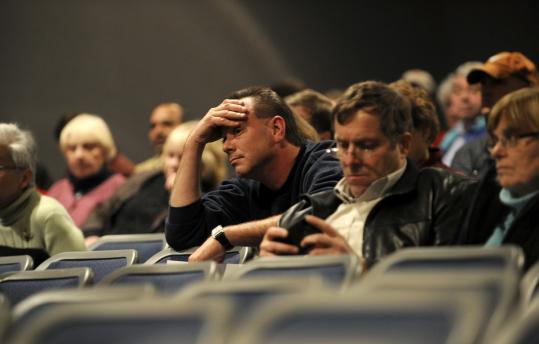 When the Foxborough Planning Board discussed a casino-related zoning change recently, a large number of residents, including Selectwoman Lynda Walsh (at right), showed up. (Photos by Gretchen Ertl for The Boston Globe)
By Michele Morgan Bolton Globe Correspondent / December 29, 2011
Text size – +

Until this month, Stephanie Crimmins of Foxborough did not see herself as an activist.

Then one day, she woke to the news that casino mogul Steve Wynn and Patriots owner Robert Kraft had teamed up to bring a $1 billion casino resort to the town where her family has made its home for four generations.

“I was blown away,’’ said Crimmins, whose mother was Foxborough’s town clerk for 22 years. “People said, ‘Don’t worry, the town will do something about it.’ Then I realized we are the town.’’

Crimmins, along with her sister Liz Karvonen, friend Erin Earnst, and a few others cleared their calendars and went on the offensive, mounting an attack to the proposed project that they say will harm Foxborough.

What emerged from a brainstorming session around a kitchen table on Dec. 2 was No Foxboro Casino, a social media campaign that produced a No Fox-Vegas Facebook page with hundreds of fans; an online petition at www.nofoxborocasino.com with scores of signatures; and an organized protest with professionally printed signs on the Town Common the next day and in the days to come.

Drawn by text messages, e-mails, tweets, a media blitz, and word of mouth, Foxborough and Walpole residents soon converged by the carload at a pair of local meetings for what they describe as a herculean effort to turn back a proposal that promises thousands of jobs, millions for town coffers, and even free child care for casino workers.

The opponents argue that a casino would invite crime, traffic, and other elements that would ruin the town’s character and end up costing money by loading demands on infrastructure, schools, emergency services, and housing.

“It has been amazing how many people have come up to us to say, ‘Thank God you are doing this,’ ’’ said Crimmins, who served on the 1994 and 2004 study committees that explored gambling proposals at the time. After the latter effort, a majority of residents rejected the notion of gambling in Foxborough at Town Meeting in 2004, and at the polls in 2005.

From a distance, the Foxborough opposition may appear to be no match for the well-funded public relations machinery of Wynn and Kraft, which only now is shifting into high gear. But No Foxboro Casino has benefited from the talents of residents such as Crimmins, a Harvard Business School graduate and executive with Panera Bread. Her allies include attorneys, high-level marketers, and information technology professionals.

“We are all trying to hold down full-time jobs while we do this,’’ said Crimmins. “We have believed we could encourage selectmen not to go forward with this proposal.’’

Collin Earnst, a spokesman for the group and husband of Erin Earnst, said the social media campaign has motivated people and given voice to those who share a common opinion.

Opponents feel strongly they need to defend their home turf, he said. “That’s why they are passionate.’’

“We want to be sure we keep people informed,’’ said Earnst, an eight-year Foxborough resident who is a principal at the Hazelton Group, a marketing and communications firm. “We settled into roles where we had strength and a sense of comfort.’’

A recent meeting at a member’s home, he said, felt more like a staff meeting than a gathering of neighbors.

In contrast, it took much longer for casino supporters to make themselves known. Some proponents say support for a casino is not as visible because residents are afraid of being targeted, as the controversy has pitted neighbor against neighbor and rocked Town Hall.

That’s not so unusual, said Tammy Vigil, a professor and associate dean at Boston University’s College of Communication. On one side is a groundswell of residents and everyday people who must feel the things they value are being threatened.

On the other side are two billionaires with every resource imaginable to further their cause and get word out on the benefits of their project, she said.

“Social media is really effective because it levels the field between David and Goliath,’’ Vigil said. “Both have access to it, it just comes down to who’s motivated most.’’

Supporters of the casino plan also know they have the big money behind them, she said. Scott Farmelant, a principal at Mills & Co., was recently hired to represent the group Jobs for Foxboro, which supports the Kraft-Wynn proposal.

Farmelant noted last week it has been just over three weeks since the casino idea was proposed, and a little more than a month since the passage of the state’s casino legislation. A response is coming in real time, he said, not media time.

Farmelant, who was also hired in 1999 to sell residents on zoning to allow Gillette Stadium and the town’s Route 1 economic development district, said supporters will come out strong after the first of the year and present a petition that favors the proposal.

Crimmins and other opponents didn’t turn to a PR firm, because they have resident Holly Steel. Steel, a corporate executive who is between jobs, said she decided to volunteer with the group because she is trained to listen to ideas and keep people on message.

In total, No Foxboro Casino’s leaders can be counted on two hands, including spouses, she said, but the ground they have covered has been amazing. All have pledged to be respectful in the public debate as they spend their own money or seek donations for signs and other expenses.

“The last thing you want to do is split people apart, so if you believe something passionately, then you find a way to share that voice and do it in a united way,’’ she said. “And we have to depend on the fairness of the media to continue to report both sides.’’