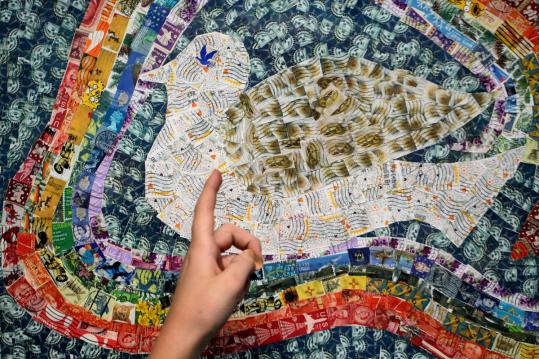 Mail delivery has been on overload at the Foxborough Regional Charter School this month, but not for the customary holiday reasons.

With items pouring in from around the world, the students are interested mostly in the postage stamps. Not just stamps stuck on the outside of envelopes destined for the school office, but ones that are trimmed and organized in boxes and bags, sometimes thousands at a time, as word spreads about the school’s goal.

The Holocaust Stamp Project is now in its third year at the school, where students are trying to collect 11 million stamps, one to represent each victim of the one of the darkest chapters in world history.

By the middle of this month, the number had climbed to 304,362. Now, with the holiday season at its climax and the flurry of greeting cards that entails, officials at the Foxborough school are hoping that the public will save stamps and contribute them to the commemoration effort.

The number represents 6 million Jews, including 1.5 million children, and 5 million others in 21 European countries who were annihilated by Hitler’s ruthless regime in Nazi Germany, she said.

The charter school’s curriculum blends world history with lessons on contemporary discrimination and bullying, a thread that ties the past with the present, said Sheer and others at the school.

Students also read relevant fiction and watch “Paper Clips,’’ a documentary about middle school students in Tennessee who collected 6 million paper clips to symbolize the 6 million Jews who perished during the Holocaust.

The Foxborough students will use some of the stamps they collect to create 18 mosaics. The first, called “With Liberty and Peace for All,’’ already hangs in a school hallway. The mosaics will symbolize the Holocaust’s Jewish victims, 18 being the numerical translation of chai, the Hebrew word for life.

Sheer said the decisions on what to do with the other stamps will be made collaboratively. “I will be looking for people who share our vision for the project, not necessarily just from the . . . school community, to work on the decisions and plans,’’ she said.

Each stamp collected symbolizes one life “thrown away’’ as having no value, Sheer said, much like an envelope bearing a canceled postage stamp is tossed in the trash.

“Eleven million is a number you see in a textbook,’’ added Ron Griffin, the school’s director of teaching and learning. “But it has taken on new meaning here.’’

James Dimino and Evan Landry, both 10, have been helping to collect stamps, and worked on the collage with several dozen others in grades 5 through 8. The work - which took 24 hours and 1,058 stamps to complete - has opened their eyes, they said.

“We are letting people know about how bad Hitler was and why we should not let this happen again,’’ Dimino said, pointing out his favorite stamps in the piece.

“I really liked cutting the stamps and counting them,’’ Landry said.

Other students said they had read about the Holocaust, its victims, and survivors, but it took on new significance once the stamps began to arrive.

“I thought if I started counting stamps I could make a change in the world,’’ said Radjaminah St. Cyr.

Yet for some students, the horror was new. “Truthfully, I just didn’t know. Now I’m really glad we did this,’’ said Jack Froio.

The K-12 charter school has a population of 1,200 students, from 25 communities and a range of backgrounds. Only a small percentage are Jewish. All have been changed by the project, officials said.

So far, stamps collected come from a variety of origins. About 10,000 of them hailed from the Mystic Stamp Co. in Camden, New York; 708 came from the American Legion Ladies Auxiliary of New Jersey; US Senator Scott Brown of Wrentham donated 100 stamps; thousands came from Sturdy Memorial Hospital in Attleboro; and a whopping 79 pounds of stamps arrived by mail last month thanks to a networking effort by one of the school’s sixth-grade students.

Ainsleigh Heaton placed a notice in a Paynesville, Minn., church bulletin asking for stamps last summer while visiting her grandmother. In return, a couple in the church who had been in the business of buying, selling, and collecting stamps donated their entire stock to the Holocaust Stamps Project.

“I feel like it’s Christmas morning,’’ Heaton said during a recent visit to the classroom.

With a ceremonial snip of the scissors, Sheer cut the tape on the first box, and handfuls of stamps were dropped on each student’s desk. The challenge, Sheer said, was to see how many could be counted in 20 minutes. Each child had a sizable stack.

In the end, students barely made a dent in the first box and counted 24,977 stamps in 20 minutes. That number was stunning to many of the children. The class collected about that same amount in all of 2009, the project’s first year.

It’s symbolic of how the work has grown, and also how far there is to go, said Heaton, adding: “We haven’t even touched a million yet.’’

As part of the outreach, student Tyler Thoener sent letters to all 50 governors as a way to honor the memories of those who died at the hands of “the world’s biggest bully.’’

Among those who responded were leaders in Arkansas, Colorado, Georgia, Illinois, Kansas, Montana, New Hampshire, New Mexico, Oregon, and Texas.

Since the project has grown so much this year, Sheer said she plans to solicit help from other members of the school community, including parents, to share some of the critical tasks associated with the project and help move it forward from year to year until the goal is reached.

Sheer said she is inspired by the children and their capacity for caring about others. And she hopes the donations continue to roll in to assist them with their work.

The mission, she said, “is to raise awareness about how anyone, no matter how young or old, can work against prejudice and discrimination by individual actions that show respect for other people.’’