Family offers to give despite its own straits 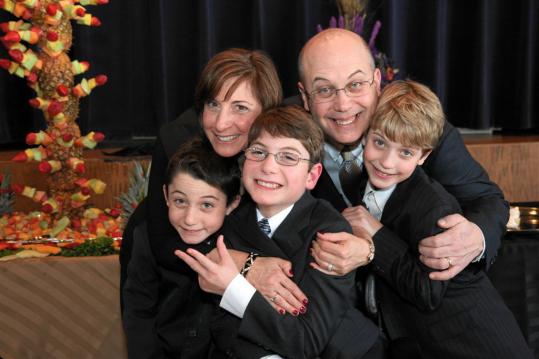 They are not poor. Hilory Paster is a math specialist who teaches in the Brookline school system. Glenn Paster is in charge of e-commerce and marketing for Metro Credit Union. They both work hard and they both work long. But as hard as they work and as long as they’ve tried, they’re just not making it.

When their first child, Sam, was born 15 years ago at 25 weeks gestational age, they knew there would be challenges. Sam spent 72 days in the hospital. And then he came home and the real fight for his life began.

Sam has cerebral palsy. “He’s verbal. He’s funny. He’s articulate,’’ his mother says. He is also very handsome. But in a world full of 15-year-olds who can leap off a couch to answer a door, grab a Coke from the fridge whenever they’re thirsty, shake hands and take the steps two at a time, getting around in a wheelchair and being dependent on someone else for everything is difficult.

The Pasters aren’t complaining, though, and neither is Sam. In fact, Glenn Paster says “we’re lucky,’’ a lot. We’re lucky that Sam is able to talk and think. We’re lucky he goes to the Cotting School in Lexington, where he plays wheelchair soccer and softball. We’re lucky he gets to participate in adaptive skiing at Loon Mountain. (“Now those people are heroes!’’)

Last month, when I wrote about a 2 1/2-year-old Lowell boy who needed a motorized wheelchair, Paster, who lives in Swampscott, e-mailed to offer the use of Sam’s chair.

“I know firsthand the MassHealth/private health insurance challenges. But while they wait, we want to help. And, it certainly wouldn’t hurt for Sam to walk in his walker more often.’’

He didn’t say then that his family was in need of something far more expensive than a wheelchair. He didn’t say that his small, multilevel ranch is not handicap-accessible, that it has doorways too small for Sam’s wheelchair to fit through, that it has stairs everywhere, inside and out, making it impossible for Sam to go downstairs to his brothers’ room, or out to the playroom, or even to the bathroom or his room alone.

He didn’t say that he and his wife bought this house with the dream that they would gut it and make it a perfect home for Sam with big, open rooms and hallways that Sam could glide through.

He didn’t say that when the real estate market crashed, so did their dream; that they were stuck with two houses for a while and the profit they thought they would have made and then used to renovate this new house disappeared.

All he said when he e-mailed me was “I want to help.’’

Paster carries his teenage son from room to room. When he’s not home, Sam is stuck where he is because his mother and many of his personal care attendants can’t lift him anymore.

Two months ago, the basement of the house flooded, leaving 3 feet of water behind. Last month, in the late October storm, a tree limb tore a hole in the roof.

With all this going on, the Pasters are still not complaining.

They say they’re not the only family that is struggling. “There are lots of people who have lost everything,’’ Hilory Paster says.

But what the Pasters have lost is any hope of getting out from under.

To make the house accessible for their son would cost $170,000. They don’t have the money and have no way of getting it. They work all the time. But they have a kid with special needs and special expenses.

Sam leads a full life outside of his house. He goes to school. He plays sports. He has friends. He gets around.

It’s at home that he’s most handicapped.

His parents know this. But what can they do?

“We’re lucky because we have a big backyard and it’s flat so Sam can be outside with his brothers,’’ his father says.

Lucky to have the big yard, yes. Not so lucky for a 15-year-old who can see the backyard and his brothers playing, but unless his father is home to carry him, cannot get outside.