Lexington natives on a collision course 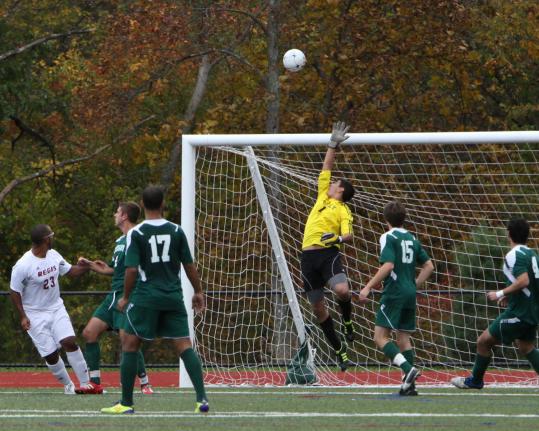 For Perkins, in his first year as a starter for Lesley, after playing through injuries at Lexington High and in his first three seasons at the Cambridge university, the 4-0 win at Southern Vermont College was testament to his courage and perseverance.

Perkins (inset at right), who registered eight saves in the final after making nine stops in a 3-1 win over Daniel Webster in the conference semis, was a standout in Lesley’s run to its first conference title and first NCAA Division 3 tournament berth.

Lesley (15-4-1, 6-2) will face host Babson College (15-2-3, 6-0) Saturday at 11 a.m. in the opening round. Ranked second in New England and 12th nationally, the Beavers were beaten Sunday by Springfield in the New England Women’s and Men’s Athletic Conference final. The game went two overtimes, and was decided on penalty kicks.

The meeting Saturday in Wellesley will feature a Lexington native in the other goal as well, although Babson senior Peter Crowley attended the Brooks School in North Andover.

A junior-varsity player at Lexington through his junior year, the 6-foot-1 Perkins was hampered by tendinitis in both knees. He started two games as a senior.

“Just a great kid, a devoted player and a shot stopper,’’ recalled Lexington coach Dan Rudolph. “I knew he wanted to play in college and I couldn’t be happier for him.’’

It was a two-year-old program when he arrived at Lesley. He played one game as a freshman and four more as a sophomore, and showed promise with a 1-0 shutout win over Curry, but his battered knees, he said, “were just terrible.’’

A dislocated shoulder that second season resulted in two surgeries, which also wiped out his junior season last fall. But over the summer, he played in a couple of recreation leagues and felt relatively healthy for the first time in years.

Lesley coach Paul Vasconcelos said the goalie position was his to earn, and a confident Perkins took advantage of the opening.

“It’s been a great ride for me and for our team,’’ said Perkins. “My knees feel great and my shoulder has its good and bad days, but at least it stays in place. When we won Sunday, everything I had gone through and what we had accomplished hit me all at once.

“I just burst into tears. Win or lose over the weekend, it’s going to be an awesome experience. This is the highlight of anything I have ever accomplished as an athlete,’’ added Perkins, who has compiled a 13-3-0 record with a league-best 1.00 goals-against average this fall, with five shutouts.

Vasconcelos said he had some doubt whether Perkins could make it back, “but he has become a vocal leader and he’s a student of the game. I wouldn’t be surprised if he went on to be a goalkeeper coach.’’

As Babson’s goalie, Crowley can empathize with Perkins. The 6-foot-4, 216-pound Crowley had suffered a stress fracture in his foot as a sophomore at Babson, but played through the pain and put off surgery until after the season. The two have never met, but Crowley said, “you have to admire’’ Perkins for his comeback.

“I sat out a few games my sophomore year and it was tough,’’ said Crowley, Babson’s all-time leader in wins (58). He racked up seven shutouts this season en route to a 0.77 goals-against average. He is a two-time selection to the NEWMAC’s all-conference first team. “I couldn’t play the way I was used to and didn’t practice that much.’’

Crowley said he redefined his game last year and is looking forward to another chance at a postseason win on his home field.

“Sunday’s loss was heartbreaking, as was our loss at home my freshman year in the NCAAs on penalty kicks,’’ said Crowley, who works out in the offseason with Zack Abdu-Glass, a former goalie at Lexington and a junior at Middlebury.

“But you have to wipe the slate clean. We don’t want to go through that experience again. Playing on our own turf is an incredible opportunity and a chance for redemption.’’

Babson coach Jon Anderson said that Crowley “has helped to carry on a long tradition of great goalkeepers at Babson. He is an outstanding young man whose parents - both of whom are Babson alumni - and entire family have been incredibly supportive over the last four years.’’

The other first-round game Saturday at Babson pits Trinity College against St. Joseph’s College at 1 p.m. The Saturday winners play Sunday at 1 p.m.