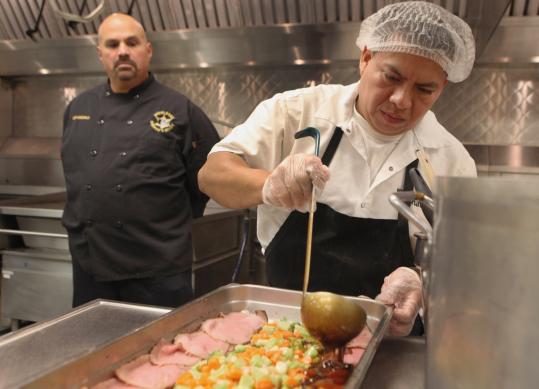 BILLERICA - Martin McLaughlin has spent the past 31 months largely confined to a cell, locked up on a gun charge. The 23-year-old Malden man has had a lot of time to think about the mistakes that led him to a barren bunk in the Middlesex House of Correction.

“I was heading down a wrong path,’’ he said. “Now, I’m working to change direction.’’

For three months McLaughlin has been waking each day by 7 a.m., ready to report to the kitchen. Not for KP duty, but for a rigorous vocational program designed to transform convicts into chefs. McLaughlin and 13 other men enrolled in the Middlesex sheriff’s culinary arts program in July hoping to master skills that will lead to rewarding jobs that pay good wages.

Former car salesmen and construction workers, they know all too well that landing steady work is often difficult, particularly for men whose past misdeeds are documented on a rap sheet. According to the Urban Institute, at least one-third of former prisoners can’t find work in the first year after their release. And about half are locked up again within three years, according to US Justice Department findings.

Despite those grim statistics, McLaughlin and his fellow chefs-in-training are determined to beat the odds. The 14 inmates, having completed 400 hours of classroom lessons and in-kitchen training, will leave the house of correction with a five-year ServSafe sanitation certificate, a prerequisite for a job in the food-service industry, and a certificate of participation from Shawsheen Valley Technical High School. Each inmate also earned 12 college credits toward a degree at Middlesex Community College.

They were to be lauded yesterday for their achievements during a graduation ceremony featuring celebrity chef Ming Tsai, of the PBS cooking program “Simply Ming,’’ and attended by their families. In preparation for the celebration, the inmates planned a menu and prepared a luncheon for the invited guests. It was the first time in months that the men were able to speak to a loved one without being separated by a pane of glass. Allowing such contact during the graduation conveys a clear message about the importance of providing for family.

“The two most powerful and inspirational days I’ve had in office were graduation days,’’ said Peter Koutoujian, a former state representative who was named sheriff of Middlesex County in January. “For many of these men, this is the first time they’ve succeeded at something. They have such a sense of pride, and their parents, grandparents, and children are there to see them being recognized for something positive. There are very few dry eyes in the house.’’

Koutoujian said it costs taxpayers about $40,000 a year to house an inmate, and just $2,700 to provide him with the training required to work in food service. To date, 216 inmates, including McLaughlin, have successfully completed the culinary arts program since its inception in 2006. At least five of the program’s graduates have continued their culinary arts studies at a community college, and several are now working in area restaurants.

“Without question, this program impacts their lives,’’ Koutoujian said, noting the bond that develops among the inmates in the program, who are together six hours a day, five days a week for 12 weeks, learning how to convert units of measure and mastering various commercial cooking techniques. A 95 percent retention rate and a waiting list of applicants speak to the program’s appeal.

In addition to the anecdotal evidence of the program’s success, Koutoujian cited a 2009 study conducted by researchers at Northeastern University that found that the one-year recidivism rate at the Middlesex House of Correction dropped by 9 percentage points between 1994 and 2007 following the introduction of educational and vocational courses, including the culinary arts program.

Koutoujian said he hopes to soon have more data to quantify the program’s success. He has asked doctoral candidates studying criminal justice at the University of Massachusetts Lowell to examine its efficacy. The students will also analyze the facility’s other vocational training programs, which range from a course that teaches inmates how to start a small business to a digital printing workshop, both initiatives that Koutoujian has launched in recent months.

“This jail is not full of bad men; it’s full of men who made bad decisions,’’ said Deputy William Bourgeois, a graduate of the Culinary Institute of America and director of the culinary arts program. “Through this program, we get a chance on a daily basis to make a difference, to give these men the tools they need to succeed.’’

McLaughlin said he is hoping the skills he has acquired in the culinary arts program will help him realize his dream of entrepreneurship. Ultimately, he’d like to have his own food truck or restaurant.

“I’ve always wanted my own business,’’ said McLaughlin. “Now I’m confident I have the dedication and discipline to make that happen.’’