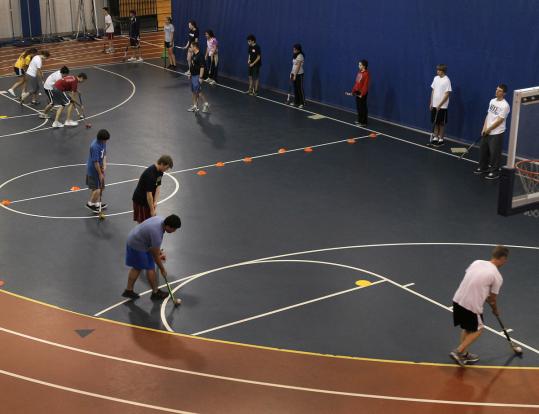 Shrewsbury is aiming to increase physical education to an hour every day for all of its public school students, an unusual move in a state that has been focused on using precious time during the school day to boost MCAS scores.

The school district’s plan- made possible through a $1.4 million federal grant - could prove to be a preview of things to come, or simply an anomaly.

As obesity rates gain more attention and studies show that exercise can enhance academic performance, Massachusetts lawmakers are starting to reconsider the role of physical education in public schools.

Although state law requires physical education at every grade level, no time minimum is specified, and districts looking to add instruction time for academic courses have been known to chip away at gym classes. However, several bills are before the Legislature that would restore exercise’s standing.

One bill would base state standards on national standards, and establish a physical education coordinator for the state. Another bill spells out grade-by-grade standards. A third would set up a pilot program to provide matching grants to at least six public schools to expand their PE programs.

“I really feel that the state does need to step in,’’ said Susan Bradbury, the wellness coordinator in Holliston’s school system.

But even people who agree that more physical activity would be a great goal say there just isn’t time or funding for it, especially as school districts face mounting pressure to meet rigorous academic standards.

“We are trying to put more sand into a bottle that is already full,’’ said Thomas Scott, executive director of the Massachusetts Association of School Superintendents. “It’s an issue of time more than anything, and time is money.’’

The state had a minimum requirement for phys ed classes before the Education Reform Act of 1993 ushered in a new era of high-stakes standardized tests, and school districts struggled to help students do well on the Massachusetts Comprehensive Assessment System exams.

But it was a mistake to focus so heavily on academic subjects to the exclusion of exercise, according to Patricia Degon, director of health, physical education, and family and consumer science for the Shrewsbury school district.

“We’re seeing the impact on a significant percentage of students with sedentary lives, and the obesity that is also parallel with that,’’ she said.

Thanks to the $1.4 million grant received last month, Shrewsbury schools will use recess and after-school time as well as the regular school day to help boost physical education far beyond what they have now, Degon said.

Although a range of authorities, including the World Health Organization, recommend that young people have at least 60 minutes of physical exercise every day, Massachusetts students on average fall well short of that.

In grades 6 through 8, required physical education courses average 88 minutes per week, according to a survey by the state Department of Elementary and Secondary Education, and for grades 9 through 12, PE classes average 111 minutes per week.

A bill filed by state Senator Thomas McGee, a Lynn Democrat, would require schools to base their standards on those of the National Association for Sport and Physical Education, which recommends 150 minutes of physical education for elementary school students every week, and 225 minutes for middle and high school students.

State Representative Alice Peisch, a Wellesley Democrat who is also chairwoman of the Legislature’s Joint Committee on Education, which considered the three bills last month, said it’s too early to say whether any of the proposals is the right fix. But she also said she agrees with the notion that students need more physical activity. The question for her is - again - time and money, and also whether school districts are properly implementing the existing state law that requires physical education at every grade level.

Although funding is a huge impediment, Peisch said, many schools will also need a longer day to accommodate all that needs to be done.

“There is no doubt in my mind that at some point - particularly in those districts where we see a continuing low performance - that the school days will have to get longer,’’ she said.

They also pointed to “Spark: The Revolutionary New Science of Exercise and the Brain,’’ a book by John J. Ratey and Eric Hagerman published in 2008. It argues that exercise boosts learning and helps battle depression, anxiety, and attention-deficit disorders.

“Kids that are fit are ready to learn. Period,’’ said Maria Melchionda, executive director of the Massachusetts Association for Health, Physical Education, Recreation, and Dance. “There is a direct correlation between quality physical education three to five times per week and MCAS testing - not just MCAS testing but comprehension as we know it.’’

In high school, students have to take a physical education class in four out of their eight semesters. The one-hour classes meet three times in every seven-day cycle.

Joanne Grant, the Wellesley school system’s director of fitness and health, said she would love to see students get physical activity every day. She also said she has noticed an increasing interest in physical education as more research shows the benefits, such as reduced health care costs.

“We have a moral obligation to have PE be as important as other academic subjects,’’ said Grant.

But Scott, the head of the statewide superintendents organization, said that though the goal is worthwhile, the money isn’t there. Because of budget woes, class sizes are up and districts have seen cuts in academic support, arts, music, and foreign languages, he said.

“To just simply add this without the reality of what the additional impact would be on the budget and time, it would be irresponsible for us not to say stop.’’

In Arlington, voters approved funding for more physical education through a property-tax increase. Last year, students in kindergarten through third grade had PE only once a week, and the new funding helped increase that to twice a week, said Cynthia Bouvier, the district’s director of wellness and counseling.

But it would be optimal if those students had physical education every day, she said.

“I think we all know through the research that kids who are physically active can actually return to the classroom and learn better,’’ said Bouvier.