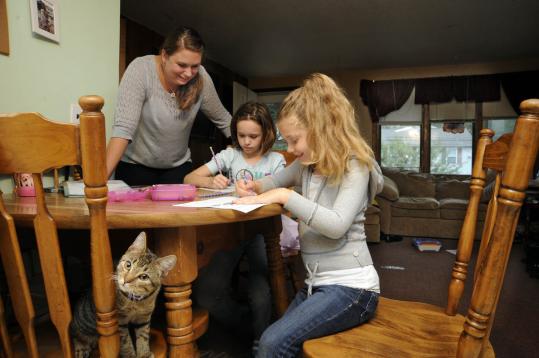 Dracut’s Danielle Laferriere works on homework with daughters Kayla and Brooke. The family hopes to buy a house (below) on the same street. (Photos by Mark Wilson for The Boston Globe)
By Brenda J. Buote Globe Correspondent / October 9, 2011

In the suburbs north of Boston, a growing number of buyers are taking advantage of low interest rates and affordable housing prices, boosting sales of single-family homes.

New data from The Warren Group, a Boston company that tracks local real estate, show that housing sales in the 57 Massachusetts cities and towns in the Globe North region climbed in July and August.

“Although inventories are down compared with what they were a year or two ago, the interest rates are unbelievable,’’ said Tom Courtney, an agent with Remax Prestige in Westford and president of the Northeast Association of Realtors, an organization that encompasses 15 communities stretching from Littleton to Boxford. “The agents are very busy. By the end of the year, we should be even with, if not above, where we were for 2010’’ for single-family home sales.

Still, local experts were quick to note that the year-over-year uptick in home sales may not reflect a surge in buyer interest, but rather an anomaly in last year’s housing market. Last summer, home sales slowed dramatically following the expiration of the federal homebuyers’ tax credit, which motivated many to buy during the first six months of 2010. In fact, 2010 was the slowest August for Massachusetts real estate sales in two decades, with statewide sales of single-family homes sliding below the 4,000 mark for the first time since 1987, when The Warren Group began tracking data.

“There was a rush to close deals before the end of the tax credit, in June 2010, said Somerville real estate agent Stephen J. Bremis. “Sellers were holding firm on their prices, and buyers ended up paying more for a property than they would have had they waited for the credit to expire. For many buyers, the credit was really an artificial savings.

“After the credits dried up, there was an immediate slowdown that lasted for about a month and a half,’’ said Bremis. “Things have picked back up, but buyers still have a great deal of control. A lot of it has to do with location. Hot locations, like Davis Square’’ in Somerville “are still hot. Locations that were laboring are still laboring.’’

Sales of single-family homes in the region for the first eight months of 2011 were down about 12 percent compared with January through August of last year, The Warren Group data showed. The biggest decline in sales occurred in upscale Boxford, where 28 homes sold in the first eight months of 2011, compared with 65 in the same period last year, a decrease of about 57 percent. Essex and Groveland also experienced declines of 50 percent or more.

Still, the local housing market continues to do better than many other areas of the country, with a total decline in property values of about 15 percent since the area’s housing peak in 2005. Nationwide, housing values have plummeted about 31 percent since the peak, according to the S&P/Case-Shiller home price index. The index tracks repeat sales and is regarded by many industry insiders as the best barometer of the real estate market’s health.

“If you price your house right, it will sell,’’ said Dan O’Connell, an agent with Remax Prestige in Dracut, where sales this year are outpacing last year’s figures. Between January and August this year, 134 homes were sold in the former dairy town, up from 128 during the same period last year.

Dracut is among the 19 local communities where the median home price - or midpoint price - is up compared with last year, rising from $219,550 in August 2010 to $249,900 in August of this year. Still, O’Connell said, there are bargains to be had. Home prices remain low, in part because of an abundance of foreclosures and short sales - when the lender agrees to take less for the home than is owed, he said. In July, 1,400 foreclosures were initiated in Massachusetts, the highest level recorded for a one-month period so far this year, according to The Warren Group.

The impact of short sales and foreclosures on local prices is evident: Between August 2010 and August 2011, median home prices have fallen in 34 of the 57 local communities. Merrimac saw the biggest dip in the median price, from $442,000 to $277,500, a drop of 37 percent, according to The Warren Group.

Lower pricing is prompting some to insist on a steal, rather than a deal, said Courtney. “They want perfection,’’ he said. “They have a home inspection and if a small issue comes up, it sinks the deal. The agents have to work that much harder and find the buyers another home.’’

According to local agents, a growing number of contracts are canceled before a sale is finalized. Sometimes, as Courtney noted, buyer ambivalence causes that. But often, lower appraisals are the culprit, scuttling loans.

Local agents hope sales will pick up, given the combination of lower prices, more foreclosures, and cheap mortgage rates.