If little-known today, the Clicquot Club Co. in Millis was the toast of soft-drink circles for half of the 20th century 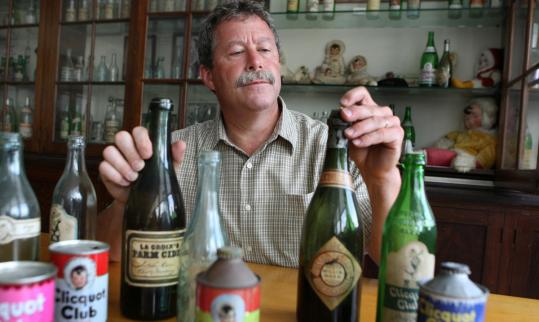 MILLIS - It’s right behind the Ann & Hope outlet store on Main Street, diagonally across from Roche Bros.: a brick smokestack that says “Clicquot.’’ A generation or two of townspeople may have no idea what it means.

For decades, the site was home to the Clicquot (pronounced KLEE-ko) Club Co., one of the nation’s largest soft-drink manufacturers.

“Clicquot Club WAS Millis in its heyday,’’ says Paul LaCroix, president of the Millis Historical Society. “Everybody in town worked either at Clicquot Club, Herman Shoe Co., or Safepack Mills,’’ which made waterproofing and roofing materials.

LaCroix has a personal interest in the company. He traces its roots to 1864 and the LaCroix Fruit Farm, where his great-grandfather, Charles LaCroix, made a sparkling cider. In the 1880s, Henry Millis (son of Lansing Millis, after whom the town was named) suggested he call it “Clicquot’’ after a famous French champagne, Veuve Clicquot. Before long, there was a line of Clicquot Club soft drinks, including ginger ale.

“I’ve been researching this all my life,’’ LaCroix says. “Family pride. It was calling me to do it so I did it.’’ He hopes some day to publish a history of the company.

Clicquot Club really took off when Horace A. Kimball bought it in 1901 and put his son, H. Earle, in charge. The younger Kimball ran the company until his death in 1952. A resident of Providence, he was a familiar sight being driven to and from the plant in his .

“Kimball was almost a god in town,’’ LaCroix says. “He was a real doer, a big believer in advertising.’’ The company promoted itself heavily in newspapers, magazines, and on billboards, and the Clicquot Club “Eskimo Boy’’ became one of America’s best-known advertising symbols.

“From 1924 to 1926, Clicquot Club had the largest animated sign in the world,’’ in Manhattan’s Times Square, LaCroix says.

Clicquot Club also jumped with both feet into radio. For several years in the 1920s and ’30s, it sponsored a national network show featuring the Clicquot Club Eskimos orchestra.

The Millis operation grew to cover more than 20 acres, according to an early advertising circular, with a private railroad siding and its own depot, in a section of town that came to be known as Millis-Clicquot. The company owned five wells, the source of the pure spring water cited in Clicquot Club’s advertising.

“From 1903 to 1907, Clicquot Club and the Phenix Nerve Beverage Co., across the street, were shipping 25 carloads of soda every week,’’ LaCroix says. Clicquot Club products were shipped across the country and eventually around the world.

Clicquot Club’s signature product was ginger ale. From 1910 to 1940, according to LaCroix, it was the largest ginger ale manufacturer in the world. Its lineup of products included orange soda, root beer, birch beer, sarsaparilla, “everything you could think of, all different kinds of stuff,’’ LaCroix says. But ginger ale was king.

“It was a very profitable business,’’ LaCroix says. “It was an easy way to make money.’’

“Clicquot Club gave the town a sense of pride,’’ he says. “A bottle you put the label onto might be sold in, say, the Netherlands.’’

So what happened to Clicquot Club?

“When Kimball died it started going downhill, but also around that time Coke and came into their own,’’ LaCroix says. “Other flavors were invented, and people got sick of ginger ale.’’

After Kimball’s death, Clicquot Club wound up in the hands of his lawyer, Thomas Black Jr.

The company was sold to the Cott Beverage Corp. in 1969, and the Millis plant was shut down in 1980.

“When Clicquot Club went under it was a real disappointment,’’ LaCroix says. The original buildings are gone but remnants are still there, used as warehouse and storage space. Clicquot Club memorabilia - bottles and cans, advertisements, photos, - is on display in the town’s headquarters, the Veterans Memorial Building, at 900 Main St.

LaCroix sold his Clicquot Club collection to the town several years ago, but he’s always on the lookout for more. “I love finding the cool pieces’’ online or at flea markets, he says.

A few years ago, LaCroix says, he offered $1,800 for a 1954 Clicquot Club cone-top quart can he spotted on the auction website.