After 19 years in prison for rape convictions, Dennis Maher is freed with help from the Innocence Project and DNA. Now he is living his dream in Tewksbury. 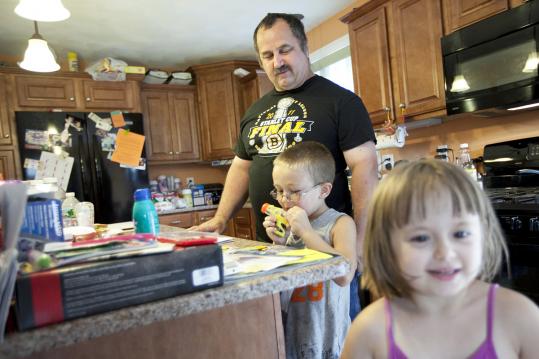 Dennis Maher sits in a black cushioned desk chair in a family room stockpiled with toys. He has wild steely hair, a bushy gray beard and calm eyes. His 5-year-old daughter, Aliza, is pulling a plastic Little Mermaid-themed vanity across the smooth hardwood floor with surprising speed. Maher watches patiently as she clicks a purple flower into place; the tiny vanity begins to whir and twinkle while the distorted strum of a wistful harpsichord completes the magic. Aliza shrieks with delight and jumps onto Maher’s lap, burrowing he r child-sized glasses in his broad chest.

While in prison at the Massachusetts Treatment Center for sex offenders in Bridgewater, Maher told his treatment center therapist that he would only do a release plan - a hypothetical plan for life after incarceration - verbally because he still believed, as he did for nearly half his life, that he might die behind bars. His plan went like this: Get released on DNA. Take two months to readjust to society. Meet a woman. Get married. Have children. Buy a house.

He received a life sentence in 1984, charged with raping two women - one in Lowell and one in Ayer - and sexually assaulting a third woman in Lowell. Maher, who fit the assailant’s description and was identified as the attacker by all three victims, spent the next 19 years in prison. In April 2003, after conclusive DNA testing proved Maher’s innocence in both rape cases, prosecutors agreed to drop all charges against him, with Middlesex District Attorney Martha Coakley calling the convictions a “miscarriage of justice.’’

In the eight years since his exoneration, Maher has managed to achieve every aspect of his dream - marriage, kids, and a three-story home in Tewksbury. At the same time, perhaps even more remarkably, he has managed to avoid the pitfalls of anger.

“I got over losing the 19 years of my life,’’ says Maher, 50, in an even tone. “I don’t try and make up for it because I can’t. The best that I can do is just go forward. Don’t hold the anger. I can’t be an angry miserable person around these two.’’

He is referring to his two children, Joshua, 6, and Aliza, who was named for Aliza Kaplan, Maher’s Innocence Project attorney.

“She’s the first number in my phone,’’ says Maher of Kaplan.

Kaplan, who is now a professor at Lewis & Clark Law School in Oregon, said in a phone interview from her office, “He really has done so much with his life and is so positive, has a beautiful family and successful work and, sadly, this is not the situation of most people because of the lack of services and jobs.’’

Although Kaplan sees improvement in wrongful conviction cases like Maher’s, she said the probability of an innocent person going to jail is far greater than the probability that that person will ever be exonerated.

In Maher’s case, it seems the stars aligned. In the month following his release, Maher landed a job at - where he still works - and met his wife, Melissa, on the Internet.

“She was a paralegal at the time so she did a background check on me, and read up on me,’’ says Maher.

“Well, no, actually I have clerks that I know,’’ Melissa calls from the entryway to the kitchen.

“Well I was totally honest with her when I got there,’’ says Maher. “I showed her pictures of my release, I told her what happened to me. I don’t hide it.’’

“No. No, you don’t,’’ says Melissa with lighthearted exasperation.

“So that might have been what freaked her out.’’

“No, I knew I was in trouble when I first met you,’’ says Melissa. She smiles.

As the 127th person exonerated by the New York-based Innocence Project, Maher says he volunteers as much of his time as possible to public speaking, conferences, and other events involved with the cause and will continue to do so as long as they need him.

In 2005, Maher was featured in the film After Innocence, a poignant documentary detailing the cases of eight wrongly convicted men and their lives after exoneration. For Maher, telling his story and being around others who can relate to his experience is also therapeutic. Herman Atkins, a fellow Innocence Project exoneree who was also featured in the film and close friend of Maher’s, said in a phone interview from California that he first met Maher at an Innocence Project conference.

“I admire his strength, I admire his humor. I admire his dedication to survive and to succeed given what he has experienced,’’ said Atkins. “He has a subtle disposition in life that puts you at ease in spite of what he’s experienced, when you think that someone would be hostile and bitter.’’

When Maher was released in 2003, he received his freedom but little support or recognition from the state.

“When someone goes on parole, there’s all sorts of support triggers already,’’ says Maher. “They can get job training, go on welfare, there are things to help them out. When I got out there was nothing for an exoneree.’’

Although the money will never make up for the time lost behind bars, Maher says the compensation has allowed him to provide for his family financially without as much worry, although he still chooses to work 40 to 50 hours per week.

He was also able to fulfill his mother’s dream of taking everyone in his family to World.

A framed picture hanging above the couch shows Maher laughing in earnest through an untamed beard, towering above the rest of his family in a group shot taken at Epcot Center, his right arm around Goofy.

As far as Maher is concerned, family is everything. He knows his parents, brothers, and sister all did the time with him. But Maher tries not to dwell on the past. He is currently focusing on clearing his name permanently from all DOC and police station records and is optimistic, but says it has been a battle.

His military record was redeemed several years ago, although, for Maher, that may never be enough.

“I was a soldier. I was a defender of my country. And that’s something I can’t get back. It was my goal to retire from the military, but that never happened,’’ Maher says without emotion.

At 23, Maher had a different plan. He appears to be thinking back to that far-away time on the other side of his life, of his younger self, walking unknowingly to the edge of a 19-year-long void.

“I was going to do 20 years in the military and retire. And then start a second career at 37,’’ says Maher. “I had reenlisted to come home, which was a big mistake. You know, I came home and ended up going to prison, through no fault of my own, but . . . ’’ His voice trails off. It is not a place he wants to go.