Stacey Laliberte and Stephen Suthowski, hobbyist fire-eaters from Rhode Island, held hands and gazed at each other with bated breath as justice of the peace Michelle Lydon recited their vows - through their car window.

They haven’t been the first, nor will they be the last, to be married in the parking lot outside of Lydon Chapel, a large, 18th-century, white wooden building that has been a birthing house, a funeral parlor, and now is a chapel for both funerals and weddings.

The drive-through ceremony was something Lydon thought up herself when she purchased the home from her father five years ago. It was out with the old funeral parlor sign, and in with the weddings, which would be conducted upstairs in a sunlit space a door away from the embalming room.

These days, Lydon will conduct a wedding just about anywhere - on boats, in other communities, in the front yard of her home, or next to the chapel’s bubbling waterfall. And for those who opt for a drive-though wedding, happy couples of all backgrounds go to the parking lot next to busy Hancock Street, say their vows and kiss, and in seven minutes are on their way to a new life.

“I was hoping [it would evolve into this]. Everyone was telling me I was nuts and crazy, but I didn’t care,’’ Lydon said.

The wedding business has almost equaled the funeral business for Lydon, as more people find out what’s going on in the inconspicuous Wollaston building. Now there are weddings, both drive-through and traditional, multiple times a week.

The weddings and funerals happen in the same building even within the same day - dearly departed out one door, dearly beloved in the other, Lydon moving back and forth between the two.

It was a concept that piqued the interest of Powderhouse Productions, a Somerville agency known for its documentary and reality-TV work.

“It had both - the juxtaposition of these two emotional worlds,’’ said Mary Mullaney, Lydon’s producer. “It’s like a ‘bridezilla’ aspect.

“People are so emotional for both weddings and funerals . . . and this is one woman who took it upon herself to tackle them both.’’

Powderhouse approached the chapel for a show and eventually signed up Lydon and the employees last September. By November, dozens of crew members had descended upon Lydon Chapel to be a part of the everyday controlled chaos.

Although on TV, day-to-day life becomes a bit exaggerated, the cast of characters at the chapel left little to be desired.

Like Lydon’s daughter, Roberta, the reluctant eventual successor to the Lydon business, or Quincy native Billy Reilly, the theatrical, expressive interior designer who makes it known when he enters a room.

As for the plot, “you couldn’t make this stuff up,’’ Lydon likes to say.

There was the time the hearse got towed because it was illegally parked, Lydon frantically making sure there was no body in the back, or the New Year’s Eve when a woman got married with curlers still in her hair - she had someplace to go, Lydon said.

At the center of it all is Lydon herself, perhaps the main reason the chapel has seen such success.

“It’s her personality,’’ said Rose Pope, Lydon’s assistant. “She’s [also] in a business where there’s a lot of men. A woman adds a different touch and different sensitivity to a time of sadness. And on the other hand, the happiness that goes along with the wedding - they just love her to pieces.’’

Her personality has even spawned more business. Married couples ask Lydon to preside over the death of a loved one; relatives attending funerals use Lydon for weddings.

Endings and beginnings occur in a cycle, all with Lydon at the helm.

To some, Lydon is their “official justice.’’ She married Braintree couple Erick Soares and Luciene Leonello at the beginning of August, a year after marrying Luciene’s brother, and will marry Luciene’s sister, Clariana Martins, next year.

The phone has been ringing off the hook, though not one of those calls was to move ahead with the reality show. “Till Death Do Us Part’’ was even reportedly on Oprah Winfrey’s desk, yet the chapel family is still waiting for some good news.

But Lydon doesn’t need a reality show to pump up her business. Lydon guesses she performs about 125 weddings a year, charging $75 for a drive-through or $275 for a more-traditional ceremony in the city.

Those prices make a lot of sense in these tough economic times, but Alexis Eliopoulos O’Mara, a wedding planner at Unique Weddings by Alexis, said a typical wedding still costs thousands, or tens of thousands, of dollars.

“People may be cutting back on some items, but overall wedding budgets are not diminishing,’’ she said.

With prices remaining high, couples looking for a low-cost option have little to choose from. And though the economy may be pushing some business her way, Lydon says her success isn’t just happenstance.

“So many people in this business don’t treat it as a business. They treat it as a nice thing, and it is a wonderful thing . . . but I’m turning it out!’’ Lydon said. “I put the marketing out there. We’re bringing new ideas out . . . we bring it to fruition, and it’s grown.’’

The drive-through wedding is just one of her services, and she’s believed to be the only person offering it in Massachusetts. Since she began it five years ago, Lydon estimates she has presided over more than a hundred drive-through ceremonies.

She’s seen them arrive in the front seat of convertibles or Toyotas, or the back seat of a limo. She instructs them to look into each other’s eyes. They promise to love each other until the world ends. They kiss with Lydon’s blessings, then leave as quickly as they came.

The couples especially appreciate a service that is convenient, close to home, and unique.

“We both had the big, puffy experience [with our first weddings],’’ said Scott Cayon, from Quincy, after his drive-through marriage to Emily Oliver, from Woburn. “This time it’s not about that. It’s meeting the right person, being with someone you love. Something quiet and intimate . . . and the ceremony was more than I expected.’’

That happiness, or closure, is exactly the reason Lydon spends seven days a week at her job, working with thousands of families and couples, even though there are so many she can hardly remember all of their names.

Despite the constant motion, Lydon shows no signs of weariness. And as the fire-eating couple drives off, or as the family of a deceased hugs Lydon goodbye, she knows there will be more behind them.

Jessica Bartlett can be reached at jessica.may.bartlett@gmail.com 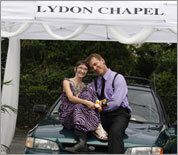