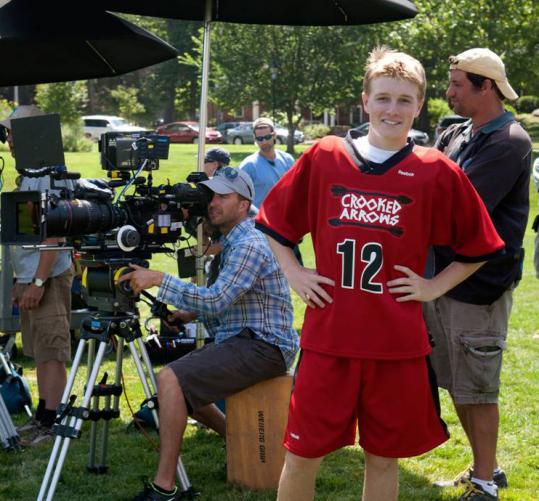 Jack van der Velde has always dreamed of becoming a professional actor. But until this summer, his few credits included performing in the drama club at St. Sebastian’s School in Needham.

In June, the 16-year-old answered an open casting call in his hometown of Wellesley to audition for a film. The producers told him they needed a lacrosse player for a movie that they planned to shoot this summer on the North Shore.

Both van der Velde and his older brother Murphy - who will play lacrosse as a freshman at Harvard this year - got parts in the movie.

For the last few weeks, the van der Velde brothers have risen before dawn to drive to the North Shore, and take part in orchestrated lacrosse scenes on fields in Topsfield and Newbury’s Byfield section. The film, “Crooked Arrows,’’ focuses on a Native American lacrosse team that competes against better-trained prep schools.

“It’s been totally unbelievable,’’ said Jack, who hopes to play on the varsity lacrosse team at Wellesley High School this year. “I’ve always wanted to be a comedic actor, so to start off like this will help me strengthen my dramatic skills.’’

His mother, Nan van der Velde, who has been driving to the set each morning, is equally stunned at her son’s overnight ascendance from a fledgling middle school actor to someone with a key part in a Hollywood film.

“When I sit in the producer’s tent and see his face come up on screen, it’s hard to believe my eyes,’’ she said.

Her youngest son plays a significant role in the final scene: a championship game slated to be filmed Saturday at St. John’s Prep in Danvers.

The film also features dozens of male and female lacrosse players from across the state who landed parts as extras.

Natick residents include Bridget Birden and Colby Chanenchuk. Maggie and Elizabeth Paul are from Weston, and Hope Hanley is from Dover.

The Saturday shoot will be the climactic scene in the movie, and the producers have contacted high schools, youth coaches, and leagues in the area to recruit families and lacrosse players to fill the stands as extras.

“The movie is a love letter to lacrosse,’’ said producer Mitchell Peck, who played high school lacrosse in Richmond, Va.

Peck and J. Todd Harris, who also serves as the film’s producer, are hoping the movie brings increased exposure to lacrosse, already one of the fastest-growing sports in the country. Harris said the $8 million film is being funded by lacrosse aficionados and supporters. It is scheduled to be released next year.

Peck said area residents who want to take part in the filming Saturday should register online at www.crookedarrows.com. Filming will begin at 7 a.m., and lunch will be provided. He also said shirts, lacrosse sticks, and other lacrosse memorabilia from the movie will be given away during the filming.

Dom Starsia, who has won four NCAA national championships as the University of Virginia lacrosse coach, will be filmed in the stands. Other lacrosse mentors playing roles as scouts that day include Brown head coach Lars Tiffany, and Harvard head coach Chris Wojcik.

One of the film’s extras, Kieran Kavanaugh, who runs a lacrosse training school in Westford, said he hopes it will help boost popularity for the sport the same way other Hollywood movies have helped youth sports.

“I’m part of lacrosse history, and that’s something a true lacrosse player can be proud to say,’’ said Kavanaugh.

Steven A. Rosenberg can be reached at srosenberg@ globe.com.