From a rare disease, an uncommon charity 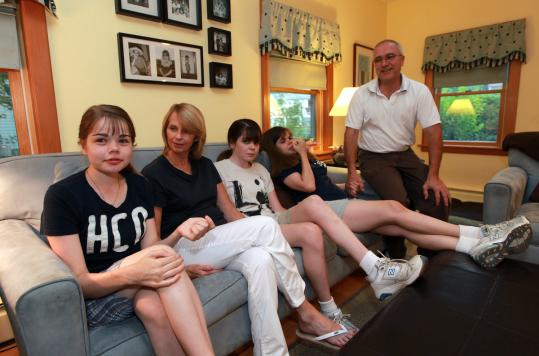 Fifteen years ago, when Paul and Nancy Burke first learned their oldest daughter had Sanfilippo syndrome, it was so hard to find out anything about the rare but fatal degenerative disease that they relied on research from a Belmont neighbor who worked at Harvard University and had access to a medical library.

Over the last decade and a half, as all three of their daughters were diagnosed with the syndrome, the Burkes decided to increase public awareness about the disease and raise money themselves to finance research. They created the JLK Sanfilippo Research Foundation - named after their three daughters: Jillian, 24, Lindsey, 21, and Kelsey, 18.

In the past year they have collected about $50,000. They donated $20,000 to a University of Montreal researcher who credits the seed money from the Burkes and another family foundation for helping him conduct preliminary research that yielded a recent five-year $750,000 grant to study Sanfilippo, which causes children to regress and eventually slip into dementia, and similar diseases.

“What do you do if your child has this extremely rare syndrome and there isn’t millions of dollars for research?’’ said Nancy Burke, a preschool teacher. “Then it gets left up to the families, like us, who form their own family foundations and try to raise as much money as you can.’’

Sanfilippo syndrome is a rare, inherited condition in which the body is missing an essential enzyme and cannot break down long chains of sugar molecules. The remains of the sugar chains stay in the cells, causing more and more damage. As the condition progresses, children lose skills and begin to regress, showing delayed development and intellectual abilities.

The children often do not live beyond their teens. When the Burkes’ oldest daughter, Jillian, was first diagnosed 15 years ago, they were told the average life expectancy of children with Sanfilippo syndrome was 14.

Now all of their daughters are older than that. But they are also slipping away. Lindsey, their middle daughter, had been doing the best but suffered a decline last winter. One day in January, she woke up crying and said her stomach hurt. She had difficulty swallowing, she stopped eating, and grew dehydrated. She spent 26 days in the hospital, where a feeding tube was eventually inserted. She lost 40 pounds. Her vision deteriorated. Her speaking diminished.

“Now she’s not really speaking much at all, which is really hard,’’ Nancy Burke said. “I miss her and she’s here. I miss talking to her. I miss seeing that real sparkle in her eye, and this little laugh that she used to do. And now she’s just so different, so different.’’

Jillian, the oldest daughter, began to have trouble in school when she was 6, and was diagnosed with attention deficit disorder. But the medicines she was prescribed didn’t help, and the Burkes started taking her to specialists. It wasn’t until five days before her ninth birthday that they got the final diagnosis. They had never heard of Sanfilippo syndrome, and they were stunned.

“They wanted us to have the other two girls tested immediately,’’ Nancy said. “We decided not to do it. We just didn’t want to hear it three times in a row.’’

There was no cure, and no real treatment for the condition that would make a diagnosis helpful. But as the girls grew older, and the Burkes saw their younger daughters displaying the same symptoms, Paul and Nancy knew that all their children had Sanfilippo.

The official diagnosis for their two younger daughters didn’t come until 2004, when the family went to Duke University to consider taking part in an experimental stem-cell transplant procedure. The Burkes eventually decided the clinical trial was too risky.

Instead, the Burkes’ daughters are treated primarily for their symptoms.

When the Burkes first learned Jillian had Sanfilippo syndrome, information about the condition was hard to come by. The Internet was young, and libraries were still little help.

“If you have a child that has a very rare syndrome, it’s extremely frustrating and difficult because there’s nowhere to turn,’’ Nancy said. “There’s autism groups and there’s cancer support groups. But you have something that’s very unique and very rare, you really feel alone. It’s very, very difficult.’’

Sanfilippo is uncommon, affecting about 1 in 70,000 children, and the Burkes’ children have an even rarer type of the disorder, called Sanfilippo C.

“To give you a sense of how rare it is, one researcher said, ‘You’d be lucky to find 100 cases worldwide,’ ’’ said Paul Burke.

The Burkes found only 17 families in the United States who had children with Sanfilippo C. “Then we went online and found other families, of all places, on Facebook,’’ Nancy Burke said. “We found a family from France, a family from Portugal, a family from Spain. We’re all trying to work together.’’

The Burkes also hope to help fund a natural history study about children with Sanfilippo C, creating a database of information about this variation of the disease, including how it progresses.

“But how many bake sales and bowling fund-raisers and car washes can you do?’’ Nancy asked. “It does all add up eventually. But it’s very frustrating because research costs a lot of money.’’

The family’s foundation contributed $20,000 to Dr. Alexei Pshezhetsky, the University of Montreal researcher whose lab discovered the gene responsible for Sanfilippo and similar diseases.

In a telephone interview, Pshezhetsky said the money from the Burkes and another family foundation was a key factor in getting funding from the Canadian Institutes of Health Research. Grants for research on rare, genetic disorders are difficult to come by, he said. So he welcomes families getting more involved in the process.

“Now they are raising funding and they call for grant applications,’’ he said. “They meet researchers, they talk to them. They decide to support this researcher or another researcher. I think it’s very encouraging.

“In this area, every dollar counts.’’

A fund-raiser for the JLK Sanfilippo Research Foundation is planned for Sept. 25 at the Woburn Bowladrome. For details, visit www.jlksanfilippofoundation.com. Kathleen Burge can be reached at kburge@globe.com.