Simulator helps teens behind the wheel focus on road hazards, not phones or food 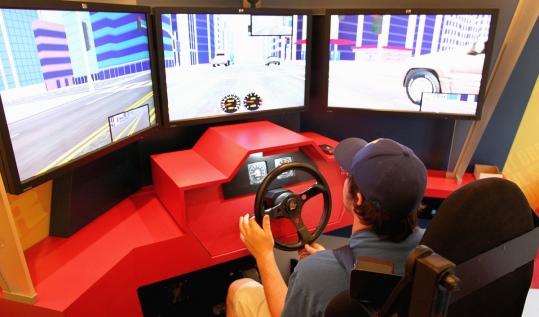 The flashy red Corvette glides down a divided, four-lane cityscape at about 35 miles per hour. The road is thick with stoplights, moving cars, parked cars, moseying pedestrians.

The cellphone on the dash suddenly buzzes; the young driver reaches for it, checking an incoming text. Then, eyes arrowing back and forth from the road to his phone clasped at wheel level, he punches in a reply.

Up ahead, a truck is stopped at a light. The Corvette’s driver continues texting, not noticing the truck until he’s almost on top of it. He brakes, but still rear-ends the truck with a crunch of metal and shattered glass.

After his time in the virtual driver’s seat on the tour’s recent stop in Beverly, Codair, of Hampton, N.H., pronounced: “I won’t text [in the car] - no way.’’

It seems a lot like a video game. Participants sit at control panels mocked up like mini Corvettes with steering wheels, gas pedals, brakes, and giant screens in front of them. But the object here isn’t destruction, it’s distraction.

Quincy-based Arbella Insurance Group’s Distractology 101 teaches the dangers of “gabcidents’’ (the result of paying closer attention to a cellphone conversation than the road); “sender benders’’ (collisions that result when drivers are distracted by sending text messages); “snackcidents’’ (in-car eating being the culprit); and “spincidents’’ (what might happen to those who fiddle too much with the radio or an MP3 player instead of watching the highway).

Using technology developed by Donald Fisher, an engineering professor at the University of Massachusetts Amherst, the tour has traveled all over Massachusetts, Connecticut, and Rhode Island since April 2010. The 36-foot-long, bright yellow trailer has been parked at roughly 50 locations - including high schools and police and fire stations - and approximately 2,600 youths have fastened their seat belts for 45-minute “DistractU’’ sessions.

“Drive cautiously, slow down at intersections, don’t text and drive, don’t use your cellphone, because it really does distract you,’’ 17-year-old Lawrence Gonzalez of Bedford said of what he learned after smashing into stopped cars, clipping pedestrians, and dodging wayward motorcycles during a session in Beverly.

Such revelations are refreshing, Donohue said, but he’s realistic about the enduring effects - young people are “addicted’’ to cellphones, and he doesn’t expect that they’ll immediately extricate themselves from them.

The goal is to “at least get them to start thinking about it, and talking about it among their peers,’’ he said. “Education is such a huge part of attacking this problem.’’

It’s a problem that, according to statistics, now affects hundreds of thousands: In 2009, nearly 5,500 people were killed and almost half a million injured in accidents related to distracted driving, based on data from the Fatality Analysis Reporting System. Of the fatalities, 18 percent involved the use of a cellphone. The greatest proportion of distracted drivers are under age 20, according to the National Highway Traffic Safety Administration.

The latter statistic spurred Arbella to launch its tour. According to Donohue, a few years ago, the company’s claims department started seeing an alarming spike in crashes involving teenagers who were multitasking behind the wheel.

Still, it’s not an age-specific problem - Gonzalez’s aunt, Elizabeth Nieves of Beverly, for example, noted a few close calls of her own.

“I could pay better attention,’’ said Codair’s grandfather, Bill Fabri of Ipswich. “It’s amazing how easily you can be distracted.’’

Has he looked down at his phone when it rings in the car? Of course, Fabri said. However, he pledged, “I’m going to stop doing that. I’m going to turn the phone off, period.’’

While watching the simulators in action, meanwhile, his pledge was not to be a backseat driver. He sat back as his grandsons, Kenny and Andrew, 16, belted themselves in.

Three screens surrounded each of them, one representing the windshield with a speedometer and a picture-in-picture serving as a rear-view mirror and the other two their side-view mirrors, as they drove through cities and suburbs.

In two scenarios, tour instructor Topher Paone texted each one a two-part question: “Who is your favorite athlete, and what sport do they play?’’

The first time they simply had to read it (both crashed into stopped cars in front of them while doing so); the second time they had to get a little more involved by texting back (again the results were screeching brakes and wrecks).

Still, it wasn’t all about distraction: Simulations also focused on common obstructions, as well as hazards brought on by other drivers.

In one instance, the brothers drove unperturbed along a windy road, then were greeted by a “Stop Ahead’’ sign. The stop was actually just ahead - around a blind curve.

It got Kenny; there was a tinny crashing sound as he rear-ended another car.

“I saw it, I just didn’t think it was that close,’’ the teenager replied.

In other simulations they had to react to motorcycles blowing through stop signs, make left turns with obstructed views, and watch for pedestrians in crosswalks blocked by cars.

Paone said the simulations try to ensure that drivers are acutely aware of the environment around them, unencumbered by phone calls, texts, blasting music, or lunch-on-the-go.

“People don’t always follow the rules, but you have to,’’ Kenny Codair said of the experience. “It’s just being more aware. Don’t assume anything.’’