With the launch of the wooden schooner Ardelle, North Shore adds another jewel to its crown 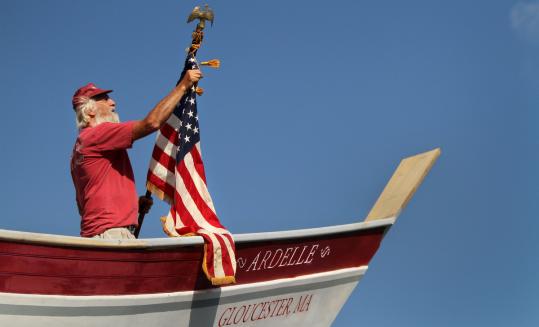 Steve Willard of Marblehead unfurls a flag on the new two-masted schooner Ardelle, just before its launch in Essex. (Photos By Jessey Dearing for The Boston Globe)
By Joel Brown Globe Correspondent / July 17, 2011

ESSEX - At high tide, it came down to teamwork and muscle.

Perhaps a thousand spectators watched from the Essex Shipbuilding Museum across the water last weekend as traditional shipbuilder Harold A. Burnham prepared to launch the 55-foot schooner Ardelle into the Essex River.

An announcer explaining the process called for quiet as Burnham and a dozen or so grimy volunteers carefully jacked the hand-built wooden boat, tipping it to lean on its port bilge. This was an old-school Essex side launch, providing extra buoyancy to keep the vessel from getting stuck in the muddy shallows, as it might if it went straight in on the keel.

Teenagers jumped off the nearby Route 133 bridge to swim. A policeman on a jet ski kept boaters at a safe distance. Someone handed out slices of watermelon.

Burnham and his crew used sledgehammers and chainsaws to remove the blocks holding the boat in place, one by one. “Start at the stern and move to the bow, that’s all I know,’’ Burnham said for the benefit of the many friends and neighbors watching in the cluttered backyard between his house and his barnlike workshop abutting the water. “There’s no manual.’’

He stepped in by himself to knock out the last block. With a single line attached to its bow, the boat began to move. People took cellphone pictures and toasted with beer cans.

After sliding a foot or two down the greased rails, the vessel stopped.

Burnham grabbed a huge jack and lifted the bow of the boat a few inches. It started moving - and stopped again. Groans of disappointment and shouts of encouragement from the crowd.

Burnham waved in a handful of his guys, and they all got their hands on the bow and pushed. And then the boat began to move on its own, gathering speed and sliding down into the water with a surprisingly small splash. It tipped to one side and then the other before bobbing upright, to cheers and applause.

Cue the guy with the cannon.

“That went really, really well. [Pushing] is a normal part of it,’’ Burnham said afterward, grinning. “With that type of launching you never know.’’

The launch was last Saturday. Two days earlier, there was still a lot of work to be done on the boat at Burnham’s property on dead-end Burnham Court, which is both the Burnham Boat Building shipyard and his home. More than a dozen volunteers, from teens to retirees, swarmed the scaffoldings around the Ardelle in the hot sun, painting and measuring, sawing and sanding.

They would work past midnight on the eve of the launch to finish in time.

“There’s a lot of positive energy around the launch of a vessel,’’ Burnham said. “The number of friends and well-wishers who have come out to help is humbling.’’

Burnham’s family has been part of the business in the neighborhood since the 1600s. “The shop was originally built by my great-great-grandfather - two or three greats - about 1830,’’ said Burnham, 44. The Burnhams and lots of others were busy in the 18th-century heyday when hundreds of fishing schooners were built in Essex.

By the 1940s, business had fallen into a lull that didn’t ease until the 1980s, when interest in wooden boats began to revive. But the industry is very different now.

After motor and mast are installed and a Coast Guard inspection passed, the Ardelle will carry passengers out of the Gloucester Maritime Heritage Center for sightseeing and educational trips, a new member of the area’s cultural tourism fleet, which nets dollars instead of fish.

Burnham hopes that will happen by the middle of next month: “The boat won’t make any money tied to the dock.’’

Burnham has built and launched the well-known schooner Thomas E. Lannon and the Lewis H. Story, among others. But there hasn’t been a new commission lately, and last September he began to build the Ardelle for himself, milling timber on site from trees provided by local tree contractors.

“I am trying to keep this kind of shipbuilding going,’’ Burnham said. “Building wooden ships is a huge part of our culture. Unfortunately, it’s very rare today, so there’s not a lot of opportunities to do this. This is the first ship we’ve built in five years. The hope is to maintain the shipyard and the equipment and be available to continue to build wooden boats and ships for those that want them. The hope is that this boat will help sustain the business.’’

The Ardelle is a pinky schooner, as defined by its distinctive stern, a type of boat that’s smaller than some schooners but known for its seaworthiness. Its design is based largely on the pinky Maine, built by a Burnham ancestor in Essex in 1845, which sailed until 1926. The Ardelle is constructed mostly of white oak, locust, and white pine.

“I feel very grateful,’’ Burnham said. “We built this boat on a shoestring. We cut all the wood ourselves, built it out of stuff left over from other projects - things that people fished out of the trash and whatnot, with the help of numerous friends.

“There’s people that just feel tied to this. This is a traditional way to do it, friends helping friends. It’s been going on for 400 years, and the hope is that it will continue for a while,’’ he said.

The Ardelle is named for Burnham’s grandmother. Burnham’s teenage daughter, who helped christen the boat by busting a bottle of Spanish bubbly against the bow, is Perry Ardelle Burnham.

The volunteers included many locals from various maritime fields, as well as boat-building aficionados like Richard Sleeper, who grew up in Marblehead and who came from his home in Troy, N.Y., to do what he could to help in the last days of the project.

“I’ve never worked on one that’s totally traditional like Harold’s, so that’s what brings me here,’’ he said two days before the launch. “I think it’s pretty exciting that someone’s still doing plank-on-frame, trunnel-fastened shipbuilding.’’

What Burnham does “is significant in one way, in that he’s passing down a craft, the art and science of building large timber schooners,’’ said Barry O’Brien, a member of the museum’s board of directors. “He’s bringing history alive and he’s preserving history, not only through these schooners he’s built but by teaching others to build them as well.

“He’s the real thing. He’s the classic new England Yankee: He’s independent, he’s determined, and he works around all the challenges that come up in boatbuilding,’’ O’Brien continued. “I’m as interested in the culture of what he’s doing as I am in the craft of what he’s doing.’’

Then there’s Zack Teal, 16, of Essex, who comes from a family of carpenters. He heard about the Ardelle from a cousin who worked on an earlier boat, came out one weekend, and soon made helping on the Ardelle into a for-credit internship through the Sparhawk School in Salisbury. He worked two days a week during the school year, then kept coming full time after school let out.

Last Saturday, once the Ardelle had stopped rocking in the water after launch and floated steady, a figure suddenly popped up in the bow. It was Zack, thrusting a triumphant fist in the air. Before the sledgehammers started knocking out blocks, Burnham had told him to get inside and ride it down the rails.

“Zack has showed up on this job from day one and put his time in through winter in all weather,’’ Burnham said. “We’ve watched him grow at least 3 inches over the year. When he started, we had to tell him a few things and really work with him, but by the end of the job I could ask him for what I wanted and he would do it. No one deserved it more than him.’’

Maybe the industry has a future after all.