A love of learning

At a new independent school in Melrose, kids respond to emphasis on collaboration 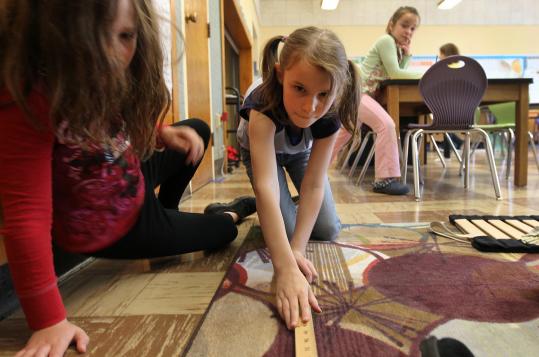 Janice Tabin (above, from left), Greta Risgin, and Lydia Mroz work on a scale drawing of their grade 2-to-4 classroom at Anova School in Melrose. (Pat Greenhouse/ Globe Staff)
By Kathy Shiels Tully Globe Correspondent / June 9, 2011

MELROSE — The security doorbell outside Anova, the Massachusetts School for Science, Creativity, and Leadership, is buzzing incessantly. “What is all that bell-ringing?’’ new teacher Christine Horan asks, excusing herself to find out. Mid-school year, Horan transferred from a private school in Virginia for the opportunity to teach at one of the state’s newest independent schools.

“Let us in! Let us in!’’ As Horan opens the door, 30 students run past her, shouting and laughing, back to their classrooms.

Kindergarten through sixth-grade children begging to get back into school? After recess, no less? And on one of spring’s first warm, sunny days? An uncommon scene at most schools. At Anova, it’s typical. What’s striking is the children’s excitement: It’s genuine and palpable.

Courtney Dickinson (“Ms. Courtney’’), Anova’s uber-energetic founder and codirector, is not surprised. The youthful dynamo behind one of the state’s most innovative schools embodies the energy of Robin Williams, the Bunny, and Alvin the Chipmunk — on caffeine.

“What’s most exciting and meaningful about all this is to walk into classrooms and see children being inquisitive,’’ Dickinson says. “It’s so exciting and compelling for me. Kids really engage; they don’t have a ceiling on their learning.’’

But they do have walls to display example of that learning. Resembling many families’ home refrigerators, the wall décor is students’ hand-painted pictures, science projects, and poems. Codirector Heather McAvoy points out the lesson behind the wall coverings. There’s a five-step engineering model for continuous improvement (“Ask, Imagine, Plan, Create, Improve’’); a science project on cells displays results of children’s own interpretations: a diagram, an essay, even a comic strip. “We like to give children choices,’’ McAvoy says.

The other wall, covered with haiku on loose-leaf paper, shows results of Horan leading a 20-minute, write-all-you-can poetry frenzy. Second- to fourth-grade students worked in pairs or trios. Life skills, such as collaboration and leadership, McAvoy notes, are just as important as math, reading, and science.

The classrooms are designed to foster collaboration. Instead of tightly crammed row upon row of desks and chairs with the teacher’s desk up front, three or four small tables with chairs tucked underneath are purposely spaced out around the classroom. Like miniature professionals, students confer and debate at the tables, some standing, some leaning. Sometimes they sit.

Teachers are not boxed in between a large desk and the blackboard. They stand. Walk around. Ask questions.

Facilitative learning, not repetition or following a curriculum script, is the mandate.

At Anova, there’s also room for mistakes. Anova’s emphasis is not perfection. Proudly applauded on the hallway walls are the K-2 grade students’ haiku. Uncorrected, misspelled words and phrases describe a pencil: “us fell piece of wood,’’ “writing imploment.’’

Annual tuition is $12,500, plus a required Apple laptop. “It’s not about ‘facts in the head,’ ’’ Horan says, “but do they know where to access information.’’ Last year, to ensure the school readiness for its September launch, Dickinson required parents to contribute their time. Clearly vested in the school’s success, they did — about 1,100 hours — painting walls, building a website.

With its lease at Melrose’s former Beebe school ending, Anova will be moving to space on two floors within the First United Methodist Church of Melrose on Main Street. “We are thrilled to be staying in this community,’’ says Dickinson.

Besides changing location, Anova plans to expand through the eighth grade, and hire more teachers to the current pool of seven full- and part-timers. Dickinson remains calmly confident. “We’ll be figuring it out along the way, she says. “Making things perfect is the enemy of getting things done.’’

Anova is not for everyone. Of the initial 37 who enrolled, seven left. “We’re about progressive education,’’ Dickinson explains. “Some parents really want a structured approach. We don’t believe that’s important.’’

Nor homework. Anova’s “no busywork’’ philosophy concerns some parents; their kids, not surprisingly, not so much. Medford resident Melissa Ress says Jasmine, her fifth-grade daughter, “has had an absolute blast’’ at Anova, and plans to return next year. But Ress voices concerns, as her daughter and older students move forward, that they learn the discipline that homework teaches, such as study skills and time management, which she believes they need to be successful.

There’s also the limitations of being a small start-up. “We recognize we won’t always have the resources a larger school can offer,’’ says Laura Wattenberg, referencing arts and sports. But for the Winchester resident and parent of a fifth-grade daughter, “Anova fills a niche, a niche that needs filling.’’

For some children, the biggest challenge isn’t a lack of homework or after-school activities, but friendships. “We construct classroom communities and did pretty well,’’ Dickinson says, “but some kids didn’t land with a friend.’’ In a more typical school with more children, she points out, there’s a higher chance for finding friends.

How does Dickinson measure success? Is the child engaged and happy? She illustrates, telling of one boy, who like many Anova students, was “really disengaged’’ in his previous school.

Shortly after being at Anova, the boy’s mother saw a difference. “My son is back,’’ she told Dickinson. “I haven’t seen my son in a while.’’ But now there’s a new problem. When the school day ends at 2:45 p.m., the child doesn’t want to leave.

To learn more about Anova, go to www.anovaschool.org.