Open Meeting Law puts reins on gadget use at meetings 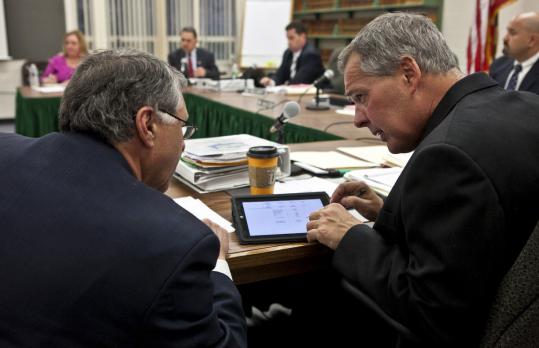 In North Reading, finance director Joe Tassone (left) and Town Administrator Greg Balukonis use an iPad during a selectmen’s meeting. (Photos By Aram Boghosian for The Boston Globe)
By Kathy McCabe Globe Staff / May 19, 2011

As the North Reading town budget was beamed onto a screen for the public to view, the Board of Selectmen tapped on iPads to read pie charts and graphs, tax revenues, and spending projections.

The board started using the computer tablets in February to save on time and paper costs. “It becomes extremely time-consuming to put agenda packets together,’’ said Town Administrator Greg Balukonis. “We’ve seen our packets grow in the last five years. This is simply replacing the paper package.’’

Laptops, iPads, cellphones, and other high-tech gadgets have ushered in the “e-gov’’ era. Bulky paper packets filled with meeting agendas, notices, and other communications have been replaced by digital downloads in at least two communities. North Reading used a state grant to purchase iPads for the selectmen and planning commission.

Somerville two years ago invested in desktop computers for use by its Board of Aldermen. The meeting agenda already is on the screen, along with links to committee reports, at the start of each meeting.

“I find it incredibly useful,’’ said board president Rebekah L. Gewirtz, noting the board streams its meetings live on the city’s website, for residents to watch at home. “It allows us to be efficient and environmentally friendly. We use less paper.’’

Yet “e-gov’’ also poses a risk to the state’s Open Meeting Law. The law requires government bodies to conduct business in public. Agendas, minutes, and other materials submitted to the board are considered a public record. But e-mail and texting features on phones and computers make it possible to circumvent the law. Officials could conduct private conversations, among themselves or with others, while convened in a public meeting.

In Saugus, complaints of Town Meeting members sending text messages to each other led to a ban on the use of cellphones by members during a session. “I had gotten a couple of complaints from members who thought members were texting each other to coordinate their appearances at the podium,’’ said Town Moderator Robert Long. “That to me was not right. My chief concern was that they could be holding a meeting within the meeting.’’

The Open Meeting Law does not prohibit the use of electronics by government bodies. But it does define deliberation as “. . . any oral or written communication through any medium, including electronic mail, between or among a quorum of a public body on any public business.’’

A spokesman for state Attorney General Martha Coakley, whose office enforces the law, said each board should decide how it manages electronic communication. “Whether it can or cannot be used is at the discretion of a board, or its chairman,’’ spokesman Harry Pierre said.

One specialist in electronic government said e-mails and texts during public meetings might not be a smart policy.

“The Internet allows access to look up information instantly. That’s a positive,’’ said Michael Ahn, assistant professor of public policy at the University of Massachusetts Boston. “But it does put a lot of burden on the elected official, or administrators, to make sure they follow’’ the Open Meeting Law.

The Medford City Council last month voted against a proposed ban on electronics during its meetings. Councilor Robert Penta proposed the measure after Councilor Paul Camuso came to a meeting with a laptop one night. “You should not be coming into a public meeting, communicating with private people or private interests,’’ Penta said.

A sign outside the Medford council chamber states that people should turn off cellphones and pagers during meetings. It does not mention computers. But the sign does not apply to councilors, many of whom leave their desks to make or receive phone calls.

“That sign applies to everyone,’’ Penta stated. “Why are we different than the taxpayers?’’

Camuso countered that his laptop allows him to better serve Medford taxpayers. “I want to be able to give taxpayers timely information,’’ Camuso said.

He said he only uses electronics to look up public information, not to communicate with members. After using a laptop for two meetings, Camuso switched to his iPod Touch, and later purchased an iPad that he recently used to look up information on a city code during a meeting.

“We’re in the information age,’’ he said. “I want to be able to provide people with accurate, timely information.’’

In Revere, the City Council voted against a ban on electronics last year. The measure was proposed after Councilor at Large George Rotondo started using his laptop during meetings. He continues to be the only member of the 11-member board who logs on during meetings. “People who watch the meetings on [local cable] know me on the street as the councilor with the laptop,’’ Rotondo said.

He said he recently logged onto maps to check on the number of parking spaces at a gas station, whose owner had applied to the council for permission to add a convenience store. “He said he had nine parking spots, but I was able to physically look at the parking lot and say, ‘You only have seven,’ ’’ Rotondo said.

Still, municipal lawyers said public officials should show restraint when logged onto a computer during a meeting.

“It’s fine to look up information,’’ said Mark Rumley, Medford city solicitor. “But when you get into sending e-mails, that’s different. If you discuss municipal business in an e-mail, then that becomes a public record.’’

John Vasapolli, the Saugus town counsel, advises against town officials using electronics during public meetings. “They shouldn’t have a laptop or a cellphone. They could be deliberating outside the meeting, which is a clear violation of the Open Meeting Law.’’

In Somerville, Gewirtz agreed that the use of computers for anything other than accessing information could be problematic. “You certainly want to make sure that you use it to help make a decision, not abuse the law,’’ she said.

When using their iPads, North Reading selectmen must follow the town’s information technology policy. That limits the personal use of municipal computers.

“It’s not to be used to communicate during the meeting with one another,’’ said Robert Mauceri, the board’s chairman. “We see this as an ideal, and not too expensive way, of eliminating paper, and providing more access to information.’’

It’s too soon to say how much the town has saved on paper costs. Printed copies of materials are available to the public at Town Hall, officials said.

The switch from photocopier to iPad isn’t entirely completed. Since preparation for this year’s budget began well before February, selectmen received budget materials in a thick binder. Only a PowerPoint presentation was loaded onto iPads.

“This is the last year the budget book will be printed,’’ said Selectman Mauceri. “Next year, everything will be on the iPad.’’

The state’s Open Meeting Law does not specify how public officials should use electronic devices during a public meeting. But the law does reference electronic communication, as it pertains to deliberations by officials.

The law states: “The Open Meeting Law defines deliberation as an oral or written communication through any medium, including electronic mail, between or among a quorum of a public body on any public business within its jurisdiction.’’

“E-mail exchanges between or among a quorum of members of a public body discussing matters within the body’s jurisdiction may constitute deliberation, even where the sender of the e-mail does not ask for a response from the recipients.’’