Back to the garden

At ‘victory’ plots, community spirit means as much as harvest 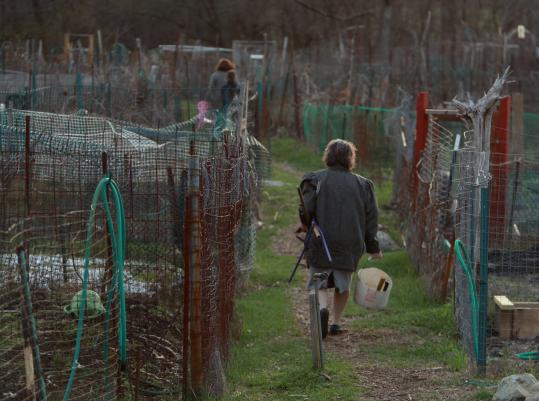 BELMONT — A set of gardens that began as a wartime effort to live off the land has become — a half-century later — a celebration of community connections and local growing and eating.

With about 150 plots, and nearly as many aspiring gardeners on the waiting list, the Belmont Victory Gardens have become one of the area’s more popular community gardens.

In a 21st-century twist, several gardeners get their hands dirty during the day and blog about it at night. They contribute to a Facebook fan page and chat group, making the gardens a virtual destination as well as a physical one.

There is no residency requirement. About 60 percent of the gardeners are from Belmont, but the prospect of a plot for $40 per season draws the green-thumbed from Arlington, Medford, Newton, Waltham, and Watertown, and even far-flung places like Dracut, Hingham, and Tyngsborough, said Mary Trudeau, Belmont’s conservation agent.

The total area is only about 3 acres, set in a small valley that is part of the 70-acre Rock Meadow Conservation Area off Mill Street, but to gardeners like Judy Otto, having space there is a small slice of happiness.

She got her 15-by-8 plot last season, and is still clearing away tree stumps and boulders typical of the region’s rich, rocky terrain. She intents to cultivate a butterfly garden again this summer.

Gardening is “my path back to life,’’ said Otto, 68, who had a battle with cancer that included weeks of radiation and chemotherapy 11 years ago.

A former executive coach and management consultant, Otto said she was long interested in gardening and the environment, but had little free time. After she became sick, sustainable living became a passion.

She joined a local environmental group, Sustainable Belmont, and signed up for a plot in the community garden.

“I realized my obit might say, ‘She never did any volunteer work,’ ’’ quipped Otto, who was working her garden one recent afternoon.

Victory gardens were promoted during World War II as efforts to make up for rationing and encourage local patriotism. They saw a reinvigoration in the late 1960s and early 1970s, when the “back to the land’’ movement was popular and the country was grappling with fuel shortages.

Now they are again popular, although 21st-century victory gardeners are more likely to cite an interest in locally grown food and community life than international politics as a motivation.

“It is something that exemplifies the community spirit. Opening day is where the friendships start, new gardeners feel comfortable asking questions of those who have been there a while, and people really do help each other out,’’ said Margaret Demille, who posts items about her Belmont plot online at www.gardenmisadventures.blogspot.com. “There is a lot of goodwill, in a non-Pollyanna way.’’

Belmont’s gardens — first established near the town center during World War II — were moved to Rock Meadow in 1969, shortly after the town acquired the conservation land from McLean Hospital.

The popularity of community gardens diminished in the 1980s, when “career-building replaced gardening,’’ and many plots were abandoned, according to a history written by Victoria Thatcher for the town’s Conservation Commission.

About seven years ago, there was a resurgence of interest in the Rock Meadow garden plots. Friends of Rock Meadow was formed, and $75,000 was raised in grants to prevent reforestation of the area and create a long-term management plan. By 2007, all of the plots — which vary widely in size and shape — had owners, and the waiting list began to swell.

The community garden’s work day on April 9 attracted more than 120 volunteers who cleared brush and ubiquitous invasive plants like bittersweet vines, as well as native raspberries and poison ivy, and established a new compost area.

Fewer than a dozen plots become available each year. Belmont resident Jingtbo Cai, 40, was out earlier this month scouting one space recently offered to her parents. Her parents, who are from China and are in their 70s, hope to grow squash and other vegetables, Cai said.

Even the prospect of clearing a rocky, overgrown patch is not a deterrent for her family, Cai said.

A few rows down, Italian-born Gino Volpe, 90, of Arlington, has been growing garlic, tomatoes, onions, and celery here for more than 20 years.

His home doesn’t have the yard space for a proper garden, Volpe said, and he enjoys the “nice people’’ in Belmont. He can’t point to a favorite part of the season. “Starting, harvesting, weather . . . it’s all important,’’ he said. He is even patient with the resident woodchucks, which torment most of his fellow gardeners. “The woodchucks were here before us,’’ he said.

Perhaps the area’s best-known communal property is the Fenway Victory Gardens, 500 plots on 7 acres in the heart of Boston. They were established in 1942, when even parts of the Boston Common and Public Garden were allocated for citizen garden.

Smaller community gardens have thrived for decades all over Boston, Cambridge, and Somerville, where personal yard space can be scarce at best. But even in the more spacious suburbs, gardeners crave togetherness, accounting for the sustained popularity of the gardens in Belmont as well as neighboring Waltham, said local organizers.

Waltham’s community gardens, called GROW for Green Rows of Waltham, were founded 18 years ago, and consist of 152 plots on 2 acres of University of Massachusetts Field Station property on Beaver Street.

In the past three years, the waiting list there has grown to more than 50 people, with just 10 to 15 plots turning over every year, said organizer Marc Rudnick. Community gardening efforts have also taken root in Brookline and Ashland in recent years.

Many Belmont plots have benches, statues, or other personal touches. Some grow only flowers, some are devoted to kitchen herbs. A few have grapevines. Two seasons ago, members of the Belmont High School girls’ track team would run over together after school, and cultivated award-winning pumpkins.

Kathy Martin, who has been gardening here and at her home nearby for 20 years, has a pear tree she transplanted two years ago. She hopes it will finally bloom and bear fruit this season.

Her popular blog, “Skippy’s Vegetable Garden’’ (www.carletongarden.blogspot.com, named after her faithful Portuguese water dog who can be somewhat territorial about the plot), gets about 2,000 visitors daily, said Martin, who is a biochemist.

Gardening is a hobby and passion, she said. She tries to grow all her family’s vegetables, and digging into the earth is a welcome break from “staring at numbers on the computer.’’

Demille, too, uses her garden as a break after working as a science writer in Needham. She got the Belmont plot four years ago, after growing tired of container gardening on an apartment porch.

This year, she plans a combination of good-smelling perennials — wormwood and rue — and a riot of kitchen herbs, such as sage, rosemary, thyme, and basil. There will also be “the usual suspects,’’ tomatoes, cucumbers, squash, zucchini, peppers, and few new types of beans and Asian eggplant, she said.

Demille said she enjoys the many dinner invitations that flow in when one shows up with armfuls of fresh herbs.

But she’s been known to stand in her plot and nibble directly from the source. The muscle aches and scratched knuckles that follow a vigorous gardening session are all worth it.

“Fresh stuff just tastes better. It’s worth all the trouble,’’ she said.