Coastal residents shore up vs. nature

Homeowners fight for what they love 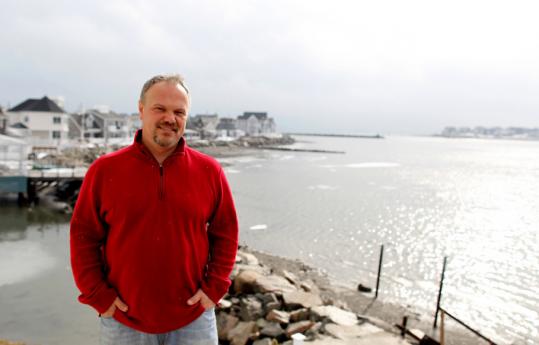 Bill Hoover says the risks of living on the ocean are balanced by the beauty. (Jonathan Wiggs/Globe Staff)
By Johanna Seltz Globe Correspondent / April 3, 2011

SCITUATE — The view from Bill Hoover’s house on Cedar Point is so spectacular that some days it’s hard for him to leave and go to work. Other days, he can’t get to work no matter how hard he tries.

That’s because when a nor’easter hits, the waters breach the riprap behind his home and the sea wall across the street and “you’re stuck,’’ Hoover said.

“The peninsula floods. There’s no electricity and no hot water. Huge rocks the size of basketballs get tossed into houses. It’s dangerous to drive or walk, and you can’t get out,’’ he said.

On balance, Hoover puts up with the inconvenience, and even danger, of living on the edge of the water for the beauty and joy of it.

“On a nice day, I can see the entire harbor, straight across to First Cliff and the old Coast Guard station. I can see Minot’s [Ledge] Lighthouse. It’s pretty much views 365 degrees around of the ocean — not a bad spot,’’ he said. “God, yes, that makes it worth it.’’

Hoover, an internist who teaches and writes medical textbooks, and his wife, Laura, a hospital emergency room nurse, moved to Cedar Point from Youngstown, Ohio, about 10 years ago. They had never lived on the water before. They quickly became fans.

“If you like the outdoors, like to jog, ride bikes, boat — you step outside and you’re there,’’ Hoover said. “The sights are beautiful, the air’s fresh, there’s plenty of little niches you can get lost in . . . and it doesn’t cost you anything. You don’t have to vacation anywhere.

“I love the tranquility,’’ he added. “You get out here and nobody else is around. You can get into Boston pretty easily, but it feels like you’re a million miles away from anything.’’

The Hoovers’ tiny house is about as close to living on the water as you can get, without leaving shore. It sits at the beginning of Cedar Point, which forms one arm of Scituate Harbor. One side of the house faces the harbor; across the narrow road, just yards away, is the Atlantic Ocean.

Since they moved to Scituate, the Hoovers have had three children — Charlotte is 4, Gerhardt, 2, and Annabelle, 1. Bill Hoover said: “It’s just a wonderful place to raise a family. The kids have access to kayaking, swimming, boating, as soon as you walk out your door. They dig for clams.’’

The family has a 30-foot pleasure boat with a cabin and they often take off for quick trips to Martha’s Vineyard, he said.

“Everyone who lives here year-round sort of looks out for each other, and for the summer people,’’ he said. “Whenever there are storms, we all check each other’s houses, make sure they’re buttoned down.

“The ones who don’t live here year-round, we’ll call and tell them if it was bad, or wasn’t as bad as expected,’’ he said.

One requirement of living so close to the water is keeping a close eye on the weather, Hoover said. When it became clear that the storm moving toward the area this past Christmas was a bad one, Hoover’s wife and children left for Ohio.

He stayed behind to try to keep the pipes from freezing, as they had in a winter storm in 2003. He also wanted to protect the house from any looters, who sometimes walk off with items from empty houses after storms, he said.

“My wife has been here for one of the previously bad storms and just wanted no part of it,’’ he said. “They got out of Dodge.’’

It was a good call, he said. The storm was the worst he’d ever seen, and old-timers told him it was the worst since the destructive Blizzard of 1978.

Four hundred homes were damaged and the town faces $165,000 in bills associated with the storm, as well as $1 million to repair a breached sea wall. The federal government recently decided not to help pay for the expenses, so Town Meeting will decide this month whether to spend $175,000 for work around Scituate Light and $500,000 for a sea-wall repair fund.

“I never had water damage until this last storm,’’ Hoover said. “It used to be the sea wall was high enough it would protect the houses. This time the waves were so high, and the wall seemed lower, that the waves were hitting onto the deck and sliding onto the house.

“The problem is, all the jetties and sea walls the Army Corps of Engineers built have been slowly settling,’’ he said.

Hoover said he spent about $20,000 repairing damage from the storm — replacing windows, French doors, and shingles, which “peeled off like Chiclets’’ in the wind. He didn’t place an insurance claim because he worried his premiums would go up.

“If you make a claim, it better be a really good one,’’ he said. “So you save it for the really catastrophic hit.’’

Despite the knowledge that such a hit is possible when living on the edge of the sea wall, Hoover said he has no regrets.

Globe North
Globe South
Your comment is subject to the rules of our Posting Policy
This comment may appear on your public profile. Public Profile FAQ