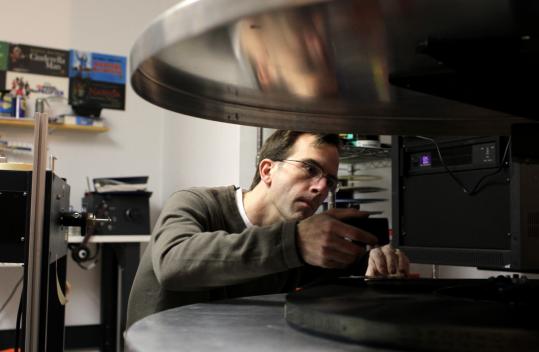 SCITUATE — Bret and Michelle Hardy are bucking the trend toward megaplex cinemas by launching a new company to run the two-screen Cameo Theaters in Weymouth and Mill Wharf Cinemas in downtown Scituate.

“As a mom-and-pop business, we have less overhead than a larger chain,’’ Michelle Hardy said recently. “And it’s OK if we’re not super-successful. We try to look at it as a hobby. We’re really doing it out of a love of movies, and hoping it can be worth our time.’’

The Hardys’ new company — South Shore Cinemas — stepped in on Jan. 1 when Patriot Cinemas decided against renewing its lease for the Scituate and Weymouth locations. The new operator has a short-term lease for both sites “with options to continue if we can make the theaters profitable,’’ Bret Hardy said.

“I hated the idea of those two locations being closed,’’ he said. “I had so much history with both places.’’

He remembers going to the Cameo as a child in Weymouth, and later to the old Scituate Playhouse when his family moved to Marshfield. He managed the Cameo while in college and continued to work part-time for Patriot Cinemas until his first child was born, 15 years ago. He and his wife met as teenagers when he was an usher at Patriot Cinemas’ Pembroke theater, which is now a paint store.

He was so taken with the movie business that he quit his job in marketing to run the old Scituate Playhouse for two years, before it was razed in 2003 and replaced by condominiums and the smaller Mill Wharf theater.

So when David Scott of Patriot Cinemas told him the company wanted to get out of Scituate and Weymouth for economic reasons, Hardy said he “had to try again’’ — although this time he’s keeping his day job as marketing manager for an engineering and manufacturing company, and letting his wife run the daily operation of the theaters. He and his 15-year-old son help out on weekends and evenings.

“I like the challenge of trying to revive a struggling enterprise,’’ Hardy said. “I believe that if I can’t make the theaters profitable, then it will be very difficult for anyone to make them profitable. I’m willing to contribute on any level, from sweeping the floors to splicing film. I think that mindset is critical for success in this particular situation.’’

Plus, he “just likes being in movie theaters. Usually people are happy when they’re out to see a movie,’’ he said.

Scott said he’s happy the Scituate and Weymouth theaters will stay open. “It wasn’t an easy decision not to negotiate a new lease,’’ he said. “You don’t want the theaters to close. The Cameo, especially, was very bittersweet. We’ve been there since 1974.’’

He said it was a relief when Bret Hardy made his deal, calling Hardy “more hands-on, a better fit’’ for the small venues.

“All across the country, twins and single theaters are closing,’’ Scott said. “It’s just the economics of the business.’’

According to the latest industry statistics, almost half of the cinema screens in the country are in multiplexes with eight to 15 screens. The biggest growth during the past two years is in megaplexes — theaters with 16 screens or more.

And the number of small movie houses has fallen dramatically, statistics show. Just a smattering remain south of Boston, including the Dedham Community Theater and single-screen Loring Hall in Hingham Square. A group of movie and theater buffs in Stoughton, meanwhile, is hoping to restore and reopen the old State Theater, built in 1927 as a movie house and vaudeville stage but last operating as the Stoughton Cinema Pub until it closed in December 2007. (See accompanying story at right.)

Scott said Patriot Cinemas — which operates multiplexes in Hanover, the Hingham Shipyard, and Portland, Maine — intends to keep running Loring Hall. Built in 1852, the historic building has been owned and operated as a cinema by the Scott family business since 1964.

Michelle Hardy, a writer who minored in film in college, said the Cameo and Mill Wharf are special because they can offer a more personal experience than the larger chains.

“You won’t get a 3D digital experience [at the Cameo], but you’re going to get a friendly staff and a cheap price,’’ she said. “Matinees are $4, so you can take your whole family out for $20 or less.’’

Plus, she said, the old building is charming, with raised paneling and a [non-working] fireplace in the lobby — and spruced up with some plastering, painting, and lots of cleaning. It seats 246 in each of its theaters, and, if enough money comes in, she hopes to replace some of the chairs, she said.

At Mill Wharf, which has a 68-seat and 163-seat auditorium, there’s new equipment so patrons can rent an auditorium and show their own movies. The Hardys, who live in Hanover, also plan to bring in more critically acclaimed movies, and those with local ties.

“It won’t be an art house,’’ Michelle Hardy said. “We’re definitely not going that far. We’re looking at movies we want to see, basing it on our personal preferences.’’

Because the theaters only have two screens, she said, “we have to be choosier. If we have a kid movie, we have to pair it with an adult movie at night.’’ As a small company, “sometimes we have to wait a little longer [to get movies]. We’re hoping our patrons will wait.’’

The movie schedules are available at www.sscinemas.com.

“What I want people to know is we’re doing this because we want to keep the tradition of these local small-town cinemas alive,’’ she said. “In order for these theaters to survive, we really need people to support us — so please come.’’