A spelling whiz is D.C.-bound 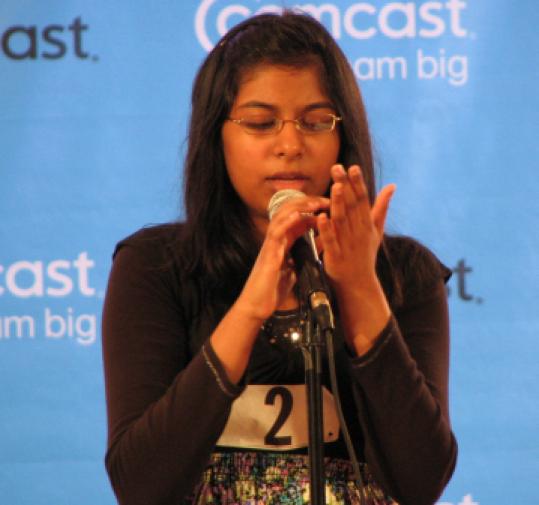 RANDOLPH — A sixth-grader from Franklin has won a spot in the Scripps National Spelling Bee to be held in June in Washington, D.C.

On Saturday, Surabhi Iyer bested 22 other youngsters at the South Shore Regional Spelling Bee in Randolph by correctly spelling “ionize’’ in the 25th round. Matthew Donohue, a sixth-grader from Kingston, took second place, and eighth-grader Katharina Brown of Quincy took third.

At age 11, Iyer is a poised and experienced competitor, most recently winning on the TV game show “Jeopardy’’ during kids week last summer. Her winnings included $23,000 and a 10-day cruise to the Arctic with her family. “It was fun going to Hollywood,’’ where the show is filmed, said Iyer, “but the Arctic cruise was really cool.’’

To help her visualize the words during competition, Iyer uses her fingers to write the letters on her palm. Younger sister Shraddha, 9, is also a good speller, taking second place at their school’s qualifying contest last month.

Iyer said she hopes to be a writer and neuroscientist when she grows up.

Donohue, 11, who attends Kingston Intermediate School, said he was “really incredible happy’’ with winning second place. In the later rounds, many of the words were from foreign languages, and “I was dumbfounded, and was maybe guessing wildly,’’ said Donohue. “Surabhi is a great speller and deserves to win. I’m really happy with what I have.’’

His mother, Renee, said her son has a wonderful memory and loves to read. “He was reading before age 3,’’ she said.

The regional bee, held at Lombardo’s in Randolph, is sponsored by . Footage of the competition will be available later this month in the “Get Local’’ section of the On Demand menu for Comcast digital cable customers.

Wendy Chow can be reached at wchow@globe.com.