In Plymouth, cutting through a channel, and paperwork 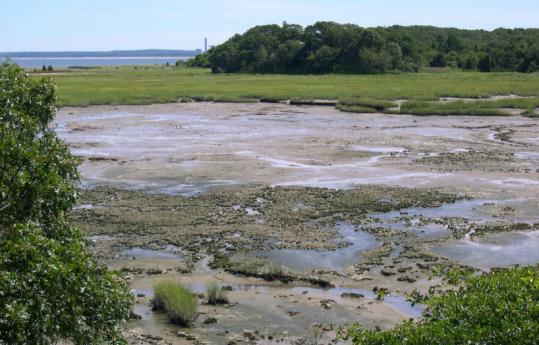 Twenty years after the No-Name storm closed a Plymouth marsh used by fishermen since the 17th century, a group of volunteers has succeeded in reopening an inlet to the sea to keep the marsh alive. The victory came after a hard battle — not against the elements but against regulators who wanted to let nature take its course.

The course that nature was taking since storms closed the Ellisville Marsh was turning a once-vibrant ecosystem into a mud flat, according to members of the volunteer group Friends of Ellisville Marsh. And environmental regulators in the state’s Coastal Zone Management office thought that was all right, they say.

The Friends spent three years and raised $85,000 to reopen the marsh’s historic channel to the sea, allowing water to flow into and out of the marsh with the tides. With the permits finally in hand, dredging was completed recently. As seawater surged in, dead marsh grass floated out, water scoured the marsh bottom, and gulls gathered to see if fish might be on the menu again.

Draining the marsh at low tide is essential to allow the primary vegetation — a marsh grass called spartina alterniflora — to survive, said Friends president Eric Cody. Without regular tidal alternations, the marsh grass was “drowning,’’ with fatal consequences for the whole ecosystem, he said.

But three-quarters of the money raised by the Friends was spent not on the physical work of dredging the marsh’s inlet channel but on fulfilling the requirements of the state’s permitting process.

“All we wanted to do was to protect fisheries and wildlife, and it’s mind-boggling what they made us go through,’’ Cody said.

Environmental regulatory requirements were contained in an official notice issued by the Executive Office of Energy and Environmental Affairs at the start of the project in 2008. To protect endangered species and habitats — including fisheries and shellfish, least tern and piping plover populations, surf clam habitat, and eelgrass beds — the project had to meet permitting requirements for the relevant agencies, including by the state Department of Environmental Protection, the Natural Heritage and Endangered Species Program, Department of Marine Fisheries, Office of Coastal Zone Management, and others. That meant the Friends were required to conduct surveys documenting pre-existing conditions of birds, fish, shellfish, eelgrass, water quality, and sand sediment size, among other requirements.

The 71-acre Ellisville Salt Marsh is located on the South Plymouth shoreline 5 miles north of the Cape Cod Canal. It’s been a center of fishing, shellfishing, and agricultural activity for more than 300 years. Thoreau visited it 150 years ago and commented on its abundant herring. Until 1987, local lobstermen kept the channel open for bait fish and access to the harbor.

But after the state acquired part of the marsh, regulations designed to protect the coastline prevented dredging. A decade after the No-Name winter storm of 1991 closed the channel, an abutter received an emergency permit to reopen part of the channel to help save a sand cliff from eroding under his house. But a winter storm in 2005 closed it again.

The salt marsh began to die, said Bob Goldthwaite, who has lived near the marsh for decades. “It became mud flats,’’ Goldthwaite said. “It smelled like hell.’’

That’s when the Friends of Ellisville Marsh was formed to reopen the marsh’s inlet channel, maintain it, and keep the marsh alive. But the group discovered that top state environmental regulators opposed that goal, with the view that coastal environments were best protected by not interfering with natural forces.

“We met resistance right off the bat,’’ Goldthwaite said.

But state officials said demanding surveys and other regulatory requirements exist to protect a vulnerable piece of coastal environment and state-listed species. Pointing to the state’s official notice on the project, Energy and Environmental Affairs spokeswoman Catherine Williams said: “This basically outlined what was coming next for the project when the plan was certified.’’

To protect eelgrass, for example, the Department of Marine Fisheries required the Friends to conduct before-and-after excavation surveys and monitoring of the eelgrass beds. These surveys are still going on to make sure eelgrass beds do not suffer.

When the Friends tried to obtain necessary permits from the Department of Environmental Protection, the Plymouth Conservation Commission, the US Army Corps of Engineers, and the Office of Coastal Zone Management to dredge the marsh’s channel, the group faced a daunting series of interagency meetings and a long list of required environmental studies that required professional “engineer-stamped’’ work.

No “lay person’’ could meet these requirements without costly help, said Cody. “You need consultants, environmental engineers, people who can use the right words.’’

The regulatory process was burdensome and confusing, Cody said. “Sometimes we were told things that contradicted other things we were told by someone else sitting in the same room.’’

And some requirements defied common sense, he said. One permit required the analysis of sand 50 yards away from the channel to see if it was compatible in size with the channel sand. To get sediment samples they had to bring in a backhoe, at a cost of $1,500, to dig up sediment and then ship it to a lab.

State officials, however, said coastal ecosystems such as salt marshes need the level of regulatory attention the Friends faced.

“Areas of Critical Environmental Concern are sensitive ecosystems containing high-value natural resources such as shellfish, eelgrass beds, and endangered species important for commercial and recreational fisheries, natural erosion buffers, and ecological diversity,’’ wrote Bruce Carlisle, acting director of the Office of Coastal Zone Management, in an e-mail last month. “The permitting required by state and federal agencies ensures that projects do not adversely’’ affect these resources.

Doctoral student Ellen Russell, who gathered water samples for the Friends to meet permitting requirements, said the permitting process appeared routine. “I come from an environmental consulting background. These sorts of back-and-forths were very standard,’’ she said.

But Goldthwaite said he thought the process reflects the absolutist thinking that sees nature as wilderness and ignores the fact that people and nature have been interacting along the coast for centuries. At one meeting, he said, the Friends protested “If we do nothing, the marsh will be nothing but a stinking mud flat.’’ The response, Goldthwaite said, was “Well, a stinking mud flat has environmental value, too.’’

Spending three times as much money on permitting as on actual restoration work “makes no sense,’’ Cody said.

Relying on perseverance, a little help from local legislators, and persistent fund-raising, the Friends won a “precedent-setting’’ permit that includes the right to maintain the channel if storms fill it again, he said.

The Friends say they are also proud they achieved a public good entirely with private resources.

“Not a penny of taxpayers’ money’’ was spent, Cody said.