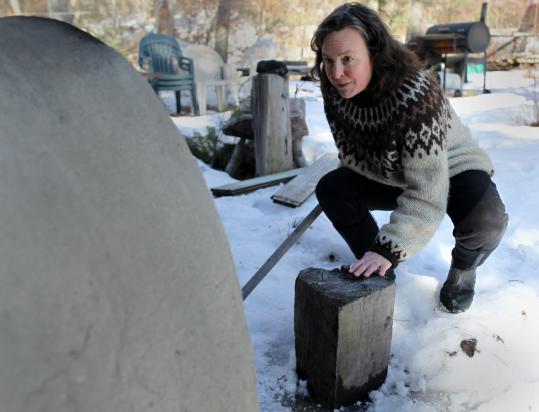 PLYMOUTH — Paula Marcoux admits to a slight obsession with building mud ovens — which could explain why she has three in her backyard and one hollowed out of a bank on a nearby road.

She’s also built the wood-fired ovens — basically a stone cooking surface covered by a dome made of a mixture of clay, dirt, and dung — at Plimoth Plantation and Cohasset’s Holly Hill Farm.

“It’s so impossible to bake the best bread without it,’’ Marcoux said of the primitive appliance. “The bread is so astoundingly good, we’ve had people break down in tears. People will look at you and say, ‘I haven’t had bread like this since I was a boy in the Ukraine.’ ’’

An archeologist by training and baker by avocation, Marcoux said she’s not the only one obsessed with the ovens. In fact, a new commercial bakery in Plymouth — Hearth Wood Fired Bread — is turning out more than 2,000 loaves weekly from an industrial-sized, masonry version of the oven.

Marcoux said there’s more than simple flavor in the appeal of the ovens.

“I think a lot of people are very interested in just taking back some understanding of how things work,’’ she said. “It’s so simple and so there. Whether you’re making the dough, or making the oven, you feel so much more in control — not only of what you’re eating, but also how you live.

“I’m fairly resentful of modern life and consumerism, and this is part of the way of not participating in it,’’ she said.

Marcoux first learned about mud ovens when she was excavating them in Israel and Jordan in the 1980s. When she started working at Plimoth Plantation in 1987, she decided to build an oven there. The ovens only last about five years, so she replaced and repaired several over the years.

When she left Plimoth Plantation two years ago in an administration change, Marcoux threw herself into baking, and more oven making. The two activities are remarkably similar, she said. In one, you knead dough with your hands; in the other you mash clay, dirt, and dung with your feet.

“It’s such a tactile thing,’’ she said of building ovens. “People who are attracted to baking are into it.’’

Marcoux built the ovens in her yard as research for a paper she wrote for the Society of Post-Medieval Archaeology. The group was holding a conference in Newfoundland and the topic was how colonies became permanent.

“It was a really fun way to approach thinking about what it was like for people coming into a strange world, and how important it was to get food that seemed like home,’’ she said. “As part of the research, I dug an oven into a bank in the hillside down the road — and then we got a fire going and baked bread in it. It looked like [fantasy author] J.R.R. Tolkien’s Middle Earth,’’ she said.

Marcoux said similar ovens were found on the site of Colonial Jamestown in Virginia. The one she built is still visible from the road in Plymouth. “The archeologist in me wants to see how long it will last and how it will deteriorate,’’ she said.

She based another oven on a design popular in the early 17th century. The cloam, or Barnstable oven, was a small prefabricated clay oven that originated in North Devon, England, but traveled with colonists to Ireland, Newfoundland, Virginia, and Plymouth, she said. Marcoux built hers, with the help of a potter, in a brick nook of her yard and uses it to bake single loaves of bread.

A huge stone and clay oven — 6 feet across — is Marcoux’s version of something Samuel de Champlain might have built back in the 1600s when he was exploring the waters off Cape Cod. Champlain’s ship had gotten caught in the breakers off what’s now Chatham and put into the harbor, she said.

“They built a forge to repair the metal parts of their rudder and, amazingly to me, they built an oven to bake some bread,’’ she said.

Marcoux thought about what was available to Champlain — beach rocks, sand, and clay — and gathered similar materials from the beach in Plymouth to make a replica. “When it collapses it will look reasonably like what Champlain’s would have looked like,’’ she said.

Last summer, she worked with students at Holly Hill Farm in Cohasset to build a clay oven behind a barn, with rocks gathered from the fields for the base. The students helped mix the mortar with their feet, mashing together horse manure from the farm with local sand and Boston Harbor clay, which Marcoux got from a mason friend who had stockpiled it from the city’s Big Dig.

The farm used the oven a few times to make pizza and bread, before covering it with tarps for the winter, said its education director, Jon Belber. He plans to fire it up in the spring for communal bread baking and for visiting school groups.

Marcoux can’t wait for good weather so she can get back to cooking in her outdoor stoves in earnest. She starts with pizzas when the fire is at its hottest, moving to breads and other food as the temperature drops. “I’ve even used the very last dying heat to make meringues,’’ she said.

“It’s so frustrating to deal with a stupid metal box oven,’’ she said of the more conventional approach.

Last Thanksgiving, she used her cooking and research skills to produce an authentic 1845 holiday dinner for television — with the menu taken from E.A. Howland’s classic, “The New England Economical Housekeeper, and Family Receipt Book.’’ Marcoux wore a period costume to serve the finished dishes at the historic Hedge House in a filmed scene that aired on the History Channel as part of “The Real Story of Thanksgiving.’’

Other projects in the works for Marcoux include an encyclopedia entry of “all the food everyone was eating in the 17th century in North America, in 32 words’’ and a book of 19th-century recipes from the archives of the Plymouth Antiquarian Society.

Then there’s the sprawling history of “every animal people have roasted whole’’ that she’s writing for Bruce Frankel, a former top chef whose Shrewsbury company, SpitJack, specializes in open-fire cooking equipment, including smokers and whole animal rotisseries.

“Food is completely intermeshed with history, with the economy of the time and people’s lives,’’ Marcoux said, in explaining her burning interest in the subject. “It gives a window into a time. If the past is a foreign country, why not delve into it through its food?’’

And its ovens, she added.

Baking with a backyard oven

It takes a couple of hours to heat a clay oven, but times vary, depending on the size and condition of the oven, fuel, and weather. The wetter and colder the day, the longer it will take. Bigger ovens take longer to heat, but hold the heat longer, too.

When the oven is hot (700 to 900 degrees), push the fire to the side of the oven and sweep off a central spot for pizza, naan, or other flatbread. Cooking time is under a minute. Small chunks of hardwood can be tossed on the embers to keep the heat optimal.

Sweep out all the coals and ashes, wet a door-sized piece of wood till it’s soaked (to prevent it from burning and to add steam to the oven), and use it to close the oven for 30 to 40 minutes. Then your heat-loving breads can go in — ciabatta, baguettes, sour rye — anything that’s just flour and water and leavening. The temperature will fall from 500 or so to 400 while this load bakes.

After that, fruit pies and sweet breads like challah or pane dolce can go in.
Then as the temperature gets to 300 degrees and falling, you can put in a big pot of beans or some true pumpernickel overnight, or meringues or rusks.
Source: Paula Marcoux