Displays dish on the deep

Keeper of the Diving Locker tells of his underwater world 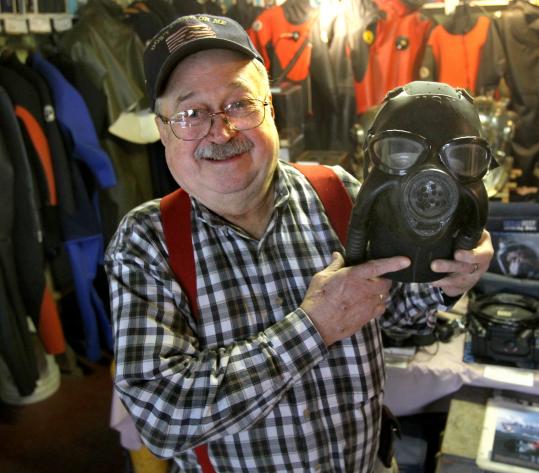 GLOUCESTER — A visit to the Diving Locker induces its own sort of rapture of the deep, with symptoms including giddiness and mild disorientation.

Visitors descend from the street to a low-ceilinged harborside basement, with two rooms smelling of rubber and old canvas and a hint of mildew. All around are diving suits and scuba tanks, helmets and masks, books and pictures. Here and there sit a shipwreck artifact such as a cannonball or a row of old bottles, rescued from the briny deep. Look up and there is a mannequin in a dry suit apparently swimming through the room, which seems perfectly fitting.

The basement is a small part of the Gloucester Maritime Heritage Center, an educational and tourist attraction at 23 Harbor Loop. But the Diving Center is really Paul Harling.

It’s his ever-growing collection of equipment and memorabilia, from light scuba tackle to heavy commercial diving helmets. Harling hand-writes the labels. He’s here all summer, greeting tourists six days a week. He’s here in the winter, too, welcoming a trickle of diving enthusiasts and cronies even though the Heritage Center is mostly closed.

The stories are all his. Harling has dived for lost dentures, and he’s been down to the wreck of the Andrea Doria. At 77, he’s dived as recently as 2009, right outside by the center’s Burnham Brothers Marine Railway, a facility for hauling boats out of the water for maintenance.

“We like to tell the story of the industrial waterfront and the history of the fishing industry, and certainly commercial diving was a part of all that,’’ said Harriet Webster, executive director of the Heritage Center. “One of the things we like to do as much as possible is to use people to tell stories, not just artifacts. Paul is a storyteller, and people enjoy that.’’

“This is the only display like it north of Florida,’’ said Harling, wearing red suspenders, a plaid shirt, and a “Don’t Tread On Me’’ baseball cap. “Much of it I had already acquired. It was just sitting in the house and nobody could see it. That’s why I figured this was a good place for it. And it was not available anywhere else. You might find a helmet hanging as a lamp outside a restaurant or something, but that was it.’’

Existing displays maintained on naval bases have been largely closed to the public in recent years due to security concerns, he said.

Harling grew up in Arlington, but spent lots of time at a family place in the Riverdale section of Gloucester. He married a Gloucester girl, taught elementary and middle school in the city for 33 years, and still lives in Gloucester. Retired and “at loose ends’’ since his wife’s death in 1999, he said, he made the Diving Locker his mission. He opened it in 2000, and he’s been there ever since, helped out by diver friends like Jack Munro of Beverly and Anthony Pettiglio of Woburn.

Harling can’t quite explain why he has been fascinated with diving since he was a child.

“My dad had a book, ‘On the Bottom,’ by Edward Ellsberg. It was part of a set, and I never looked at any of the rest of them, I couldn’t tell you what they were. I found that book and I absorbed it and adopted it,’’ he said. “The book was about the salvage of the submarine S-51 that was rammed [accidentally] and sank off Block Island.’’

He was hooked, especially after the publication of another underwater classic, Jacques Cousteau’s “The Silent World.’’

Harling’s first diving apparatus is on display at the Diving Center, a gas mask that he bought for something like 50 cents at a military surplus store when he was in high school. He converted it for diving using two tire pumps and a hose.

“We just piled the stuff in the skiff, rode out to the mouth of the Mill River and went diving,’’ he said. “I saw two boats go by overhead, and said, ‘Oh [expletive], I don’t think this is a good place to be,’ and at that point gave it up. It was rather hard to get two kids to push a tire pump . . . but it worked, and that’s what got me started.’’

As an adult, he took jobs with commercial diving businesses recovering lost items from the bottom of the harbor or working on boat repairs.

“I was on my boat tied up over at Rocky Neck, and there was a rap on the hatch cover, and a fella from a fishing boat said, ‘You the diver?’ ‘Yeah.’ ‘So-and-so, the watchman on the boat, coughed, and he coughed his false teeth overboard, could you go get ’em?’ I says, ‘No problem,’ ’’ Harling said, and he laughed. “I went down and hit the bottom and there’s his false teeth right there.’’

There was a starfish about to close over the teeth though, Harling said. He rescued the dentures, took them to the surface, and passed them on to the watchman, who popped them right back into his mouth.

Harling can also tell of grander adventures, like being on a team that dived to the wreck of the Andrea Doria repeatedly in 1966.

“It was spooky,’’ he said. “Once you hit the cold water, it’s clear, and visibility was quite spectacular. I was in the bridge. . . . I stood on the wheel.’’

More recent adventures include dives to the wreck of the historic frigate the USS New Hampshire, just off Manchester-by-the-Sea. He displays a copper spike from the wreck, which he said is believed to be from Paul Revere’s foundry.

A few moments later, he’s also showing off the latest high-tech dive masks from Morse Diving Inc. of Rockland, a state-of-the-art company that makes sure he has its latest products for his exhibit.

“A lot of commercial guys come in here to look at the stuff and they’re just astounded,’’ said Munro.

Harling is at the Diving Locker from 9:30 a.m. to 5 p.m. every day except Thursday, when the exhibit is closed, and Sunday, when it’s open from 12:30 to 5 p.m. There is no phone number. The Maritime Heritage Center is open Memorial Day Weekend through Columbus Day. For information, visit www.gloucestermaritimecenter.org. Joel Brown can be reached at jbnbpt@gmail.com.