An architectural glance at history 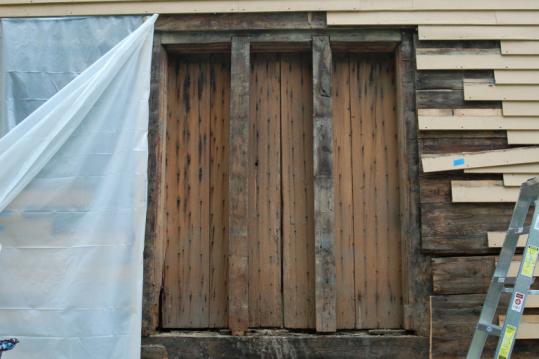 The 1681 meeting house doors were found in the west wall of Old Ship Church in Hingham four years ago during an architectural preservation study. (Andrea Gilmore)
By Robert Knox Globe Correspondent / January 20, 2011

Architectural historian Andrea Gilmore says she has worked on “some pretty interesting buildings’’ in 30 years as a preservation specialist, documenting construction and building use history.

“We have found things of great interest, things I could not have anticipated when I began,’’ Gilmore said, including uncovering possibly the oldest doors in the country, hidden in the walls of the Old Ship Church in Hingham.

The director of architectural conservation at Building Conservation Associates, Gilmore will speak on what she has learned about how four of her favorite buildings were made and used tonight at the Dedham Historical Society.

A Dedham resident and a member of the society’s board of directors, Gilmore was an obvious candidate for the organization’s lecture series and chose her own topic, said Vicky Kruckeberg, the society’s director. New England’s old buildings “hold a treasure trove of information about the design, finishes, and furnishings of the region’s rich architectural heritage,’’ the society stated.

Gilmore has looked behind walls to discover the 17th-century Hingham church’s secrets and documented the varied history of a Nantucket theater that began life as a Quaker meeting house. In addition to Old Ship Church and the Dreamland Theatre, her talk will focus on the Abyssinian Meeting House in Portland, Maine, and the First Church in Dedham.

“We look at painting, wood species, nails,’’ Gilmore said. The work tells us what buildings looked like at the time they were built, based on new evidence, such as the discovery of the original doors at Old Ship Church built in 1681 and covered up during a later building expansion.

“They are the oldest surviving doors in an American building in their original place. It was breathtaking,’’ she said, adding that they survived because they were covered up.

The discovery reinforces the current restoration effort of a historic building that’s gone through some transformations over the centuries. The Hingham congregation’s first simple structure, built in 1635, was replaced in 1681 by what the church describes as “a rather imposing Gothic structure — the central portion of the building’’ that churchgoers and visitors still see today. The timber-framed building was significantly expanded in the 18th century and in the 19th century received a Victorian makeover.

“If you’re familiar with Old Ship, can you imagine it with a Victorian interior, curved pews, wallpaper on the wall, paint on the ceiling?’’ Gilmore asked. A later generation of Old Ship parishioners decided the Victorian interior was not in keeping with the church’s Colonial architecture and restored it in the 1930s to its 1755 look.

In contrast to Old Ship’s endurance as a church, the Dreamland Theatre’s myriad transformations are a big part of its history. A large shingle-clad building built in 1831 as a religious meeting house, it was converted into a factory, then into a straw works, a social hall, and a roller-skating rink. It was at one time disassembled and moved across the harbor to become part of the Nantucket Hotel, then floated back across the harbor in 1905 to become a theater for vaudeville and motion pictures.

“Like a phoenix, it was reincarnated time and time again,’’ Gilmore said. “When the resources of an island are limited, people learn how to use buildings. It’s part of the island’s traditions.’’ Unfortunately, she said, the structure is currently disassembled.

The two other buildings in her talk also began as churches. Built by free African-Americans in 1828, the Abyssinian Meeting House was one of the first African-American religious centers established in this country and was once the hub of the Underground Railroad in Maine, according to Building Conservation Associates, the preservation consultant for the building’s current owners. The meeting house was purchased in the 1990s for historic preservation by a group that plans to restore it as an African-American historical site and museum.

Like Old Ship, the First Church in Dedham has deep roots in Colonial history, having been founded in 1638. In recent times, the church’s current 18th-century meeting house required a restoration of its steeple, including repairs to the wooden trim, new sheet copper roofing, and repainting.

The Dedham Historical Society’s fall and winter lecture series has two more presentations scheduled. Historian Anthony Sammarco will speak on “Howard Johnson: 28 Flavors’’ on March 24. And author Robert B. Hanson will speak on “Dedham at the Crossroads’’ on April 14.