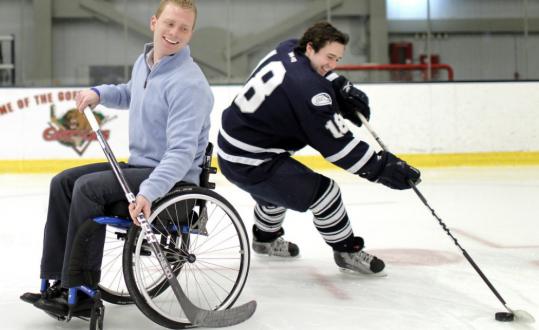 The seeds of their friendship were sewn on a rink during the 2007-2008 season. Tommy Smith was skating for Pingree School in Hamilton and Tucker Mullin was a postgrad student at Phillips Academy in Andover.

Less than a year later, the two were teammates on the Boston Bulldogs of the Atlantic Junior Hockey League. The future was bright for both: Smith, a high-scoring winger from Swampscott, and Mullin, a former Merrimack Valley Conference Division 2 MVP at Andover High. The sky was the limit.

But their lives changed forever during a game in August 2008 at a Haverhill rink.

Smith was chasing a player on a breakaway bid. As the Bulldogs goalie came out to cut down the angle, Smith jumped, but one of his skates caught a piece of the netminder’s equipment, sending the forward crashing into the boards headfirst.

Motionless on the ice, he was rushed to the hospital. Four vertebrae were damaged. Months of recovery followed, leading to a miraculous recovery that landed him back on the ice.

And then it happened again: another headfirst crash into the boards after catching a teammate’s skate, this time during practice. But this time the damage was permanent. Smith is paralyzed from the waist down.

The events of the last few years — two serious injuries, one devastating and life-changing — has only made the two young men stronger friends. Family, teammates, and coaches are awed by Smith’s upbeat attitude, and by Mullin’s loyalty.

“Every day he called, and I mean every day,’’ Smith said of Mullin, recalling his rehabilitation after his first injury. “Sometimes three or four times a day. He wanted to know how I was doing, if there was anything he could do for me. He wanted to keep me in the loop, to let me know how the team was doing, how my teammates were doing.’’

Now a sophomore at Saint Anselm College in Manchester, N.H., where he is the leading scorer, Mullin has been nominated for college hockey’s Humanitarian Award for the tireless support of his friend.

A second chance Five days after his first accident, Smith was diagnosed with damage to the C1, 2, 3, and 4 vertebrae. Surgery was ruled out because of the proximity of the injury to his brain. If the swelling around his spine was not reduced, he would likely suffer nerve damage. With help from a family friend, Smith was admitted to the Miami Project to Cure Paralysis at the University of Miami, where he met Dr. Barth A. Green and a team of specialists.

It turned out the original diagnosis was incorrect. There were dislocations along the C1, 2, 4, and 5 vertebrae of his spinal column, and he also learned that he had suffered a dislocation of his brain stem.

“I asked what dislocated brain stem meant and they basically told me that my head was not properly attached to my body,’’ said Smith.

But he started to make remarkable progress. Thanks to his physical therapy, his vertebrae and brain stem began shifting back into place.

His doctors were amazed. They attributed his progress to his excellent physical condition, especially his strong neck muscles.

By May 2009, Smith was walking, running, lifting weights, and doing nearly everything that he was doing before his injury. Everything except playing hockey.

In July, doctors gave their blessing for him to play again. Dr. Green assured Smith that he was no more susceptible to another spinal cord injury than anyone else. What just seven months earlier had appeared impossible had become possible.

His father, Ken, said that as a parent, he was obviously concerned. But “after talking with him, I couldn’t do anything but support him,’’ he said. “It wouldn’t be fair to stop him from pursuing his dreams of playing at a higher level.’’

Tommy Smith said a number of people thought he was crazy.

No one was happier than Mullin.

Fight for a cure Six games into his return, in October 2009, Smith suffered another devastating injury.

While practicing with the Bulldogs at the ICenter in Salem, N.H., his skates caught those of a teammate. He fell and slammed headfirst into the boards. Airlifted to Boston Medical Center, he was diagnosed with an injury to the T3 vertebra, an injury completely unrelated to his first accident. Doctors said it was a one-in-100-million case.

“I was working when I got the phone call [from Bulldogs coach Mike Addessa],’’ recalled his father. “I’ll never forget his words. He said, ‘Ken, it happened again.’ I was speechless. I thought I was dreaming, that this wasn’t really happening.’’

Smith, now 22, is paralyzed from the waist down and uses a wheelchair. Mullin has regularly been at his side. In a tribute to his friend, he helped create the Thomas E. Smith Fight to Cure Paralysis Foundation last year.

Last August, the foundation raised more than $30,000 at a golf tournament. A Just Cure Paralysis game has been scheduled for Feb. 5 between Saint Anselm and Babson, where Smith is now a student. Boston College’s hockey team is also stepping up and planning a Just Cure Paralysis Awareness Night.

“To be honored for the Humanitarian Award is an honor and very humbling,’’ said Mullin, 22, named the top rookie in the Northeast-10 last season after finishing with 34 points (18 goals, 16 assists) in 26 games.

More than anyone, Smith, along with his father and mother, Diane, appreciate Mullin’s work.

“Tucker is just an exceptional human being,’’ said Ken Smith. “He is a real humanitarian. The friend he has been to Tommy is unbelievable. The two of them together are spectacular. When you ask me about them, I just can’t say enough.’’

“From a mother’s point of view,’’ said Diane Smith, “I think Tommy is the strongest person both physically and mentally I have ever met, just the way he has handled the past 2 1/2 years. We get our strength from him. He has taught us a lot. As for Tucker, he is the true definition of the word friend. He is just an incredible human being.’’ One deserving of the Humanitarian Award, according to her son.

“Everything we do is because of his efforts,’’ he said. “He is the glue to the foundation. He helped me get through this second injury. He always called, not just asking about my physical well-being, but of my mental well-being also. He is the most selfless and most sincere person I have ever met. He has been there with me every step of the way.’’

To learn more about the Thomas E. Smith Fight to Cure Paralysis Foundation, go to justcureparalysis.org. John Vellante can be reached at JohnPVel@aol.com.