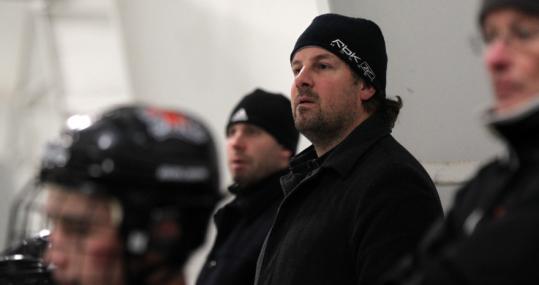 CANTON — Tony Amonte sat in his office inside the locker room at the Sportsplex, wearing a heavy black leather jacket after a game last week against Independent School League rival Rivers.

The jacket personified the swagger of Amonte’s storied hockey career and his success at the highest levels of the sport. He’s infusing that same swagger as a first-year coach into the boys’ hockey program at his alma mater, Thayer Academy, a private school in Braintree looking to rebuild the legacy of a once proud program that produced Amonte, former linemate Jeremy Roenick, and Brooks Orpik.

A 1989 Thayer grad who played 16 seasons in the National Hockey League and was a member of two US Olympic teams (1998, 2002), Amonte brings a new, refreshing attitude to a team that finished 3-18 last year.

Under the tutelage of the 40-year-old Amonte, Thayer has already surpassed last season’s win total (currently 4-6 after an 8-2 loss to Noble & Greenough on Saturday).

“There’s a new attitude in this locker room; it’s a great time to be here,’’ said Thayer defenseman Brad Peterson , a senior captain from Brockton.

Senior goalie Chris Tasiopoulos says that Amonte brings an up-tempo approach to practice and games, evidenced by Thayer’s physicality and frequent line shifts on display in the 4-2 loss to Rivers.

“His playing career speaks for itself,’’ said Tasiopoulos, a Norwell resident. “It’s great playing for someone who’s had that much experience with the game. He works hard for us, so it makes us work harder. The team’s definitely on an upward route. A lot of guys want to work. They want to work for the coaches and the coaches want to help us out. I think [Amonte] brings out the best in all of us.’’

With McEachern and Young, “what sticks out about both their teams is the work ethic,’’ Amonte said. “They know how to get the guys working. They know what it takes to get to the next level.’’

Matt McGuirk, Thayer athletic director, said that it was a mere coincidence that all three coaches were hired in the same month.

“It was a funny situation,’’ he said. “All three schools had openings and all three had been talking through the process and all three were hired in a similar time frame. But that wasn’t the goal from the get-go.

“I think when the coaching change took place, we had between 70 and 90 candidates. The committee ultimately thought Tony was the best fit for what we were looking for. He’s a household name in hockey with knowledge of the school and the South Shore. He brings enthusiasm and vigor to the program and that’s what we want. I think Tony felt it was time to give back something to the school that had given him so much.’’

Amonte didn’t know what to expect; previously, he had only coached at the youth level. His son, Ty, a seventh-grader, played for Thayer’s middle school team.

“I definitely enjoy the game,’’ said Amonte, who racked up 198 points in 81 career games as a player at Thayer. “I know a lot about the game. I don’t know much about anything else, businesswise. But it’s been a lot more fun than I expected. And it’s going to be fun trying to rebuild this thing, getting kids back interested in Thayer Academy and letting them know that we’re a school that’s going to make a push.’’

Since Amonte’s hire, both McGuirk and the coach said they’ve seen renewed local interest in the program and expect an influx of talent in the coming years despite an uphill battle to sway players from the grip of junior hockey.

“We’ve just got to get back to our identity; we’re a working man’s school,’’ Amonte said. “The kids are working hard; they work hard in school, and they work hard on the ice. We’re obviously a South Shore school, so we’ve got to get those kids from the South Shore to start reapplying to Thayer and start thinking that Thayer’s a great possibility as a school instead of driving by and going to another private school.’’

As the only ISL school without a rink on campus, Thayer is in the preliminary stages of securing financing for a multipurpose field house — including a mixed-use space convertible to an ice rink during the winter season.

“We’re headed in the right direction,’’ Amonte said. “I think the school is behind our program 100 percent. Hopefully a lot sooner than later we’ll have the arena on campus and be where everybody thinks we should be.’’

With one second remaining in the game, junior captain Emily Lafond of Hanover notched a power-play goal for a 2-2 tie. The Cougars had pulled freshman goalie Jessica Mitchell (33 saves) and benefited from a tripping call.

“Against good teams we seem to bring our better game,’’ Notre Dame coach Todd Jacobson said. “I told the girls at practice Saturday night that since the tie we’re the talk of high school hockey. But then I said we really haven’t done anything yet. Anytime you can get a tie with St. Mary’s it’s rare.’’

Junior Ellie Long (Cohasset) set the tone with a first-period goal as Notre Dame skated to a 10-9 first-period shot advantage. Jacobson said prior to Long’s goal, the Cougars had gone 4 1/2 games without scoring on St. Mary’s.

St. Mary’s (5-0-2) had a scoreless tie with Braintree earlier this season and has an unbeaten streak of 84 games dating back to the 2007 playoffs.

Hockomock League Entering this week, the Hockomock League was the only boys’ league south of Boston with two undefeated teams. Mansfield (5-0-1) plays in the Kelly-Rex division and Canton (4-0-1) plays in the Davenport. The two have their only scheduled meeting of the year in a divisional crossover on Jan. 22 at Metropolis Rink in Canton. . . . Leading the South Shore League, Abington-East Bridgewater (5-0-1) had outscored opponents, 42-8, prior to last night’s matchup with Rockland (6-3). . . . Pembroke was 4-0-2 in the Patriot League prior to last night’s bout with Scituate.

Mike Mancinelli can be reached at mmancinelli@globe.com.