When 19,000 penguins faced death, The Penguin Lady flew from Georgetown to help. Now she tells the tale. 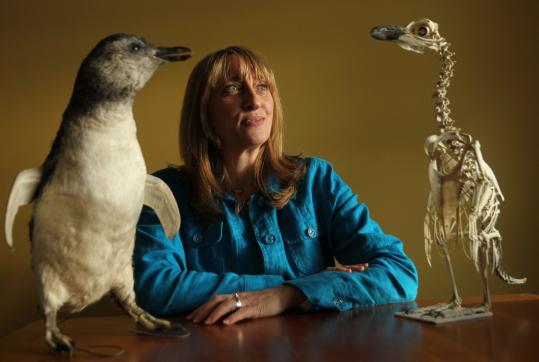 Dyan deNapoli, a.k.a. The Penguin Lady, at her Georgetown home with a stuffed adolescent penguin and the skeleton of another penguin. (Essdras M Suarez/Globe Staff)
By Joel Brown Globe Correspondent / January 9, 2011

GEORGETOWN — You really wouldn’t want a penguin as a pet, Dyan deNapoli said, laughing as if to add, you have no idea.

“They smell to high heaven, and they bite, and they’re not happy if they’re alone. They need to be with lots of other penguins,’’ she said.

But deNapoli loves those little birds, despite bearing scars from their razor-sharp beaks. And the adventure of her life came in 2000, when she joined in delivering hands-on care to 19,000 oil-soaked African penguins. Then working at the New England Aquarium, deNapoli was one of the experts who led thousands of volunteers in a desperate rush to save the birds after an oil spill off Cape Town, South Africa, steering the species back from the brink of disaster.

“What surprised me the most when I first started interning at the aquarium and getting to know penguins is that they each have such an individual, unique personality,’’ she said, sitting in her bright living room overlooking Rock Pond in Georgetown.

“The other thing is that they’re very intelligent. The penguins at the aquarium, for example, they know their names and they’ll respond when you call them — if they feel like it,’’ she said. “They’re very much like a cat that way, in that if they want attention, they’ll come over and solicit it or respond when you call. And if they don’t, they’ll just ignore you and swim away in the other direction.’’

Her interest in things aquatic began when she was a kid growing up in Marblehead and “always into animals and nature and being at the ocean as much as possible.’’ She remembers checking out the penguin exhibit at the then-new New England Aquarium. A visit to the Miami Seaquarium when she was 5 left her with a fantasy of being a dolphin trainer, which followed her into adulthood, along with a love of nature.

She became a silversmith, designing and making jewelry. She made pins of endangered species and gave a portion of each sale to environmental groups, but still felt something was missing. Then her parents gave her an Earthwatch Institute trip as a 30th birthday gift. She spent four weeks in Hawaii in 1992 as a volunteer at an open-air laboratory, interacting with dolphins and even learning to communicate with them in sign language.

It was a life-changing experience. When deNapoli returned to Massachusetts, she had to pursue her dream. She started a course of study in veterinary technology. During her final year of school, in 1995, she took an internship at the penguin exhibit at the aquarium and fell in love with the flightless birds. After she got her degree, she continued to volunteer until a staff job opened up in the penguin exhibit.

She was working at the aquarium in 2000 when the iron-ore carrier MV Treasure foundered off the coast of Cape Town, spilling 1,300 tons of oil into the ocean and fouling prime penguin habitat. The oil coating the birds’ dense feathers removed the waterproof protection the feathers normally provided from the cold ocean water. Too tired and chilled to swim, the birds could not fish or feed their chicks, and as they tried to clean their coats, they swallowed the caustic oil.

Volunteers began collecting thousands of oiled penguins, and deNapoli was among the specialists from around the world recruited to manage the fast-growing rescue operation.

When deNapoli entered the first of four vast warehouses holding the oiled birds in dozens of small, improvised pens, she expected to hear the furious squawking of thousands of the highly vocal birds. Instead, “we were met with an eerie silence, immediately signaling to us in undeniable terms the stressed mental and physical state of the penguins inside,’’ she writes.

The army of volunteers quickly went to work force-feeding and hand-cleaning the birds. “You stopped noticing [the smell] when you were getting shredded by a penguin beak,’’ said deNapoli, who lost 12 pounds in 18 days in the warehouse. When it was over, the rescuers had returned 95 percent of the birds to the wild.

“That experience was grueling on every level, mentally, physically, emotionally, spiritually. It was truly the hardest thing I’ve ever done in my life,’’ she said. “But what balanced that out was this international response, these 12,500 volunteers who showed up from every corner of the earth. That was so inspiring in the midst of this horrendous man-made disaster, to see all these people giving so much of themselves to help these penguins.’’

She brought the same spirit to the penguins at the aquarium, said Logan Schmidt of Boston. They became friends after deNapoli interviewed the then-college student for a volunteer position in 2002.

“She’s an incredible caregiver; she is so attentive to their health,’’ said Schmidt. “She can instantly tell if something’s wrong, if there’s something different about a bird that day. She had them memorized.’’

Schmidt still volunteers in the penguin exhibit a couple of times a month even though she’s out of college and working as an editor of life-sciences textbooks for a Boston publisher.

In 2004, deNapoli left her job as senior penguin aquarist at the aquarium to shape a future for herself as The Penguin Lady. She gives talks about penguins, their role in ecology, and the great South Africa rescue to students and community groups. She’s served, too, as on-board expert for eco-cruises to penguin habitats. She gives a portion of her proceeds to penguin rescue groups and works to raise consciousness. The license plate on her black Prius is PNGWIN.

Still, many penguin populations continue to decline. And good news about the environment is often overwhelmed by bad.

The penguins do their part to encourage her when she goes back to the aquarium to visit.

“The birds remember me, especially the ones I hand-raised, even though I’ve been gone for six years,’’ she said. “When they see me or hear my voice, they start squawking and honking and braying and come swimming over to greet me. It’s really kind of cool to be remembered by these little guys.’’