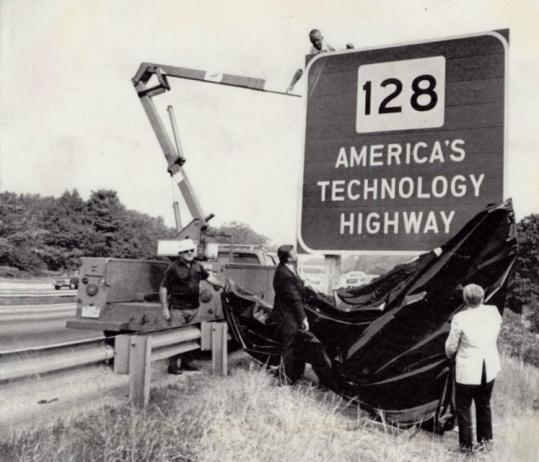 Those old signs that proclaimed Route 128 “America’s Technology Highway’’ are gone but far from forgotten. I recently stumbled across a fan of the signs, which were taken down in the 1980s after a short but memorable run.

Wellesley real estate broker John Prescott, who helps find homes for high-tech and biotech executives moving to Massachusetts for new jobs along the Route 128/I-95 corridor, displays an old photo of one of the signs on his blog, BostonKayakGuy.

Prescott, for one, said he wouldn’t mind seeing the signs return, contending that Route 128 remains a beacon for top talent. “It just seems odd they wouldn’t be able to memorialize it in some fashion,’’ he said. “Maybe there were some complaints from Silicon Valley.’’

I put the question to state highway officials. As Massachusetts pushes to compete globally in the New Economy, why not play up an obvious strength?

Alas, life, especially when dealing with government bureaucracies, is never that simple.

The first blow to America’s Technology Highway came after the signs were unveiled in 1982. Veterans groups protested that Route 128 already had a name, “The Yankee Division Highway,’’ commemorating a Massachusetts military division dating to the Civil War.

So the signs were changed to read “America’s Technology Region,’’ with the offending word “highway’’ struck out.

But that was not enough to satisfy federal transportation regulators, who have rules against such extraneous signage, deeming it a safety threat.

Now the signs were nice, but I hardly think they were the cause of rubbernecking among passing motorists. Besides, with traffic now down to a crawl along much of 128 during rush hours, commuters could use a little roadside inspiration, don’t you think?

Still, since it’s been 20 years, the signs, if they were ever to make a comeback, could probably use some updating as well. While tech is still big along 128, a new version of the old sign would have to reflect the corridor’s changing culture of innovation, which now includes everything from biotechnology research to business services.

And the new leader is . . . If there were a revival, the signs might have to be changed to read “America’s Biotech Highway.’’

A startling shift has taken place: Biotechnology companies now lease or own more space along the western stretch of Route 128 than software firms.

The changing of the guard took place without notice last year. Buffeted by the recession, technology companies cut back on the amount of space they were leasing along Route 128 between Lexington and Dedham.

This short but key stretch of 128 accounts for half of the biotech market in Greater Boston beyond Cambridge. Throw in Natick and Framingham, home to a big campus — OK, not right in the corridor but certainly close — and that percentage rises to 68 percent, Carroll says.

Shire Pharmaceuticals, which is rolling out a big complex in Lexington, is a major driver of some of the recent growth by life sciences companies along 128.

It is a migration that actually started to kick into gear more than a decade ago, when moved to Waltham. John Hennessy, who oversees the international corporation’s Boston area research and development operations, is now first vice chairman of the Waltham West Suburban Chamber of Commerce.

“Biotech has taken over as the greatest single occupier of business and office space in Route 128 West,’’ Carroll said.

Still, don’t count out tech yet. Dassault Systèmes, a French software giant, is preparing to move into 325,000 square feet along Wyman Street in Waltham starting in midyear.

New target for bridge fix Hooray: This year may bring the end to one of Route 128’s migraine-level traffic headaches.

Waltham’s notorious Winter Street bridge project — which has caused years of rush-hour misery around 128’s Exit 27 and far beyond — should wrap up in August, state officials say.

But given past delays, skepticism may be in order. Work began on the $22 million project back in 2005, with plans to replace the four-lane Winter Street bridge over Route 128 with a seven-lane span.

The original contractor collapsed in 2006, a new one took over in 2007, and progress since then has been steady but slow. For quite a spell, state transportation officials predicted a fall 2010 opening, but now they say August is the new end date. Richard Nangle, a state Department of Transportation spokesman, called the latest deadline realistic. Stay tuned.