THIS STORY HAS BEEN FORMATTED FOR EASY PRINTING
Globe North People

Origami for a good cause helps Hamilton food panty 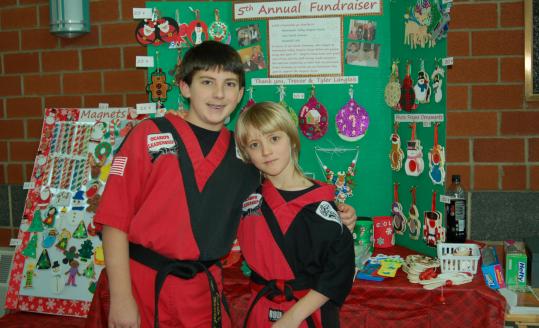 HOLIDAY ORIGAMI: Sebastian Carpenter, 12, has a talent for creating origami. And, he’s been putting it to good use.

For the second year, Carpenter, a student at Brookwood School in Manchester-by-the-Sea, made figurative and geometric origami in festive holiday colors, which he gave to customers in exchange for a check to the Accord Food Pantry in Hamilton.

“If one assumes that it costs around $50 of food pantry food to feed a family of four a good, full meal, that means his efforts will enable nearly 30 families to have a meal they otherwise may not have had,’’ said his mother, Elisabeth Carpenter.

“As his mother, one would expect me to say this, but I find it incredible that one 12-year-old can single-handedly use his origami skills to generate so much good will, and money, for a good cause,’’ she said.

A REMEMBRANCE: When brothers Trevor and Tyler Langlois, ages 12 and 8, received their various belts in karate — leading to black belts for both — their great-grandmother, Dorothy Dumas, attended each and every ceremony.

“The boys were touched by the kindness of the nurses and staff and how beautiful the house was. The staff welcomed them with open arms, encouraging them to visit as long as they wanted,’’ said their mother, Amanda Langlois of Newton, N.H. “They wanted to do something to give back.’’

During a holiday fair at Ocasio’s True Martial Arts, the brothers sold handmade ornaments and arts and crafts and raised $400, which they donated to the hospice house in honor of their great-grandmother.

“We were happy that our great grammy had somewhere so nice to be before she went to heaven,’’ said Trevor.

Each department created the baskets filled with gift certificates to grocery stores, personal items, soups, crackers, puddings, and fruit cups. The baskets were delivered by town employees and the home care nurses and therapists.

“Our staff distributed these baskets to our patients who have little or no family to share the holidays with,’’ said Donna SanSoucie, home health aide manager for Home Health VNA. “We’ve had an incredibly emotional response from the recipients, several of them were teary-eyed.’’

WHO’S WHAT WHERE: Winchester’s public access television, WinCAM, recently honored six individuals. Joe Viglione of Medford was recognized as producer of the year. He started in access television in 1979, and is host of “Visual Radio,’’ which is approaching its 600th episode, and “The Buzzy Linhart Show.’’ Other winners included Melodie Wing, Beyond the Call of Duty Award; Dan Holahan, Most Dedicated Youth Producer; Robert Gotham, Most Advanced Youth Producer; Lydia Mullan, Most Ambitious Youth Producer; and Dan Sheridan, Best New Member. . . . Dr. Steve Paskal, an internist at the Medford practice of Harvard Vanguard Medical Associates, has received the Clinical Innovation Award as part of a team focused on hypertension. . . . Peter Spellman of Topsfield, director of the Career Development Center at Berklee College of Music in Boston, led a study that has resulted in a comprehensive resource of salary ranges for careers across the music industry. The study also analyzed trends and growth in the industry.

Items can be sent to wdkilleen@gmail.com.