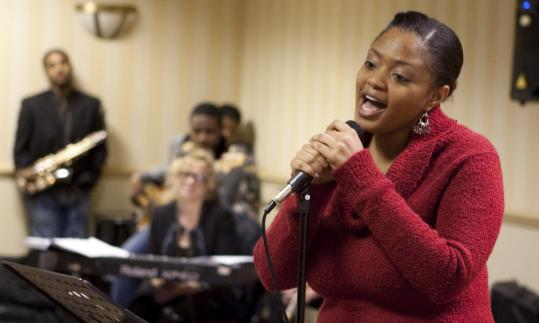 WATERTOWN — Within the walls of a traditional New England church that saw its longtime membership diminish and depart in recent years, a new band of faithful is growing quickly.

Redeemer Fellowship Church started 14 months ago with fewer than 20 people — including its pastor, the Rev. Chris Bass, and his wife, Brandi — in the former Phillips Congregational building on Mount Auburn Street. They will celebrate Christmas next weekend with nearly 100 members, drawn to a Gospel-driven style of worship that is springing up with increasing frequency around Greater Boston.

New churches have blossomed in area communities, including Brookline and Newton, over the past year, cultivated as “plantings’’ by large evangelical Christian groups that hope to spread the Bible-based message long associated with churches in the South and Midwest.

“Our perspective is that New England is underserved,’’ said Bob Sawyer, director of the Church Planting Center at Christ the King Presbyterian Church in Cambridge. “Boston has become a magnet for church plants. It is perceived to be very needy, spiritually.’’

Some statistics support Sawyer’s observations. The most recent national American Religious Identification Survey, released last year, listed New England as the least religious area of the country. Twenty-two percent of respondents said they had no faith of any kind, according to the study, conducted by Trinity College in Hartford.

Sawyer described large swaths of Massachusetts as “post-Christian,’’ with many young people a generation or two away from a regular churchgoing routine, as well as a significant number of disaffected Catholics who have fallen away from their childhood faith.

“This is an area with a rich religious heritage,’’ Sawyer said. “We are not trying to rescue anyone per se, but rather capture and inspire a new wave of people who have grown up in a way where spirituality has not been part of their upbringing.’’

Sawyer said his Atlanta-based organization, which represents evangelical Presbyterian churches, has been planning urban church plants in New York and Boston since 1994.

Christ the King in Cambridge opened in 1995. In the late 1990s it started three Brazilian churches in Boston, and in 2006 gathered an English-speaking congregation in Dorchester. Its most recent church planting is a group of about 20 worshippers that began meeting in September in Newton Lower Falls, he said.

Redeemer Fellowship was started by the NETS Institute for Church Planting, an interdenominational evangelical organization in Williston, Vt., that recruits recent seminary graduates to set up new congregations.

NETS bought the closed Phillips church last year for about $1.2 million after its members had merged with a church in Belmont. The congregation sold the building to NETS hoping to save it from the fate of some other former churches — conversion to condominiums, Bass said.

After finishing his seminary studies in Kentucky, the Houston native spent two years in the NETS training program, and serving in its home church in Williston, before heading to Watertown to launch Redeemer Fellowship, the organization’s fourth planting in New England.

Last Sunday morning, Bass preached from the Gospel of John, describing how the healing miracles of Jesus Christ were ignored and misunderstood by the ruling class of his time. Worshippers sang the Christmas hymn “What Child is This’’ and a more contemporary song, “The Wonderful Cross,’’ accompanied by an acoustic guitarist.

The growth of Redeemer Fellowship’s congregation has been aided by radio ads on religious programming stations and word-of-mouth testimonials.

“I like that Chris preaches from Scripture. It’s not his advice or any self-help, it’s ‘this is what the Bible says,’ ’’ said Jonathan Tetrault, 23, of Holliston, who along with his 22-year-old wife, Rachel, will celebrate their first Christmas as newlyweds and members of Redeemer Fellowship. “The center of our marriage is honoring God.’’

“The Bible is challenging,’’ said Rachel Tetrault, a schoolteacher who also serves as a music leader for the church. “We don’t pick and choose, or just talk about the easy parts.’’

Andrea Pierre, 29, of Milton, started attending services just over a year ago.

“It’s what’s in the Bible, verse by verse. It’s not watered down,’’ said Pierre, who works as a documentation specialist for a health insurer. She said she was also attracted to the church’s smaller midweek fellowship groups, which offer Bible study, prayer, and companionship.

“You can’t do a Christian life on your own. You need people to pray for you when you need support,’’ said Pierre.

Mars Hill Fellowship Church in Brookline is another new, fast-growing church. However, its planting organization is just a few miles away, at Jubilee Christian Church on Blue Hill Avenue in Mattapan. Jubilee, with approximately 6,000 members, is one of the largest Protestant churches in New England, and has set up a second congregation in addition to Mars Hill, church officials said.

The pastor at Mars Hill, the Rev. Joseph Ardayfio, and his wife, Ophelia, were young-adult ministers at Jubilee and wanted to establish a new church specifically reaching out to college students and young professionals.

Mars Hill held its first services last Easter, using rented space in a Holiday Inn; the location was chosen because of its close proximity to the MBTA, making it easier for members living in Allston and Brighton to attend.

This will be the first Christmas for the congregation, which has doubled in size to nearly 60 members since the spring, said Ardayfio. In addition to Sunday morning services, Mars Hill offers networking groups and seminars to help young adults reconcile their work lives with their Bible-centered beliefs.

Jean Lespinasse, 26, of Roxbury, said he was attracted to the church’s culture, and its emphasis on integrating faith and professional life.

“I liked the opportunities to get plugged into a community that feels like a family,’’ said Lespinasse, a technology manager in Boston who had attended services at Jubilee. He said he also appreciates how Ardayfio “challenges you to look at the Word. He asks you to turn on your brain, not turn it off. A lot of young professionals aren’t seeing the relevance of church these days, but this has challenged me to look at how my faith interacts with the marketplace.’’

“What we want to do is not a rote Sunday morning kind of thing, but really talk about how Jesus is relevant to our lives and lifestyle on a 24/7 basis,’’ said Ardayfio.

“We talk about how you can do your work, whatever it is, with integrity and connect to God.’’

Matters of Faith is a series of occasional articles on religious life in area communities. Erica Noonan can be reached at enoonan@globe.com.