Loosely supervised 'pickup' soccer games enable kids to learn, manage, and interpret the sport on their own 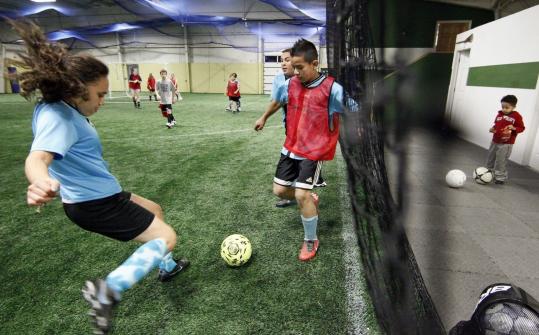 Esmeralda Hernandez tries to beat an opponent to the ball during a street soccer program in North Andover recently. (Photos By Winslow Townson for The Boston Globe)
By Brion O’Connor Globe Correspondent / December 2, 2010

NORTH ANDOVER — Almost two dozen boys and girls mill about the Home Grown Lacrosse indoor field during a recent Thursday evening. Jeremy Dalmer, a licensed youth soccer coach, signs in each child, directs them to the field, a bag of balls, and a bag of pinnies, and steps aside. He tells the kids they’re on the clock, and on their own.

The children, ages 10 to 14, gather in small groups from their own community — primarily Lawrence and North Andover — and start pawing at the artificial turf, or tapping a ball.

“My heart was in my throat when the [clock] first started,’’ says Dalmer. “I was just watching the kids, hoping they’d get it started. And they did.’’

Dalmer’s trepidation was justified. Any new venture runs the risk of failure. And “street soccer’’ is different: No adults are allowed to coach, referee, or even enter the playing area, except to deal with an injury. But this first session, judging from the reactions of parents, coaches, and the kids, was an unqualified success.

“I think it’s so cool. We can just play, and no one is yelling at us,’’ says Mariah Sanchez, 12, of Lawrence, who came with her brother, Xavier. “We get to meet new people. I already made a new friend.’’

At its core, the mission of “street soccer’’ — the term US Youth Soccer coined for these loosely supervised pickup games — is to return the sport to the kids. Sandlot, or street soccer, is how most of the world learns the sport. In this country, however, parents have taken soccer — generally considered a great outlet for wholesome recreation — and plopped it into a petri dish of adult expectations. For far too many children, the beauty has been squeezed out of a beautiful game.

“I see two fundamental approaches to coaching,’’ says Dalmer, 32, a father of two. “One being the adult trying as best he can to shape the kids into his vision of the sport. And the other being accepting how the kids see a sport, on their own.’’

Dalmer first learned of the street soccer program in 2008 at a National Youth License Course sponsored by US Youth Soccer National in Kentucky. The idea struck a chord, he says, because that was all he ever knew during his childhood in Vermont.

“I always loved soccer, but my family was religious, and I was never allowed to play organized sports growing up,’’ he said. “So the only soccer I could play was just with my friends, in backyards.’’

Street soccer has been part of US Youth Soccer for a decade, says Sam Snow, the organization’s coaching director. “It’s not terribly new,’’ he says. “It’s just growing slowing across the country.’’

The program, says Snow, is being integrated at all levels, from beginners to Olympic development teams.

“The genesis was, fundamentally, about giving ownership of the game back to the players,’’ he says. “It was also to provide an environment so kids could experiment in how to play the game — ball skills, tricks, moves that they’d do in a game — without the results being on the line, and the anxiety on the part of the adults, coaches, and parents surrounding the field. They’re anxious about the outcome, pressuring the kids to play it safe all the time. That was stifling the kids’ development.’’

The street soccer movement has a distinct “back to the future’’ feel, which makes sense, given soccer’s meteoric rise in this country over the past 40 years. Essentially, the sport’s popularity outstripped chances for youngsters to see the game played at a high level.

“I’m 55, and I grew up in Orlando,’’ says Snow. “When I was growing up, there were no examples at all. We were progressing in the dark. That was the case for most of the country.

“There was a need, for a long time, for the environment to be very coach-centered. For a kid to learn how to make a push pass, the coach had to demonstrate it, because the kid otherwise was never going to see someone execute a push pass.’’

Today, young players have ample opportunity to watch top-flight competition. “We can do this now because of our stage of growth as a soccer nation,’’ says Snow. “The kids have examples now of how to play the game. They can watch a lot of very good soccer on TV from all around the world.’’

Snow said he’s surprised that street soccer hasn’t taken off, but realizes the obstacles. “It’s growing slowly mostly due to the parents,’’ he says. “There’s a sense of, ‘What am I paying for?’ They want things that are, in their eyes, more structured. They want the referees, the won-loss record, having their kids on a roster.’’

Well-intentioned coaches can also be a roadblock. “Coaches say, ‘I have so little time with them. I don’t want to give up that time,’ ’’ Snow says. “And we say, ‘You’re actually going to be more productive this way, because you’re going to open the door for the kids taking leadership, taking ownership, increasing their organizational skills, their communication, their group dynamics, their understanding of one another’s capabilities.’ You grow through all of that.’’

Snow doesn’t have any empirical data to back up these ideas, but he says the program has a common-sense foundation. “As a bunch of soccer guys, we just know it works. It’s painfully obvious,’’ he says. “So we just haven’t bothered [to collect data]. But we probably should, to bring along skeptics.’’

The parents at Dalmer’s inaugural session didn’t need any convincing. “I love it,’’ says Janet Werry of North Andover. “Parents are too hands-on today. We have to back off sometimes. It’s good to let the kids organize things, and make decisions for themselves.’’

North Andover’s Mark Kornachuk, watching his daughter Kaitlin, 10, says: “It reminds me of when I was a kid, growing up [in Danvers], playing with my friends. We always played pickup games, baseball, football. You just assumed everyone would show up at the field. The kids got together, they made the rules, and they lived by them. They ruled themselves.’’

There are no uniforms to buy, and Dalmer splits the field rental fee among the number of kids who show up for a session (between $7.50 and $15 each, he says). Dalmer’s goals for his street soccer sessions are simple: “Just to have the kids enjoy the play enough to return. And that’s not even within my control.’’

The two one-hour sessions at Home Grown Lacrosse will be held Thursdays through March, and he’s already added a session Tuesdays for players under 10 that combines 30 minutes of skills training followed by an hour of street soccer. Some spectators predicted the sessions would sell out.

During a break in the action, Werry’s daughter, Morgan Fox, runs off the field for a drink. Asked if she is having fun, she flashes a bright smile.

Then Morgan scoots back inside the netting, to the field. To play. Like a child.