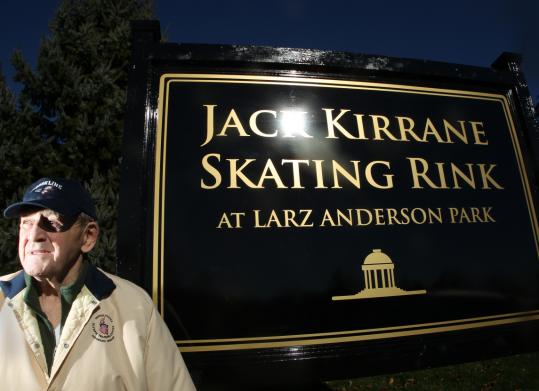 The Brookline sheet’s namesake gets a preview of the sign being unveiled officially on Saturday. (Esdrass M Suarez/Globe Staff)
By Marvin Pave November 28, 2010

As captain Jack Kirrane stood on the podium at Squaw Valley 50 years ago to accept the Olympic gold medal on behalf of the US men’s hockey team, the emotion of the moment enveloped him. Along with the realization that the years of lugging his equipment to rinks all over Eastern Massachusetts had paid off.

When Avery Brundage, the head of the International Olympic Committee, “put the medal around my neck, my knees were really shaking,’’ recalled Kirrane, who grew up skating on a pond at the Larz Anderson estate in Brookline. “It’s a hard feeling to describe.’’

During an 11 a.m. ceremony Saturday, his hometown may evoke a similar feeling when it dedicates the outdoor facility at Larz Anderson Park as the Jack Kirrane Skating Rink.

Invitations have gone out to past US Olympians. The guest of honor will be joined by older brother Billy Kirrane, a former hockey captain at Boston University, and younger brother Ed, a former high school coach who was a teammate on the US national squad in 1957.

“Help us honor a man whose Brookline roots run deep,’’ the invitation reads, “and who has given back to the community through the sport he championed.’’

Kirrane, a retired Brookline firefighter, said he was humbled and surprised when he heard what the town was planning.

“ I couldn’t believe it because a lot of years have passed since Squaw Valley,’’ said the 82-year-old, who remembers shoveling snow off the pond with his brothers.

“Mrs. Anderson watched us skate and she was very nice to us even though we were on her property.’’

The 64-acre estate, which includes an internationally known auto museum, was bequeathed to the town by the family, and has been developed into a popular recreational area.

Kirrane, who was also rink manager at Harvard University, is enshrined in the Brookline High School Hall of Fame with his brothers and their late sister Evelyn, who served as the town’s parks and recreation commissioner.

“She was a great field hockey goalie and softball player in high school,’’ said Kirrane, “and a real tomboy who would knock me on my butt when I got wise.’’

Twelve years before Squaw Valley, after graduating from Brookline High School, Kirrane had made the Olympic team as its youngest player. In 1960, he was its oldest.

After the 1948 Olympics, Kirrane played briefly for a farm team, the Boston Olympics. A pro career was cut short when he was drafted into the Army. After he returned, it was time to raise his two children and embark on a 38-year career with the Fire Department.

In that era, players who tried out for the national and Olympic hockey teams paid their own way. It was strictly amateur competition, and making the team required a four-month commitment.

Decided underdogs at the 1960 Winter Olympics in California, the American hockey team rolled into the championship round, where they upset Canada, 2-1, and the Soviet Union, 3-2. Then they needed to defeat the Czechs to capture the nation’s first gold medal in ice hockey.

“It became the most important game of my life because my dream was to win the gold medal,’’ Kirrane said. “I barely slept the night before.’’

Kirrane’s dream came true: In what was to be his final Olympic appearance, the rugged defenseman stood tall in a 9-4 win that set the stage for the 1980 “Miracle on Ice’’ squad, which stunned the world in defeating the Soviets en route to the gold medal at Lake Placid.

“Jack would make a guy think twice about hanging around our net,’’ recalled the 1960 team’s goaltender, Jack McCartan. “He was a tough competitor.’’

Following the presentation by Brundage, Kirrane received a telegram that read: “Congratulations to you and your mates. You showed the old Bay State spirit.’’ It was from Massachusetts Senator John F. Kennedy, also a Brookline native.

When he arrived at Logan Airport, Kirrane was welcomed by his friends from Ladder 2 in Brookline, who escorted him home. A banquet in his honor was held at the Brookline High gym.

On Saturday, he will be honored again in his hometown — at the rink overlooking the pond where he first laced up a pair of skates.

Here and there Lincoln-Sudbury Regional High graduate Jennifer Gossels, a sophomore at Williams College who finished second at last weekend’s NCAA Division 3 cross-country championships, has been named the New England Athlete of the Year by the US Track and Field and Cross-Country Coaches Association. “If you want to compete at a high level you have to be willing to train at a high level, and Jennifer has always been willing to do that,’’ said Williams assistant coach Patrick Wales-Dinan. . . Bentley University senior quarterback Bryant Johnson, a Milford High grad, was the unanimous choice by the Northeast-10 Conference’s football coaches as its Most Valuable Player. The 6-foot-1 Johnson completed 66 percent of his passes (best in the NE-10) for 18 TDs, and ran for five more scores as the Falcons (5-4) capped their season with four straight wins. He has one more year of eligibility. Two teammates, senior tight end Mike Slattery of Natick and junior safety Don Hopkins of Waltham, were also named to the NE-10 first team.