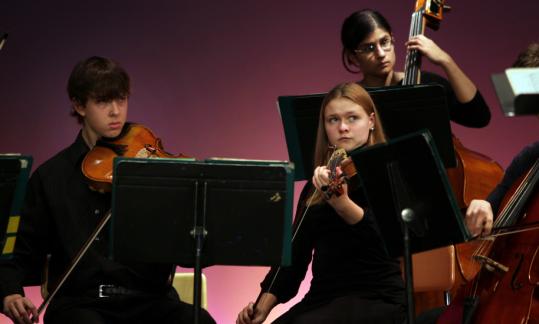 WALTHAM — Frank Roberts found out early in life that the theater wasn’t going to make him rich and famous.

So he took his love of theater and used it to make himself, and many others, happy.

Friends, former students, and Broadway veterans alike took the stage at the Robinson Theatre in Waltham to celebrate the life of Roberts, the longtime teacher, director, and mentor to generations of Arlington High students. He died on Aug. 17 at age 69 of complications from a stroke.

Roberts retired in 2001 after teaching for 35 years at Arlington High, where his shows won awards and he established a four-year theater arts program; he was also well known for his 17 years of work with the Reagle Music Theatre of Greater Boston, a Waltham-based ensemble where he was coordinator of special projects and director of public relations.

Maguire was performing in “How to Succeed in Business Without Really Trying’’ at the Goodspeed Opera House in Connecticut and couldn’t be in Waltham for the Roberts tribute, but recalled his role in her career in a telephone interview.

“He had such faith in me,’’ Maguire said. “I wouldn’t be where I am today without him. He helped me put together my auditions and was a cheerleader on the sidelines. He suffered my losses and celebrated my victories.’’

Cook and Cronin both said at the memorial service that Roberts was like a second father to them.

“He made me believe in myself,’’ said Cronin.

Cook, who graduated from Arlington High in 1990, was alternately funny and touching in his tribute.

“I would have to say that Frank Roberts was one the most important people I ever will have met in my life, personally and professionally,’’ said Cook, 38, in a recent phone interview.

Cook said he was “searching for himself’’ when he transferred from Minuteman Tech in Lexington to Arlington after his freshman year.

It was the second day of theater class when Roberts wanted to talk with him.

“I thought I was in trouble already,’’ said Cook. “But he pulled me aside and said, ‘I see a lot of myself in you. I want to help you remove obstacles. I see fear.’ ’’

Cook said it was fear — a lot of fear — that was preventing him from doing the things he wanted to do. Slowly but surely, he overcame it, and starred in “Grease’’ in the Danny Zuko role; he and Roberts stayed in close contact.

Arlington High was well represented at the memorial service; the school’s Madrigal Singers performed “May it Be’’ from “Lord of the Rings,’’ and the school’s Honors String Orchestra performed music from “The Civil War.’’

Pasquale Tassone, the interim head of fine arts at Arlington High, worked alongside Roberts for 30 years, including conducting for his annual spring musical.

“He was reserved,’’ said Tassone. “He was always there for the kids but he never wanted to take a bow.’’

“Once he got the show off the ground, it was the kids’ show,’’ Joanna Roberts said of her husband. “He was uncomfortable in the spotlight and wanted others to have it.’’

She said her husband loved the theater, and the students who came through his program.

“He cheered for them, he hurt for them like a surrogate father,’’ she said. “We never had children and he loved to keep tabs on them, Googling them to see what they were up to.’’

Frank Roberts graduated from Boston University, studied in New York, and earned his Actors Equity card before landing in Arlington.

Pfisterer had tears in her eyes at the tribute as she sang “I Could Have Danced All Night’’ from “My Fair Lady.’’

“As a director, Frank loved the process of putting it together,’’ said Pfisterer, who starred in “Phantom of the Opera’’ on Broadway. “He enjoyed collaboration and wanted your input.’’

Robert Eagle, the Reagle troupe’s founder and executive producer, coordinated the memorial celebration, which was emceed by actor and former news anchor Scott Wahle, as a labor of love.

“He was a fabulous colleague,’’ said Eagle. “A real gentleman, a great judge of talent. He said, ‘Call me when you need me.’ And I did.’’

Joanna Roberts has established the Frank Roberts Non-Equity Actors Fund in recognition of the amateur actors he worked with who underwent financial hardship to perform in Reagle productions.

Pfisterer said it was perfectly in keeping with his philosophy.

“He understood that someone was no less a performer because they chose to make their living doing something else. But with him, it was a level playing field for everyone, professionals and nonprofessionals,’’ said Pfisterer “There were no favorites. He had high standards for everyone, including himself.’’

Donations to the Frank Roberts Non-Equity Actors Fund can be made c/o Reagle Music Theatre, 617 Lexington St., Waltham MA 02452. Rich Fahey can be reached at faheywrite@yahoo.com.