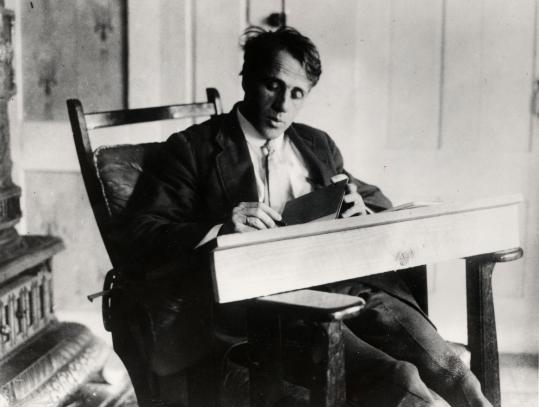 Poet Robert Frost (shown here circa 1915) made his first foray into teaching at Methuen’s Second Grammar School. The 1893 attendance register at right was handwritten and signed by Frost. Restoration work on the document (below) is nearly complete. (Globe File Photo; Photos Above And Below By Wendy Maeda/Globe Staff)
By Karen Sackowitz Globe Correspondent / November 4, 2010

‘I had decided that I was up to no good at Dartmouth, so I just went home to Methuen.’’

So reads a quote from legendary poet Robert Frost, given during an interview for the alumni magazine of Dartmouth College, which he attended briefly in the fall of 1892.

Now, thanks to the efforts of Methuen city officials and local Frost fans, an authentic piece of history symbolizing the poet’s time in Methuen has been preserved for future generations.

Following receipt of a $3,000 grant from the federal Institute of Museum and Library Services, restoration work is nearly complete on an 1893 attendance register from Methuen’s Second Grammar School, handwritten and signed by Frost. The poet taught briefly at the school as a favor to his mother, Isabelle Moody Frost, who was teaching there, and whose unruly class led her to enlist her son’s help. His time there, between January and March of 1893, was an undertaking that would become a major theme in the years to come.

“This was his first teaching job,’’ says Matt Kraunelis, chief of staff for the mayor’s office and a Frost fan. “Even though he didn’t do it for long, he got his start right here in Methuen.’’

Frost left his post at Second Grammar School before the end of the school year, choosing to continue his own studies at St. Lawrence University in upstate New York. The following year, however, he returned to the area, teaching grades 1 through 6 in Salem, N.H., says Kraunelis. Around 1899, Frost lived in Methuen again, this time on Prospect Street in a house on a chicken farm. A year later he moved to Derry, N.H., where the Robert Frost Farm remains today as a National Historical Landmark.

Kraunelis first learned of the Methuen school register in 2008 from Michael Hughes, chairman of Mayor William Manzi’s Commission on Housing and Preservation of Historic City Archives. Hughes had discovered the record 20 years before when he was a Methuen High School history teacher. Realizing that teachers were legally required to keep attendance registers, and that Methuen was required to retain them, he did some research and found the Frost document. It was then passed along to the Methuen Historical Society and stored along with other items in the basement of the local Masonic lodge.

Enlisting the help of Lynn Smiledge, historic planner for the city of Methuen, Kraunelis tracked down the register, which was resting within two feet of flood water that had breached the building. It was then moved to a safer location, narrowly missing ruin in another flood in the Masonic building that would have reached it had it still been there.

Kraunelis, who is also a cofounder of both the Robert Frost Foundation in Lawrence and the Grey Court Poets, a local poetry writers’ group, says preserving the register is of true historical importance.

“It’s the only physical link we have to the time Robert Frost was a teacher here in the city,’’ he says. “Even the building in which he taught has been torn down.’’

The register is now in the hands of experts at the Northeast Document Conservation Center in Andover. In its final phases of preservation, the book is now being stitched and rebound. Once the process is complete, the piece will be put on temporary display in the Tenney Gatehouse, home of the city’s historical society, but then will be moved to safe storage to avoid damage caused by overexposure to light. It will then only be presented publicly for special occasions.

A collection of color photographs of the register, however, will be arranged for a permanent display in the gatehouse at 37 Pleasant St., according to Joe Bella, Methuen Historical Society president.

An exhibit will also be housed at the city historical commission’s new Charles Street location once the move there is completed.

Among the photographs will be shots of Frost’s granddaughter, Lesley Lee Francis, when she viewed the document for the first time in 2009.

In town to give a presentation to teachers at the Lawrence Library prior to the 12th Annual Robert Frost Festival, Francis was pleased to see the handwriting of her grandfather, as well as that of her great-grandmother Isabelle, in the register.

A writer and retired professor, Francis has lectured and published extensively on Frost.

Thanks to Frost’s legacy, what was once a simple attendance book has become something much more for the people of this city.

“Anything with his signature on it is worth a lot of money,’’ Kraunelis said. “But to Methuen, it’s priceless.’’