At Winchester High, winning more than one for Milan 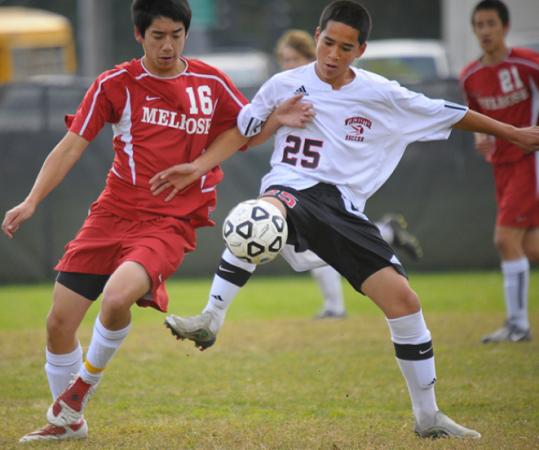 Before it happened, Milan Moosavizadeh lit up every moment, and every day, with his smile.

In his one season on the varsity boys’ soccer team at Winchester High, one of great promise and potential, he left a lasting impression.

“For me, Milan was like a little kid. Every day, I’d come to practice and see his face and it just cheered me up. There was just something about him that was special,’’ said Lubo Svetiev, a senior captain for the Sachems.

Now the 15-year-old teen serves as inspiration for his teammates in the midst of a magnificent season as he faces the fight of his life.

That life took a hard turn Memorial Day weekend last May, when he was playing in a tournament for his club team, Benfica USA, at the Mass Youth Soccer complex in Lancaster.

“He was just playing for the first 15 minutes of the game,’’ recalled his mother, Jennifer Chin. “Around that point, he got fouled and fell down on the ground. He got right back up, just like usual. When he went to play the ball for a free kick, he took two steps back, and right before he went to kick, he started twitching. He fell on the ground, unconscious, and went into a full body seizure.’’

It seemed like ages, she said, before the ambulance came.

He had suffered a heart attack. The loss of oxygen until medical attention arrived caused severe brain damage.

His teammates at Winchester, who had watched Moosavizadeh not only earn a spot on the varsity as a freshman but emerge as a starter by the end of the season, were shocked.

“I broke down. I threw my phone, just not knowing how to react to it,’’ said Winchester senior captain Kevin DeSa, who got the call in Florida, where he was playing in a tournament.

Svetiev stared at his phone for five minutes after receiving a text from Conor Calnan, a junior captain this season. “I couldn’t believe what I was seeing. It was heartbreaking,’’ said Svetiev. “I mean, a heart attack in a 15-year-old kid? It just goes to show that this stuff actually happens.’’

Doctors offered little hope, and the family agreed to take Milan off assisted breathing. His Sachem teammates went to Children’s Hospital to say their final goodbyes.

“When we stepped into the room and saw him there, everything was just silent,’’ said Brendan Doherty, a senior forward.

But as the hours, days, and weeks wore on, Milan kept fighting. He was breathing on his own, and after two months, he was transferred to Spaulding Rehabilitation Center.

The community rallied around the family, the support stunning. “We always had hope that he would keep fighting through,’’ said Milan’s 19-year-old brother, Shaundize, a sophomore at Newbury College in Boston. “But the doctors gave us the worst-case scenario, and we didn’t know what to expect. We just believed he would make it through.’’

Last week, Milan finally returned home, where he receives daily care from his mother, along with outpatient therapy. He can respond to his family, but they know he has a long and difficult recovery ahead. “He knew that he was home, he’s much better here, and he’s happy,’’ she said.

And while he continues his recovery, his family has asked that the community take something positive out of their son’s tragedy. “The whole point is that we want something like this to become a learning experience for kids and parents,’’ said his mother. “A lot of kids play these competitive sports, and parents should be asking these questions. ‘Does the team have a CPR-certified person? Is a defibrillator accessible?’ These are important questions for parents to ask.’’

The Sachems took the message to heart. Inspired by their teammate’s courageous battle, they started a fund-raiser, selling rubber bracelets — with Milan’s name attached — to help the school purchase a defibrillator. So far, they have raised close to $1,500. “We were all at a meeting, thinking of ways to come up with money for the team,’’ said DeSa. “Then I looked at my Livestrong bracelet. I thought we could make bracelets for Milan, and put the money toward supporting him. And it worked.’’

The project, according to Winchester athletic director Brian Carroll, is ongoing. “We plan to purchase [our] first defibrillator very soon,’’ he said. “We play at various sites around town, and want to take care of our junior high school and elementary schools, even the surrounding towns. This defibrillator will be the first of hopefully many. It’s the start of a tremendous project that has brought these kids and families together.’’

While their efforts off the field have been valiant, their play on the field has been stellar, all dedicated to Milan.

“When I saw him smile at Spaulding, it was a great feeling. It meant he was back. We didn’t really decide to dedicate the season [to Milan]; it just came naturally,’’ said Svetiev. “It was the right thing to do. Coming to practice every day and trying your hardest, giving your all and then some in every game, it’s because he’s a part of us. We didn’t have a choice in dedicating it to him.’’

Winchester coach Paul Austin said the tragedy has galvanized his team, 15-0-2 after last Wednesday’s 2-0 win over Burlington, securing at least a share of the Middlesex League title. “He was an extremely talented player and a great kid,’’ said the 11-year head coach. “Thankfully something positive has come out of it.These kids now really know what that family attitude means. They’re really brothers. No matter where they go, they’ll never be as close as they are to these guys.’’

Ryan Connelly, the team’s leading scorer (28 points) who has emerged as a true leader, and three senior classmates, Benjamin Bratt, Ben Davis and DeSa, have played together since they were kids. Sophomore midfielder Mark Greenblatt headlines a wave of young talent. “These kids have a lot pushing them,’’ said Austin.

“I think Milan has taught us to really appreciate what we have,’’ said Svetiev. “It’s taught us to realize that we have a really good shot at a state championship. Sometimes life is going to get in the way, but that makes this opportunity that much more valuable. Milan knows that first hand. He’s fighting for his life right now, but we appreciate this chance that much more because of him. . . . We have one chance at life and we dedicate this season to Milan for teaching us that.’’

Doug Saffir can be reached at dsaffir@globe.com.