On the North Shore it’s the season for picking beach plums, a tradition that bids a fond farewell to summer 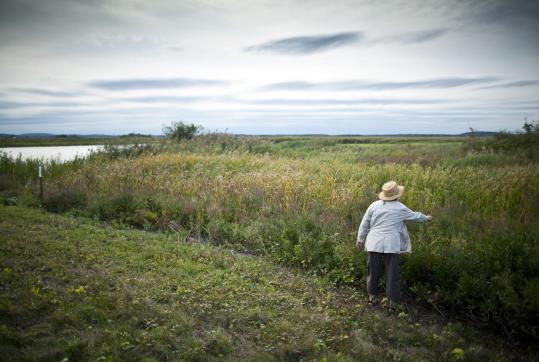 On Plum Island, Charlotte Dion of Ipswich picks beach plums. “There’s some kind of hunter-gatherer that comes out in me,’’ she says. (Photos By Sam Rosenholtz for The Boston Globe)
By G. Jeffrey MacDonald Globe Correspondent / October 3, 2010

NEWBURY — Hungry to eat more local food, Charlotte Dion of Ipswich recently found herself in the middle of a thicket — and loving every minute of it.

“There’s something really attractive about going out in the wild and finding something to eat,’’ said Dion from behind a leafy shrub. “There’s some kind of hunter-gatherer that comes out in me. Oh, look at these beauties!’’

For 50 area residents, plum-picking season began here Sept. 7 and goes until Oct. 31. Interest in this low-key, seasonal tradition soared in 2008 after a newspaper article drew attention to it. In response, the US Fish and Wildlife Service last year began requiring permits to pick and capped the number at 50 in order to ensure sufficient plum supplies for birds, deer, rabbits, and other wildlife who depend on it for sustenance.

“They need the berries a lot more than people do,’’ said refuge deputy manager Frank Drauszewski.

Now the plum-picking tradition rests for the moment with a few dozen people whose free permits allow them to harvest as much as one quart per day. (They may also gather up to one quart per day of wild cranberries). At that rate, one trip yields only enough plums for maybe one pint of jam, since the pits are large. But pickers don’t seem to mind coming back often.

“It gives me a sense of being in a place where this has been done for hundreds of years,’’ said Mary Herlihy of Byfield. “It feels very peaceful, like being one with nature.’’

Beach plums were once such a defining feature of the Northeast’s coastline that early explorers noted them in their journals. The species still thrives on Cape Cod and Martha’s Vineyard, but has become a rarity elsewhere. Beach plums are endangered in Maine, Pennsylvania, and Maryland, according to the US Department of Agriculture.

Famously unpredictable at harvest time, beach plum shrubs can produce a bounty one year and very little the next. This fickleness in the wild helps explain why they’re one of the last native North American fruits — along with the banana-like pawpaw in Appalachia — that haven’t been exploited for mass production, according to Tom Whitlow, a Cornell University horticulturalist.

This year, beach plums ripened early at Plum Island — so early that pickers were finding some overripe ones as soon as the Wildlife Service began issuing permits. But rather than lament the beach plum’s vagaries, pickers seem to delight in the variation they find in the absence of mass production.

“The flavors aren’t standardized,’’ said Erin Stack, a Newburyport artist who made her first plum-picking venture this year. “The plums taste a little different from one bush to the next. This is a flavor I wouldn’t find at Demoulas [supermarkets].’’

Beach plums bring a blend of flavors to many a recipe, from jams and jellies to chutneys and beach plum brandy, according to Elizabeth Post Mirel, author of “Plum Crazy: A Book About Beach Plums’’ (On Cape Publications, 2008). The art of cooking with them, she says, begins with selection in the plum patch. Jelly benefits from a lot of reddish plums, tart and rich in pectin, a substance that keeps the jelly from becoming too runny. Mix in a few riper purple ones for sweetness, and the result is a bold spread that’s rich in antioxidants.

A vibrant red spoonful of beach plum jelly with an English muffin is a seasonal treat not only its own right, Mirel says, but also in what it has represented for generations: good times by the beach as summer winds down.

“It has the color of a good red wine,’’ Mirel said. “The whole thing becomes extremely evocative. The taste brings an awareness of the summer. It’s a strong taste, it’s a strong color, and it’s a strong memory. So it all works together in a multisensory way to evoke nostalgia for the summer that is passing away and yet will come again and be wonderful.’’

At Plum Island, the plum-picking tradition is so low-profile that one would be hard-pressed to find beach plum jelly for sale anywhere nearby. Pickers find the practice serves a noncommercial but nonetheless enriching purpose in their busy lives. Stack’s husband, Mike Chesla, appreciates the opportunity to take a break from his work as a technical writer and spend an hour collecting wild fruits.

“We often engage nature as something visual, something you look at,’’ Chesla said as he filled his quart-sized container. “But this is encountering it on a whole different level. You’re ingesting it. It becomes part of you.’’