THIS STORY HAS BEEN FORMATTED FOR EASY PRINTING
Underground Railroad tour

On the road to freedom 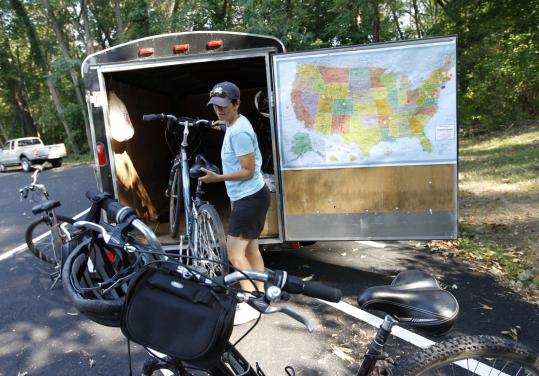 Sue Merlino takes bikes off a trailer at the parking lot of the North Bridge in Concord, where her cycling tour of local antislavery sites begins. (Joanne Rathe/Globe Staff)
By Nancy Shohet West Globe Correspondent / September 23, 2010

When Sue Merlino launched Concord Bike Tours in 2007, the idea of leading locals and tourists along the town’s historical highlights by bicycle seemed like a natural fit.

After all, Concord is the birthplace of the American Revolution and modern Transcendentalism: With the North Bridge, the Emerson House, Authors’ Ridge, and Meriam’s Corner laid out at her feet, what better way could there be to introduce Colonial history?

Then earlier this year, she began reading about the Drinking Gourd Project, a local nonprofit dedicated to raising awareness of Concord’s African-American and abolitionist history. Upon learning that the organization was putting together a list of historical sites that featured Concord’s abolitionist roots, Merlino approached the group with an idea: Why not design a bicycle tour to highlight those sites?

Liz Clayton, a charter member of the Drinking Gourd Project, immediately saw the advantage of Merlino’s proposition. “The sites are far enough apart that it’s just a lot easier to get to them all by bike than on foot,’’ Clayton said.

Over the summer, Clayton and Merlino began leading the abolitionist bike tours together. Merlino, a bicycle enthusiast and former preschool teacher, oversees the operational side as they ride, while Clayton provides most of the narrative when they stop.

“It excites me to see people interested in all this information and reacting to information about Underground Railroad sites, the first home sites of freed slaves, the story about their struggle for freedom,’’ Clayton said.

And the story of abolitionism aligns naturally with the more familiar Concord history, she pointed out. “We already know so much about Thoreau and Emerson and the Alcotts, but to understand the stance they took and even the risks they took in getting involved with the antislavery movement takes their history to a whole new level.’’

Meanwhile, Merlino discovered that even though she is a licensed Concord tour guide, there was a large piece of her town’s heritage that she didn’t know.

“I was surprised to learn that many of the Revolutionary War heroes owned slaves,’’ she said. “It turns out the earliest Colonists brought slaves north with them. And then as early as the 1800s, anti-slavery groups and the abolitionist movement started taking hold in town. Working with the Drinking Gourd Project has definitely shown me a different side of history.’’

The nonprofit gets its name from the song “Follow the Drinking Gourd,’’ which is commonly believed to have been sung along the Underground Railroad urging slaves to look for the Big Dipper and follow it north.

Among Concord’s better-known members of the antislavery movement was Susan Robbins Garrison, whose father, Caesar Robbins, was a freed slave who went on to fight in the Revolutionary War. The tour visits the house Robbins built for himself in 1780 as well as an area near Great Meadows where the town allowed former slaves to settle.

Tours pass the Unitarian Universalist church where Harriet Tubman spoke to the congregation and visit the Mary Rice House to learn about the schoolteacher whose home served as a station on the Underground Railroad.

Along the way, Merlino offers riders homemade pound cake similar to a confection that was made at Concord’s Black Horse Tavern during the 19th century by antislavery activist Mary Brooks, who sold pieces of her cake to raise funds for fleeing slaves.

Laurine Verrilli has lived in Concord for 17 years and always wanted to try a bike tour. When she heard about Merlino’s newest offering, she was finally motivated to get together a group of friends to take the tour last month.

“This was something I didn’t know about as far as the history of Concord,’’ Verrilli said. “In one sense, I was surprised by how many people in Concord helped slaves and harbored them in their homes, but I also realize it shouldn’t surprise me, given the personal philosophies of Thoreau, Emerson, and Alcott.’’

One of the first abolitionist bike tour groups included several children, and Merlino, a mother of two teenagers, was surprised at how engaged the children became in the story of Concord’s antislavery past.

“Mary Rice was a schoolteacher who had her kindergarten class write to Abraham Lincoln asking him to free enslaved children, and he wrote back to them,’’ Merlino said. “The kids were very interested in a copy we showed them of that letter.’’

Tours are three hours long and cost $55 for adults and $35 for children. Sue Merlino donates

20 percent of her profits to the Drinking Gourd Project.

For more information, go to www.concordbiketours.com