Pilgrims in the family tree

Descendants of the Mayflower’s passengers may be legion, but proving the lineage is no easy task 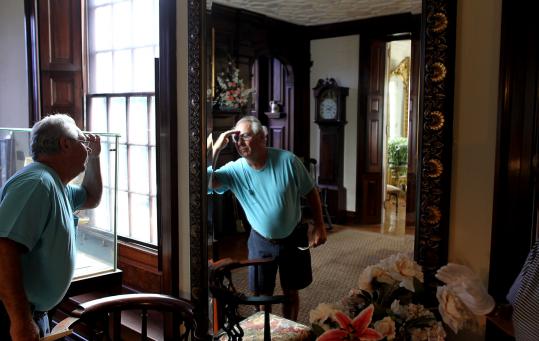 PLYMOUTH — What do John Adams, Marilyn Monroe, and Dan Quayle have in common? A bloodline flowing back to Mayflower passenger John Alden.

That young English barrel maker, according to Henry Wadsworth Longfellow’s poem, dared to vie with Myles Standish for the affection of young Priscilla Mullins. Alden prevailed, and the couple married and had 10 children.

Alden was among the 100 or so European men, women, and children who boarded the Mayflower bound for America in September 1620, but after the first winter only about 50 remained to face the New World. From that modest number came estimated millions who could claim a direct lineage to the Mayflower voyagers. Yet very few of those have assembled the irrefutable proof to join the official ranks of Pilgrim descendants.

The General Society of Mayflower Descendants, an organization whose mission is to “honor the memory of those who made that perilous voyage,’’ was chartered in Boston in 1897 and now had 52 chapters nationwide. Only those with Pilgrim blood ties are admitted as members. About 82,268 descendants have been documented in the 113 years since the society was established.

All chapters are overseen by the Plymouth chapter, headquartered on the grounds of the grand Mayflower Society House built by Edward Winslow in the 18th century and located a mere stone’s throw from Plymouth Rock and the Mayflower replica.

This weekend, governors and lieutenant governors from each chapter of the society are gathering in California for the annual meeting of the organization’s so-called board of assistants.

“This is the meeting where we deal with the nitty-gritty business of the society, and among that business will be how many new members we’ve had in the last year,’’ said the society’s historian general, Paul Bumpus, of Plymouth. “We generally have as many as 2,000 to 2,500 yearly’’ nationwide.

All those seeking membership into the society must first have their documentation approved by Bumpus. Currently, there are 28,000 documented, dues-paying Mayflower descendants, according to Bonnie Conant, who maintains the membership database.

Conant said the number of applications has soared since last February, when NBC’s “Who Do You Think You Are?’’ started backtracking through the bloodlines of celebrities like Susan Sarandon and Matthew Broderick. Watchers of the television program became interested in tracking their ancestry, and many hoped for a link to the Pilgrims.

“We were deluged with people asking for preliminary reviews,’’ Conant said. “People pay $20 to see if they have any legitimate claim.’’ She said the society scans its records, and if something surfaces, it’s up to the applicant to provide documentation for a final review.

“When you join the society, you pick a [Mayflower] passenger to join through,’’ Bumpus said, of the application process. Ancestry can be traced through sources such as birth, marriage, and death certificates, along with probate and land records, and census information.

“All applications for membership end up on my desk,’’ he said. “And not everybody who applies gains membership. You might try to prove your link circumstantially, and I may not agree with it. Sometimes I have to say, ‘This isn’t sufficiently proved.’ ’’

Shows like “Who Do You Think You Are?’’ tend to make such genealogical searches look deceptively easy. “They use the census to prove things on the show,’’ Bumpus said. But such proof would not be enough to support a claim to Pilgrim heritage. “The census is only useful as corroborative proof.’’

According to society librarian Carolyn Freeman Travers, the long paper trail may ultimately end in disappointment. “Membership can be really difficult, if not impossible,’’ she said.

Society member Caleb Johnson, a historian, developed a website called mayflowerhistory.com that may prove useful for some. On the website Johnson offers a sampling of famous Pilgrim descendants — including presidents, authors, and celebrities such as Monroe and magazine founder Hugh Hefner — as well as primary sources for genealogical searches.

So why do people go to the trouble of proving their Mayflower heritage?

“Sometimes they are just curious about what a great aunt may have told them,’’ Travers said. “But it may also be because people feel disconnected from their families. Maybe a parent has died.’’

Said Bumpus, “A large number want that certificate to put up on the wall.’’

There are other perks. Members receive the Mayflower Quarterly, a small magazine that discusses issues and events both nationally and in the state societies, free use of the society’s genealogical library in Plymouth, and invitations to annual meetings. Members may also attend the very popular national Congress, held every three years at the Mayflower Society House.

The best perk for members may be that their family’s documentation, once submitted to confirm the Mayflower link, is kept safely tucked away in a fireproof vault on the society’s property, so that generations of future descendants can quickly establish membership to the group.

When such information was pulled recently for one applicant, a photo of her great-grandparents was among the documentation in the vault. “It can be very emotional,’’ Bumpus said. “That woman had never seen the picture before. She cried.’’

For some Mayflower descendants, the trip to the Mayflower Society House is a pilgrimage. “We’ve had people sail into the harbor,’’ Bumpus said. “One couple sailed up the coast from the Carolinas. The whole idea of sailing into Plymouth Harbor was big for them.’’

Up until last January, Mayflower descendants tracked their ties solely to the Mayflower’s male passengers. Bumpus changed that so lineage can now be claimed through the Mayflower’s women and children, too. The main impact is on how many passengers can be claimed as forebears, since Pilgrims and their descendants intermarried, often creating complex family trees. Bumpus, for example, has 35 Mayflower passengers in his lineage.

While the expansion of passengers was well-received, a few questioned the inclusion of Peregrine White, who was born on the Mayflower in November 1620, when the vessel was moored in Provincetown harbor.

For more information on the General Society of Mayflower Descendants, go to www.themayflowersociety.com.