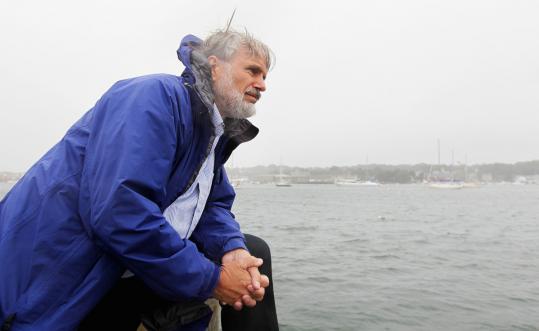 Author John N. Morris’s grandfather lost his life in 1935 while working as a doryman out of Gloucester. (Wendy Maeda/Globe Staff)
By Joel Brown Globe Correspondent / September 2, 2010

GLOUCESTER — On March 7, 1935, two men trawling for halibut from a Gloucester schooner off Newfoundland disappeared from their overturned dory and were presumed drowned. The deaths of Charles Daley and Stephen Olsson were unremarkable, except that they were among the last of their kind. Their families mourned and then turned to the task of surviving without them. Within a few years, dory fishing was no longer.

Because of what happened to Daley and Olsson, the history of the fishery survives in a rich new telling, “Alone at Sea: Gloucester in the Age of the Dorymen (1623-1939),’’ written by Olsson’s grandson, John N. Morris.

Morris was born in 1941 in East Gloucester and grew up in the Riverdale neighborhood. His father cut fish for a living; his mother packed it in boxes. From his mother and aunts, he heard stories about his grandfather. Now a gerontologist and director emeritus of the Institute for Aging Research at Hebrew Senior Life in Boston, he lives in Tyngsborough, far from the docks. But in 1999, he was poking around online for information about the Gloucester fishery and came across a message from the grandson of Carl Olsen, the captain of the Oretha F. Spinney, the schooner on which Daley and Olsson took their fateful sail.

They eventually connected via e-mail. It turned out Captain Olsen’s teenage son, Einar, had sailed on the Spinney one summer with Daley and Olsson. Einar learned to fish and worked hard, but as a sort of intern would get only a fraction of the money the dorymen would receive at the end of the trip. “My grandfather went to [the captain] and said, ‘Your son deserves a full share,’ ’’ Morris, 68, said one recent afternoon in a booth at the Gloucester House restaurant. Einar got his money, and he never forgot Steve Olsson. Eventually he named his son after the lost doryman.

It was that son, Stephen Olsen, who told Morris: “My father thought that your grandfather was the best man he had ever met in his life,’’ Morris recalled.

That moment sparked a decade’s quest for Morris, who reached out to the Daley and Olsen families and others, and spent many hours poring over old newspapers and historical records, as well as interviewing his own family and even the last surviving dorymen. The result is “Alone At Sea,’’ a 448-page chronicle of the fishing industry published by Commonwealth Editions of Beverly. Morris weaves political, social, and economic trends with the stories of the fishermen and their work to paint a vivid picture of a way of life.

Although his book covers the gamut of the industry, the focus is on dorymen. A schooner would sail to fishing grounds where it set out up to 14 two-man dories “over many miles of open ocean,’’ Morris writes. “Each dory laid long ground lines containing hundreds of baited hooks on the seabed below. On a good day, a dory could land upwards of 1,000 to 2,000 pounds of cod, haddock, hake, or halibut.’’

The downside was that with small boats, tragedy was inevitable, whether from storms, getting lost in fog, or problems getting the catch into the boat. Many fathers and husbands and breadwinners were added to the rolls of Gloucestermen lost at sea.

Long before “The Perfect Storm’’ became a Hollywood hit, the Oretha F. Spinney was purchased by MGM and used in the 1937 movie “Captains Courageous,’’ starring Spencer Tracy.

Outside the restaurant, trawlers bobbed at the docks under a drizzly, gray sky. Morris said the hardship of the dorymen is paralleled in the lives of today’s fishermen, their ability to make a living threatened by falling fish stocks and ever-tightening government regulations.

“What strikes me now more than anything else is, although we have a concern for the fish that are out there, we don’t have a concern for this over 300-year tradition of independent fishermen that have carried this work forward,’’ Morris said. “This is a resource as well, and to lose this would almost be a national shame.’’

No surprise his book is finding itself in the cabins of today’s fishing boats.

Fred Buck, photo archivist at Cape Ann Museum, helped Morris in his research. Buck says his son-in-law is a fisherman who already has survived one sinking that took the life of a crewmate.

“John signed a copy of the book for him, and he took it to read on his last trip,’’ Buck recounted in an e-mail. “Shawn left it in the pilot house so he could read it when he was on watch, and he said the entire crew read it over the course of the three weeks they were out trawling. That says something to me about the value of that work, when it speaks directly to the men still fishing, against growing odds, out of the port of Gloucester.’’

Morris will lecture Saturday at 11:30 a.m. and 2 p.m., and will be on hand from 11 a.m. to 3 p.m. to sign books and visit. www.- gloucestermaritimecenter.org. Joel Brown can be reached at jbnbpt@gmail.com.