At 100, Scouts honor code and spread the word

Local troops reach out to urban youths to boost membership 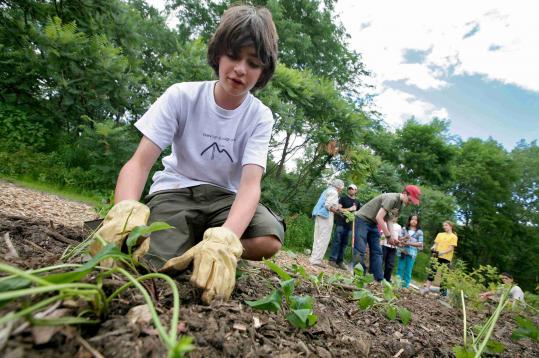 Tim Schoch can make a bonfire as well as the next Boy Scout. But for his latest achievement badge, the 13-year-old opted to play the cello for residents of an assisted-living complex near his hometown of Lexington.

“My grandfather, and uncles, and cousins, a lot of them were Eagle Scouts,’’ said Schoch, a decorated member of Troop 119. “Eventually I will be. It means a lot to me because my family has a long tradition of being in Scouts.’’

Many Scouts, including Schoch, across the country are preparing for the jamboree of jamborees — the 100th birthday of the Boy Scouts of America, kicking off with a parade Sunday in Washington, D.C.

“It’s become a reawakening of awareness about a pretty vital community group,’’ said Dennis Prefontaine, scout executive of the Framingham-based Knox Trail Council, which oversees troops in 21 communities across the region. “Locally, a lot of troops are doing community-service projects, rededication ceremonies. We’re finding out, again, what scouting is like in a community like Ashland, or Holliston.’’

At the same time, local Boy Scouts are working to promote their traditions among members of the next generation.

The Boy Scouts of America has seen its membership dip by about a half million over the past decade, from around 3.3 million in 1998 to 2.7 million last year. The numbers encompass participants across the organization, from Cub Scouts to the coed Venturing program for teens.

“This may be an oversimplification, but the decline is mostly in Cub Scouting, not Boy Scouting,’’ said Prefontaine. “The reason for that, I think, is that we are in huge competition for kids’ time at 7, 8, 9, and 10 years old. It’s computers, it’s soccer, it’s all the activities kids can do.’’

Locally, troops seeking members are reaching out to youths in urban areas, boosting the number of available scholarships to help pay for membership costs, and even bringing tried-and-true Boy Scouts activities a bit more up to date.

Sure, they still learn how to build fires, but troops like those under the Worcester-based Mohegan Council, which oversees Upton, among other area towns, are finding that the Internet, GPS, and other technology can come into play.

“You use the traditional stuff but we also use modern technology to tie into that,’’ said Stephen Sycks, vice president of programming for the Mohegan Council and chairman of its centennial programs. “It’s still backpacking and trekking and that type of stuff, and you can bring the GPS. But boy, you ought to learn to do it without the GPS.’’

In recent years, the national organization has drawn criticism for excluding atheists and agnostics from membership, and for barring people known to be gay from leadership and paid positions.

Prefontaine said he has never seen any direct fallout from the policies in his member base, and said he has never denied anyone a position, or fired anyone, based on religious beliefs or gender orientation. He said membership in the Knox Trail Council has remained steady, with between 6,900 and 7,000 Scouts enrolled for the last two years.

“People want to have kids in the program because of our values, or they don’t because they don’t agree with those values,’’ Prefontaine said. “People vote with their feet. But in my case, my membership is stable.’’

Last year, the Mohegan Council had 4,129 Scouts, an increase of 5 percent from the year before, Sycks said, and he could not track a relationship between the politics of inclusion and membership.

“We’re bucking that national trend,’’ Sycks said of his group’s growth. “We’ve thought about this for a number of years, and the answer is: Provide a quality program and they will come.’’

Political issues seem remote to the members of Troop 119 in Lexington. Scoutmaster Bernie Gunther said that 10 of the 80 youths in the troop are preparing to go to the nation’s capital for the organization’s centennial National Jamboree.

Schoch has already completed the requirements for a special centennial achievement badge: the Year of Celebration patch. He earned the five ribbons that make up the award by committing himself to acts of service, personal achievement, character building, outdoors skills, and leadership. One of his projects was to write a report on a former Lexington Scout leader whom he found inspirational.

On his path to the merit badge, Gunther said, Schoch knocked off the requirements quickly and efficiently. “He was so excited about this.’’

On July 4, the Scouts capped off their spring season by running a hot dog and hamburger stand in Dean Park as a fund-raiser for the fall, when Troop 114 expects to graduate its 100th Eagle Scout.

In Medfield, members of Troop 89 last month planted 30 trees along a stretch of Route 27 that borders the town landfill.

As part of the 100 hours of community service that unit commissioner Jerry Kazanjian said makes up the Medfield troop’s anniversary year, the Scouts also cleaned up the property around the historic Dwight-Derby House.

“Scouting is alive and well here in Medfield,’’ Kazanjian said.

The Boston Minuteman Council, whose territory extends into a number of area communities, including Arlington, Lexington, and Concord, recently hosted Adventure Base 100 at City Hall Plaza. The hands-on event, traveling the country to promote scouting, was held as part of Boston’s annual Harborfest celebrations for the Fourth of July.

In Upton, according to Troop 132 scoutmaster Bill Andrews, 100th anniversary observances have included the recognition and reuniting of the town’s Eagle Scouts. The troop also devoted time to the town’s 275th anniversary by building a float for the parade. Last month, they put up a kid-friendly rope bridge.

Although the centennial is partly about looking back, Upton troop member Tony Arrigo, 12, took a moment to think about the future of scouting. One thing he’d change, he said, is the economics of participation.

“Some troops cost money,’’ Arrigo said, adding that while financial aid is typically available and confidentially handled, “I’d like to see it become easier for other kids to enjoy scouting.’’

“What kills you is equipment’’ said Andrews, who works every year to create scholarships and access to handed-down equipment. “You can easily spend several hundred dollars equipping a kid.’’ The price of scouting varies according to the activities conducted by a troop. While local and national registration can total as little as $40, the gear for overnight hikes can extend to boots and backpacks costing more than $100.

Sycks agreed that expanding access to scouting is a major goal for the organization.

“The next step in scouting is really urban outreach,’’ he said. “To bring in kids regardless of means, youth of all economic means. We’re using the centennial as a springboard — for youth leaders, and for scouting alumnae — to get back into scouting.’’