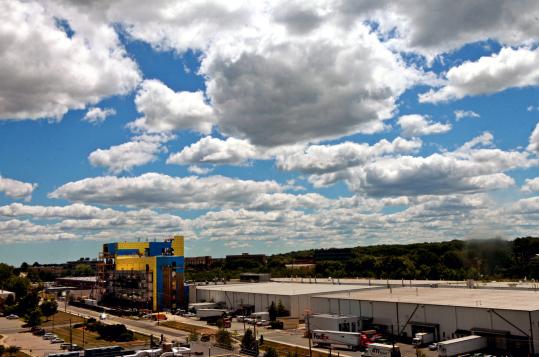 Genzyme’s new drug plant, seen from another building. The expansion is expected to bring hundreds of new jobs to Framingham. (Photos By Michele Mcdonald for The Boston Globe)
By Scott Van Voorhis Globe Correspondent / July 11, 2010

Genzyme Corp. envisions a near-doubling of its Framingham campus in a major expansion that could have far-reaching ramifications for both the town and the western suburbs.

The Cambridge-based biotechnology firm has filed a master plan with state environmental officials laying out an expansion of its Framingham site over the next decade to nearly 2 million square feet.

Genzyme’s sweeping proposal, in turn, has the potential to spark a manufacturing revival in a town still proud of its industrial heritage, while further fueling the rapid growth of the life sciences industry in the western suburbs, according to a key local business group.

For Framingham, that could mean hundreds of new jobs, including now increasingly rare manufacturing positions, as well as millions of dollars in new tax revenue, say company and town officials.

But the growth is also likely to bring some challenges as well, including more traffic on already clogged local roadways, according to documents filed this spring with state environmental regulators. The biotech company will also have to win state approval for its master plan as well as town approval for individual projects.

“I think it’s important to note that it is still a manufacturing facility; it’s not just R&D that is to be done there,’’ said Bonnie Biocchi, chief executive of the MetroWest Chamber of Commerce. “Over the past two or three decades, we have seen a lot of manufacturing go to other parts of the globe.’’

Over the next decade, Genzyme plans to add 757,000 square feet of manufacturing, office, and research space to its Framingham campus, according to plans filed with the state Executive Office of Energy and Environmental Affairs.

That expansion would come after a drug production plant and quality-control lab the company is opening next year.

Genzyme is the fourth largest taxpayer in Framingham, paying out $2.1 million a year to the town in property and other taxes, said Daniel Dargon, chief assessor for Framingham.

The expansion would likely boost those tax payments by at least another $1 million per year, he said. As it stands now, only Shoppers World, Staples, and Bose pay more.

“It’s an opportunity to increase both the revenue for the town as well as job opportunities for our residents,’’ said Framingham Selectman Jason Smith.

But along with taxes, Framingham can also expect to see more jobs, including some in the hard-hit manufacturing sector. In a first big step, Genzyme is building a new $300 million manufacturing complex in Framingham.

The biotech company is betting on the 50,000-square-foot plant, on track to open next year after the Food and Drug Administration completes its reviews, to help it overcome a production bottleneck that created one of the worst crises in the company’s history.

The Framingham plant will initially produce Fabrazyme after it opens next year, followed by Cerezyme in 2012. Fabrazyme treats Fabry disease, an inherited disorder, while Cerezyme helps combat Gaucher disease, which can result in liver and neurological damage.

The decision to build a new plant in Framingham is being welcomed by local business leaders, who have campaigned for years to bring back manufacturing jobs.

Genzyme plans to hire as many as 600 workers for its new drug plant, with at least 1,000 new workers brought on board by the time the expansion is complete, said Henry Fitzgerald, vice president of facility operations.

“General Motors was a huge employer,’’ Biocchi noted of the now long-gone mainstay of the town’s manufacturing base. Framingham “took a big hit when that manufacturing facility went out. New industries and niche manufacturers are coming to the area.’’

In addition, Genzyme’s master plan, now under review by state environmental regulators, calls for another 400,000 square feet of research-related space in a section of the campus called the Science/Technology Development Block. These projects are slated for construction between 2015 and 2018.

The biotech company also expects to develop another large block of manufacturing, office, and parking space as well, which could see another 360,000 square feet built starting in mid-decade.

The planning, while still in its early stages, provides a good rough road map for Genzyme’s future intentions in Framingham, Fitzgerald said.

The company’s expansion, in turn, is not likely to be a solo act, either.

Given the size of plans under consideration, Genzyme’s construction of a new drug plant and research facilities is likely to act as a magnet, said Biocchi, who worked in economic development for the state until she took over as chamber chief executive this spring.

Not only will it act as a beacon for other biotech companies, but Genzyme’s expansion will also attract smaller firms that fill specific niches, such as equipment suppliers, she said.

In fact, Genzyme is already attracting smaller firms to the Framingham area, including the French firm Cytoo, which recently set up shop in town in order to do business with the biotech company, Windham-Bannister said.

Genzyme’s expansion is also being greeted enthusiastically by Framingham State College, which hopes to create an internship program for its students at the biotech company.

There are already close ties with the company — Genzyme has a representative on a regional task force based at the college looking at ways to beef up training in the sciences and mathematics at local schools. A Genzyme employee is also president of the school’s alumni association, while another sits on the college’s board of trustees.

“We are certainly hoping to expand our relationship,’’ said Ellen Zimmerman, dean of academic affairs at Framingham State.

Still, Genzyme’s growth will also bring some headaches, with the number of cars and other vehicles pulling in and out of its facilities off Route 9 expected to skyrocket.

The impact on other nearby roadways, including Route 30, could prove substantial.

The number of car and truck trips in and out of Genzyme’s campus each day could jump to 16,350, up from 9,250 now, according to the company’s proposed master plan.

In order to deal with the increased traffic, company officials are looking at plans to improve nearby intersections and even build a flyover ramp from Route 9 directly into the campus, Fitzgerald said.

That would likely require state support, he added. If so, it would not be the first time Genzyme has reached out to state government.

In a move that set the stage for the current expansion, the Massachusetts Life Sciences Center committed nearly $13 million to upgrade wastewater treatment facilities around Genzyme’s Framingham campus.

Meanwhile, there are also plans to raze a number of buildings to make way for new ones, and relocate a stream that runs through the center of the campus to its outer border.

“It’s a big change, and there will be varied impacts on different things,’’ Fitzgerald said.

Genzyme’s plans
for expanding
in Framingham
Opening in 2011:
►A $300 million, 55,000-square-foot plant that will produce Fabrazyme, a drug that treats Fabry disease, and Cerezyme, which helps combat Gaucher disease.
►A six-story, 185,000-square-foot quality-control lab that will support the drug manufacturing plant.
Envisioned over the next decade:
►An additional 400,000 square feet of research-related space in a section of the campus called the Science/Technology Development Block. Construction would begin between 2015 and 2018.
►Another 360,000 square feet of manufacturing, office, and parking; construction would start mid-decade.
Source: Genzyme Corp.