Strike up the band 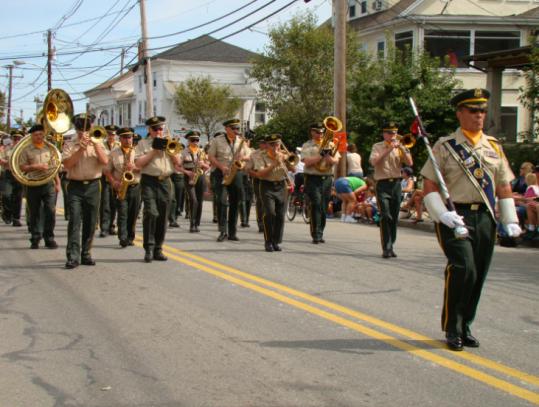 Growing up in Natick, baritone horn player Tim Curtin watched the band representing Waltham’s American Legion Post 156 march in his town’s Fourth of July parade each year. After learning from a fellow musician that participation isn’t limited to veterans, he joined in 1989.

Now a West Newton resident and president of the Waltham post’s band, Curtin has performed with the all-volunteer ensemble in the former Soviet Union, England, and Germany, as well as Hawaii, Florida, Indianapolis, Reno, and Pittsburgh. In celebration of Independence Day, the band will march in parades on July 4 in Wakefield, and on July 5 in Natick and Franklin.

Through a fund-raising campaign, the band has collected approximately $15,000 toward the $50,000 required to replace its 20-year-old uniforms, with donors including the Music Drives Us Foundation launched by Ernie Boch Jr., and the American Legion’s statewide organization. The band has about 40 members, hailing from Massachusetts, New Hampshire, and Rhode Island and ranging in age from their teens to 84 years old.

Auditions are not required, Curtin said, and new members are always welcome. The band performs in more than 30 parades and concerts each year, with rehearsals on Mondays from 7 to 9 p.m. at Post 156, 215 Waverley Oaks Road in Waltham.

“We come from many different backgrounds, but we all share a love of music and appreciation of friendship,’’ he said. “The band is my second family.’’

For more information, go to www.walthamlegionband.org.

CELLO MASTER: Sebastian Bäverstam of Newton was only 3 years old when he asked his mother for a cello. Now 21, he is an international prize-winning musician who is celebrating the release of the first CD featuring his playing.

A dual citizen of the United States and Sweden, Bäverstam performs on “Jupiter Duo,’’ by Boston composer-pianist Alla Elana Cohen. While Bäverstam is studying under Swampscott resident Paul Katz at the New England Conservatory in Boston, the CD marks a decade of collaboration with Cohen.

“She’s been a real mentor to me,’’ Bäverstam said. “There’s something about working with Alla that feels very liberating. The music flows naturally. If I’m having trouble with another piece I’m working on, I think about that feeling and try to get back to it.’’

Bäverstam was only 10 years old when Cohen invited him to perform a work by one of her New England Conservatory Preparatory School composition students at its Festival of Contemporary Music.

“From the very beginning of our first collaboration, Sebastian has displayed a clear understanding of my music and an intuitive feeling for how to perform it,’’ said Cohen, a native of Russia who is also on the faculty at the Berklee College of Music. “He has inspired me to compose a whole library of works for cello and piano, and for cello solo.’’

Bäverstam won the prestigious Concert Artists Guild International Competition last year. In 2006, he won the Boston Symphony Orchestra Concerto Competition, and was the winner for contemporary interpretation at the Johansen International Competition for Young String Players in Washington, D.C. He performed a recital at Carnegie Hall at 14, and has appeared multiple times on the PBS radio and television program “From the Top,’’ in a PBS documentary filmed in Carnegie Hall, and in a commercial for Bose speakers.

For more information about “Jupiter Duo,’’ go to www.allacohen.com or www.digstation.com/AllaElanaCohen.

FULBRIGHT HONORS: Emily Šaras of Hopedale is one of five recent Wellesley College graduates recognized by the Fulbright Program. Sponsored by the US Department of State, the Fulbright Program gives students, scholars, and professionals the opportunity for international research and teaching.

Šaras has been awarded a Fulbright grant to study music in Vilnius, Lithuania. A major in anthropology and music, she will study voice performance at the Lithuanian Academy of Music and Theatre while researching the country’s public performances of folk music and dance.

Malina Dumas of New Sharon, Maine, has been awarded a Fulbright grant to study issues of human trafficking in Moldova. Olinda Hassan of Tucson, Ariz., and Beilin Ye of Chicago won Fulbright assistantships to teach English in Bangladesh and South Korea, respectively. Victoria Charoonratana of Alta Loma, Calif., has been named an alternate for an English assistantship in Thailand.

At Wellesley, Šaras performed with the College Choir, Chamber Singers, and Chamber Music Society, and was founder and president of Anthrophilia, a student anthropology club. An opera singer, she said she is fortunate to be combining her passions in anthropology and music with her Lithuanian heritage.

“I’m so pumped, because this is my dream project,’’ said Šaras, who received the Billings Performance Prize in Music at Wellesley’s commencement last month. “The job market is crazy and I’m young, so it seems like a good time go for what I really love and see if it works out.’’

Šaras will blog about her Fulbright experience at www.dainosfieldnotes.com. She plans to pursue a master’s degree in music at Johns Hopkins University’s Peabody Institute in Baltimore.

The scholarship program is part of the StageSource Education Initiative, which supports area students pursuing an interest in theater. Applicants are evaluated for artistic and intellectual achievements, excellence of character, and focus and commitment to theater.

Each award includes a $500 prize and a one-year StageSource membership.

SILVER ANNIVERSARY: Anne Reenstierna recently celebrated her 25th anniversary as head of school and 35th year overall at the Brimmer and May School in Chestnut Hill.

She joined Brimmer and May as an English teacher in 1974, and was appointed head of the English department the following year. After receiving a master’s degree in psychology and counseling from Lesley College in 1979, Reenstierna worked as the school counselor while teaching English. She became director of admissions in 1980, and was named head of school in 1985.

Longtime Newton residents, she and her husband, Eric Reenstierna, now reside on the school’s campus, in the Brookline section of Chestnut Hill.

People items may be submitted to Cindy Cantrell at cantrell@ globe.com.