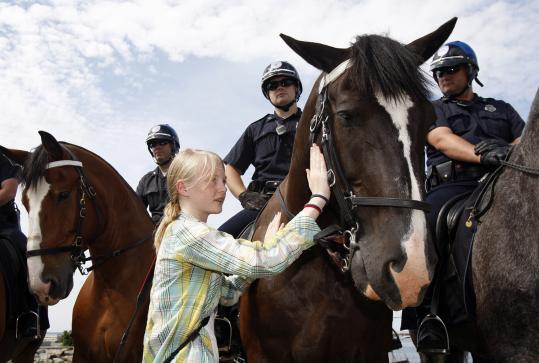 Elise Jacobsen, 12, pets Camden with Patrolman Adam Larsen aboard. At left is Chopper, with Dennis Ward, and to the right, Raymond Reid on Pelli. (Steve Haine for The Boston Globe)
By Christine Legere Globe Correspondent / June 27, 2010

Y ou could call it trial by fireworks.

On Saturday, four Plymouth police officers will oversee White Horse Beach’s annual bonfire bash from the backs of heavily muscled draft horses that used to patrol the streets of Boston.

The newly trained mounted unit will be making its debut during the notoriously raucous July 3 beach event in south Plymouth, where the drinking can get heavy and random rockets can fly off unexpectedly.

The mounted police will have a view of the action from about 10 feet up, giving them the jump on problems that are developing. And there will be plenty of backup support on the ground from the local police and Plymouth County Sheriff’s Department personnel to help settle disputes or make arrests. Meanwhile, mounted officers can help keep crowds back if trouble begins.

Then on Sunday, the mounted police are slated to patrol the downtown and waterfront for the July Fourth parade and evening fireworks, as tens of thousands pack the streets of America’s Hometown.

At the moment, the five horses in the Plymouth Police Department’s mounted unit are more seasoned than their riders.

The 1,800-pound mounts have been trained for years to keep their cool during celebrations and riots, even with planes overhead, emergency sirens, honking cabs, shouts, unruly crowds, or the randomly tossed bottle. But last July, the mounts were sent south to Plymouth County Farm when the financially beleaguered city of Boston discontinued its mounted patrols.

The ancestry of Chopper, Shorty, Pelli, Clancy, and Camden can be traced back to the mighty battle mounts called Percherons, bred by the French in the Middle Ages; to the 300-year-old Scottish Clydesdales; and to the heavily muscled English Shire draft horses. All of those breeds were known for their strength, agility, and docile dispositions.

Since last July, these horses have enjoyed a far less demanding lifestyle, although officers in the Plymouth County Sheriff’s Department have, at times, used them to help patrol events in Provincetown, Halloween in Salem, and some festivals in Wareham.

A few months ago, Plymouth Police Chief Michael Botieri and Plymouth County Sheriff Joe McDonald discussed the possibility of establishing a mounted unit consisting of local police. The unit would keep the horses’ skills sharp, while offering a valuable service to the town. “The police department’s reaction was enthusiastic,’’ McDonald said.

Botieri commented it would normally be too expensive to add another component to the town’s police service, but this was being offered free of charge.

“There will be no cost to the town at all,’’ Botieri said. “We had 12 officers apply and we chose four. They have been training for a few months now, and they will continue right through the summer and do some on-the-job training.’’

Plymouth officers Stephen McLaughlin, Adam Larsen, Raymond Reid, and Dennis Ward were selected for the mounted unit. Only Reid had experience, as a horse owner himself and former member of the Plymouth County Sheriff Department’s mounted unit.

Reid said he jumped at the chance to ride for the Plymouth Police Department. “It is a great opportunity for us,’’ he said. The other three applied for the unit because it offered a change of pace.

When the training began, the lessons were basic. “The first thing they had to do was learn to ride,’’ said Captain Dan Callahan, who heads the Plymouth County Sheriff’s mounted unit and manages the stables at the county farm. Callahan and other handlers in the Sheriff’s Department worked with the newcomers. “They’ve all conquered riding with no incidents,’’ Callahan said.

That was a small but necessary first step. “It’s a completely different world to be doing police work on horseback,’’ Callahan said. “We’re doing a 10-week training program. At the start, the police would come and train once or twice a week. Lately, it’s four times a week.’’

The Plymouth officers and their horses have also trained at White Horse Beach and in the downtown and waterfront. “The horses are exposed to what you hope will be more extreme than anything they will run into,’’ Callahan said. “Going through the sand is something I would assume they hadn’t done much of before. And I doubt they have seen much salt water.’’

Trainers also brought in smoke machines, lighted bonfires, and set off fireworks to get the horses accustomed to the sights and sounds of a typical July Fourth celebration.

McLaughlin said he has become comfortable riding any of the Boston mounts being used by the local department, and he’s looking forward to Saturday.

“I’ve been dealing with crowds on beaches for the last 20 years, but this is the first time on a horse,’’ McLaughlin said. “I think we’ll do well.’’

The horses will give officers more mobility at White Horse and on July Fourth, Chief Botieri said. “The crowds during the fireworks make it hard to move around,’’ he said. “We’ll be using bikes, motorcycles, and the mounted unit.’’

After the weekend, the mounted unit will be assigned to special events in the downtown and waterfront and out at Morton Park, Botieri said. “This won’t be something you’ll see out every night,’’ he said. “It will be event-specific.’’

One thing is certain: The mounted unit always draws a lot of interest from the public. A recent training session on the waterfront turned into a photo-op for tourists. Crowds gathered around the riders with lots of questions.

“They’re gorgeous,’’ Linda Stavlo, a Kansas resident touring the area with her sister said of the horses. “We were raised with horses,’’ Stavlo said. “And I’ve actually helped train horses in Kansas. This made my whole trip.’’

Sheriff McDonald said he’s not surprised at the stir Plymouth’s new mounted unit is causing. It’s one of just a couple left in Massachusetts. “I suspect they’ll end up in every tourist’s photo album.’’