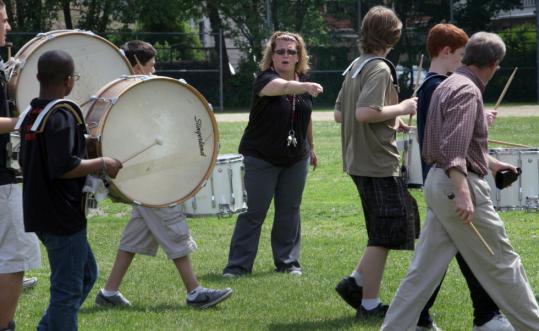 Whether it’s marching band, jazz, choir, or music theory, if you offer it they will play.

At least that’s the experience in the Belmont school district, which was recently named one of the country’s Best Communities for Music Education, along with public schools in Weston, Westborough, Wayland, and the Benjamin Franklin Classical Charter Public School in Franklin.

While athletic and academic prowess usually get the most attention, music provides a different method of learning — fostering creativity, innovation, and teamwork toward a common goal, supporters say.

“It’s through music and the arts that we tell the human story,’’ said Bill Pappazisis, the fine and performing arts director for the Belmont schools.

The National Association of Music Merchants surveyed teachers and administrators to distinguish 174 districts and schools in 30 states. Each school was selected based on criteria including funding, the amount of staff and their credentials, student participation and career paths, curriculum, facilities, and public support.

Nearly all of the districts require students to participate in some sort of music curriculum during their school career.

“Our philosophy is basically: Music is for everybody,’’ said Chris Memoli, the Weston school district’s director of music. “It’s not an elite thing.’’

The accolade is particularly pertinent now, as tight finances prompt districts to clamp down on budgets and make sacrifices.

In Wayland, a $150 instrument fee for elementary school students has offset costs by $52,500 over the last four years, according to district figures.

Belmont also recently implemented participation fees ranging from $175 to $275 for extracurricular activities, according to Pappazisis. Such fees, he said, “aren’t something that schools are very proud of, but it is certainly a way that we have been able to maintain programs.’’

Meanwhile, many schools rely on parent and community organizations, such as the Creative Arts Parents Association in Wayland, explained Susan Memoli, the district’s director of fine arts, and Chris Memoli’s wife.

As administrators noted, a kaleidoscope of factors make a program successful, not the least of which is community backing.

“The community just really values the arts,’’ she said, which she attributes largely to the “great number of professional musicians and artists here. It’s really created a climate and a culture. There would clearly be a community uproar if these were threatened.’’

The Wayland district’s offerings include band, orchestra, and chorus beginning at the elementary school, and, at the high school, two jazz bands and an a cappella group, as well as courses on music theory and history.

Claire Sehringer’s children have been involved with nearly all of them.

“Learning an instrument is one of those long-term lessons that sometimes in today’s world we forget about,’’ Sehringer said. “It’s not just about you playing as loud as you can. You have to blend with other people, follow directions.’’

In Weston, a lifelong appreciation of the arts is cultivated through orchestra, band, and chorus beginning at the elementary school; at the high school, students can take part in jazz choir, two bands, two choruses, and two jazz bands, as well as Advanced Placement music theory and chamber music courses.

Belmont offers a similar panoply: orchestral string and band programs starting in the elementary grades; at the high school, an AP music theory class, courses on composition, music technology and the history of popular music, and after-school programs in jazz, jazz choir, jazz ensemble, chamber orchestra, and marching band, among others.

At Belmont High, 85 percent of the students take at least two years in music or art, Pappazisis said.

In Weston, the participation rate is 80 percent in the elementary and middle schools, and over 50 percent at the high school.

Numbers are similar at Wayland High, where more than half of the students take part in music, art, or drama, Susan Memoli estimated.

But then there are the students who go beyond, earning seats in the All-State Music Festival and at district events through the Mass. Music Educators Association. Nearly all of the recognized schools have placed; Belmont, for its part, sent 20 students to All-State this year, 50 to districts, and five to the American Choral Directors Association National High School Honors Choir, according to Pappazisis.

For many, the love of music doesn’t stop in high school.

After his time playing violin in Weston, where he went on to All-State, districts, and on a tour with American Music Abroad, Cody Wood graduated from Case Western Reserve University in Cleveland, and now plays gigs and seeks out acting roles in Los Angeles.

It’s also been a journey for Jacob Klapholz, another Weston graduate.

After playing violin and trumpet in Weston, he’s a sophomore at Brown University concentrating in music; he plays in university’s orchestra, and even started his own brass quintet.

“Music has brought me some of my closest friends and flown me across the world,’’ Klapholz said. “I simply cannot imagine life without it.’’