Too many families left begging for a cure 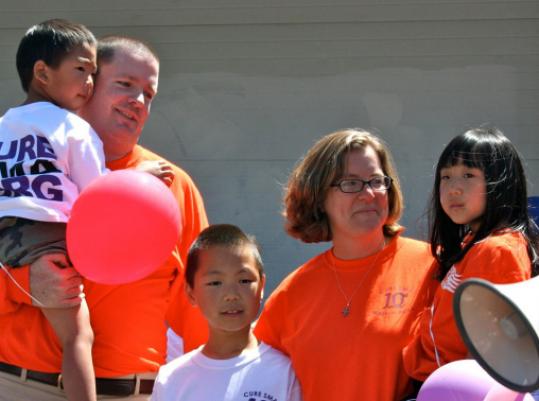 Cianan Murphy’s hair was more blond than his sister Cecilia’s, but they both had big bright eyes and even bigger smiles. He lived to be 11 months old. Cecilia, the second child of Silvia and Brian Murphy, celebrated her first birthday, and died two months later.

Both were born with spinal muscular atrophy, the number one genetic killer of children under age 2.

SMA is a vicious enemy. It destroys muscles so that children lose their ability to walk, crawl, sit up, hold up their heads, swallow. There are four types. Children with Type 1 generally die before their second birthday. It is a disease we should be fighting the way we fight our wars, with money and resources and unerring determination.

But the big money and resources in this country are spent destroying foreign enemies, not medical ones. So parents whose children are born with SMA or Duchenne muscular dystrophy or fragile X syndrome or cystic fibrosis, or whose children contract a disease — cancer, diabetes — must become teachers and beggars if they want to help.

Begging comes next: fund-raisers, the walks we have and the runs and relays and fashions shows and brunches and dinners and golf tournaments and raffles and auctions. They are all supplications. Help us. Help my friend. Help my brother. Help my child.

And many people do. Today is NStar’s Walk for Children’s Hospital Boston. Next week there’s a walk for ALS. Last week there was a walk for AIDS. This is the world we live in. There’s always enough money for guns and warships, but we have to pass a hat for health care and research.

After the Murphys buried their children, they could have buried the past and put SMA behind them. But in 2001, Silvia chose to organize a walk to raise money for research instead. She said she had the time because she didn’t have children to care for and didn’t have a job and didn’t want to go looking. She wasn’t ready for that yet, she said. “Too much conversation.’’

So without a mailing list or contacts (“I met maybe five other families and told them about the walk’’), she raised $20,000 and sent the money to Families of SMA, a nonprofit organization founded in 1984 whose mission is to find a treatment and cure for SMA.

Nine years later, the Murphys, who live in Norwell, have three children, all adopted from Korea. But they continue to walk and work for a cure for SMA.

This year 800 people showed up at Wompatuck State Park in Hingham on a sunny Saturday in May for the New England-wide “Walk-n-Roll,’’ the parking lot full of families and babies in carriages with headrests, and children in wheelchairs, and volunteers handing out drinks and selling raffle tickets. And there were balloons and face painters and parents hoping and hanging on.

And once again, with no paid staff and little publicity, the Murphys, with the help of two other families, raised more than they expected: $100,000.

“You have friends and they ask what they can do and there isn’t anything to do. Except raise money. And people are generous. And raising money helps,’’ Silvia Murphy said.

It’s too late for her children, she knows. “But not for others. This disease affected me. I want to affect it. I want to turn the tables.’’ She wants the killer of her children destroyed.

Her husband compares the loss of Cianan and Cecilia to a missing leg. You can function without a leg. You can get an artificial leg and learn to walk and run. You can learn to ski. And you can be happy.

But no one would ever assume that an amputee doesn’t miss his leg.

Silvia Murphy said you can be happy and sad at the same time. That you can be thrilled and full up with love watching your child perform in a play, but suddenly feel your heart aching, too, because of what your nonliving children have missed.

One in 40 people carries the gene that causes SMA, which means there are more than 7 million carriers in this country. Two newborns are diagnosed each day.

If every day snipers were killing our children, picking them off one by one by one, wouldn’t our government react? Wouldn’t it be a top priority to stop the killers? Why is the slow dying of a human being with illness and disease any less urgent?

Canton resident Beverly Beckham can be reached at bevbeckham@aol.com