All dressed up and ready to roll 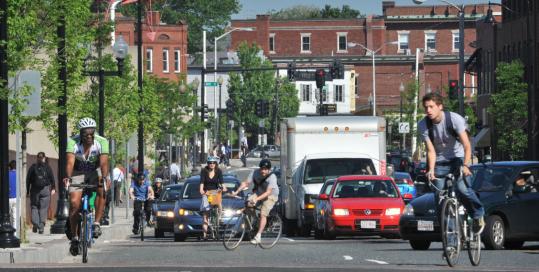 As Natalie Eringros makes her way through Porter Square, the traffic includes many other bicycle commuters. The Arlington resident dons business wear, including heels, for her ride. (Photos By Josh Reynolds for The Boston Globe)
By Genevieve Rajewski Globe Correspondent / June 13, 2010

Move over Lycra-bottomed bikers, racing past in a flash of blinding neon, and couriers, weaving through traffic in edgy-looking gear. A growing number of cyclists are taking to the streets for transportation without changing into special apparel.

“Whatever I feel like wearing that day is what I wear,’’ says Natalie Eringros, who bikes from Arlington to her job in Somerville’s Union Square. “Spandex makes biking seem less accessible, when in reality anyone can pick up a bike and hop on as is.’’

“I like the simplicity of it,’’ seconds Marc Richardson, who rides in work clothes from his Arlington home to his job near South Station in Boston. “You get ready and go, just like you’re jumping on the train.’’

In European cities such as Paris, cyclists riding in regular clothing represent the norm. But in recent years they have gained the status of fashion icons, celebrated by the Copenhagen Cycle Chic blog and numerous international imitators, including Vélo Vogue and Boston’s own Chic Cyclists.

“Charlotte,’’ the nom de plume for the Chic Cyclists author, writes that she started the blog to “help women feel like biking was something they can do every day in a comfortable, casual way.

“I think a lot of people can’t see themselves in Spandex, and if that’s the only kind of cyclist they see, they don’t see themselves as a possible cyclist,’’ Charlotte contends. And so to counter that stereotype, she posts photographs documenting people cycling while wearing street clothes.

“Just three to four years ago, the majority of people I saw biking in commuting hours were wearing Spandex or other performance clothing,’’ says Arlington resident David Watson, executive director of the Massachusetts Bicycle Coalition, a nonprofit advocacy group based in Boston.

“Now, that has completely turned around.’’

According to Watson, clothing is both a perceived and real barrier to biking for transportation — but in either case, people are learning it’s not hard to overcome.

“When riding to get a workout, wear athletic gear,’’ says Watson. “But for biking every day, ride in whatever you are comfortable in normally, or you won’t ride.’’

Gerry Bingham, who commutes by bike from Arlington to his job near Boston’s City Hall Plaza, confesses that he doesn’t change at work for two reasons, despite the availability of lockers and a shower in his building: “One, I’m lazy; and two, the one time I tried it, a cleaning woman greeted me as I came out of the shower in a towel.’’

But biking to work in office clothes can present challenges, particularly for women.

“I wore a pencil skirt and thought it would be OK,’’ says Katie Blais, who commutes by bike from Arlington to Somerville. “But it kept riding up, so I basically flashed all of Davis Square.’’

Riding in a long skirt risks catching the hem in the rear wheel, although special-ordered skirt guards are available.

“I prefer skirts that are A-line or wider. I can technically pedal in more-constraining skirts, but I don’t like worrying about getting tangled up in them,’’ says “Velouria,’’ author of the local Lovely Bicycle blog.

The good news for women is that bicycling may actually expand your shoe options.

“I don’t bike in special shoes, and it’s actually easier to bike in high heels than to walk in them,’’ says Eringros.

With an ever-increasing variety of helmets and covers providing fashion-conscious alternatives to the standard vented- egghead version, the only style pitfall left is flattened hair.

“I confess I’m not completely free of vanity,’’ says Bingham. “Short hair and minimal amounts of hair gel can be great combatants for helmet head.’’

However, there’s one particularly crucial factor for stylishly cycling in regular clothes: Don’t sweat the ride.

“We see bicyclists doing the same thing as every other kind of commuter: going as fast as they possibly can to get where they are going,’’ says Watson. “But if you look to Europe, where many people bike in business or regular casual wear, they are not racing around like they are in the Tour de France. If you are riding the way you should be — stopping at lights and driving defensively — going faster gives you no advantage in terms of shortening your commute. You’re just getting yourself hot.’’

The riders agreed that cycling in streetwear requires no more effort than any other commute in New England’s temperamental weather — and provides much more of a payoff.

“I can drive, but I don’t like to anymore,’’ says Eringros. “It feels like you are traveling in a metal can and life is passing you by. When you are out on a bike, you’re still moving fast, but you are part of the life around you.’’