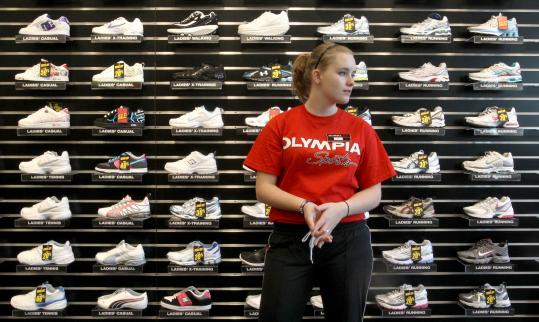 Tia Strong, 16, was one of the lucky few teens to land a job this summer. She was hired as part-time sales clerk at the new Olympia Sports store at Gloucester Crossing. (John Blanding/Globe Staff)
By Kathy McCabe Globe Staff / June 6, 2010

GLOUCESTER — When Tia Strong wanted to score a job at the new Olympia Sports store, she moved as quickly as she does on offense for the Gloucester High field hockey team.

“There’s always that one job for two people,’’ said Strong, 16, stocking shoes in the store at the Gloucester Crossing strip mall. “Basically teen jobs are a competition.’’

It’s tough for teens to get into the employment game. The jobless rate for Bay State teens, ages 16 to 19, was 16.2 percent last year, compared with the national rate of 24.3 percent, the highest since the recession struck in 2007, according to the US Bureau of Labor Statistics.

The spike shows how hard the worst economy since the Great Depression has hit teenagers. A loss of high-paying jobs, such as in manufacturing, has created more pressure in the teen labor market. Teenagers now face off with unemployed adults for jobs in such traditionally youth-friendly fields as retail and food services, a labor market economist said.

“Older workers have really come into the teen labor market,’’ said Paul Harrington, associate director of the Center for Labor Market Studies at Northeastern University. “We were just oozing jobs for a while. The options for people were so diminished, they had to look at lower-paying jobs . . . The odds really shifted against younger workers.’’

Strong learned that last summer when she went looking for work around Gloucester. She applied to beach places and supermarkets, only to lose out to college students and laid-off adults. “It was really rough,’’ said Strong. “Pretty much in August I gave up trying. I was going back to school anyhow.’’

Megan Pereen, 16, of Gloucester, last year lost out to adults for a job at a computer game store. “They seemed to only want adults who were supporting families, rather than kids,’’ she said.

But this summer Pereen and Strong are among seven teenagers hired at Olympia Sports. The Maine-based sports retailer, which recently opened stores in Chelmsford and Wilmington, fills most of its part-time sales jobs with teenagers. The chain works with local schools to advertise jobs, which pay about $8 an hour to start. Teens must be 16 years old to apply, officials said.

With youths a lucrative customer base for team hats, jerseys, and sporting goods apparel, teen workers are good for business, said David Heath, training coordinator. “Younger employees speak to younger customers on the same level. That can help sales.’’

Still, some employers believe hiring youths under age 18 is risky business. Teens under age 16 are limited by federal law in the number of hours they can work. “Few, if any, [employers] want to hire a 14- or 15-year-old,’’ said Mary Sarris, executive director of the North Shore Workforce Investment Board in Salem. “Most err on the side of hiring older teens. That’s a continuing challenge for us.’’

FirstJobs, the board’s youth employment program, aims to place teens in private-sector summer jobs. A job fair this year has drawn pledges from TJ Maxx Co., Eastern Bank of Lynn and North Shore Bank of Peabody. joined this year, pledging to hire one 18-year-old at its aircraft engine plant in Lynn, Sarris said.

Many retailers and restaurants also require a high school diploma or prior work experience before hiring a teen, according to a list of job openings at Northshore Mall in Peabody.

“Our preference, from a maturity and environment standpoint, is to hire kids who are 18,’’ said Kevin Harron, president of Burton’s Grill, the upscale eatery based in North Reading, which plans to open a new restaurant in the mall on June 28. About 100 positions, including hosts, servers, cooks, bartenders and dishwashers, must be filled. But teenagers often require more training than adults, Harron said.

“They don’t come to you knowing how to fry an egg anymore,’’ he said. “There aren’t a lot of teens that come to us with kitchen skills.’’

Too many teens hoped to learn how to grow food this summer by working for the Food Project North Shore, which has farm sites in Ipswich and Lynn. The program had only 36 slots, and about 100 teens applied for the program, which pays $200 per week. “We were flooded with interest,’’ said J. Harrison, the North Shore site director for the Food Project, headquartered in Lincoln. “Very few kids who applied weren’t qualified. The hardest part was picking them.’’

With private-sector jobs scarce for teens, public money for summer job programs has helped to close the gap. The state last year used $21 million in federal stimulus dollars to put 7,000 youths to work in local communities and nonprofit organizations. But this year, funding for a summer jobs program is no sure bet. A $1 billion summer youth jobs bill has bounced between the US House and Senate for months.

If the money is released, Massachusetts will use its share to boost a $4 million pot of state money to fund summer jobs programs for teens, an official said.

But some Gloucester teens feel they caught a lucky break when Olympia Sports came to town. Seven of the store’s 10 employees are teenagers working part time as sales clerks. All were hired after local interviews and training in the chain’s Peabody store. They learned to size a sneaker, fit a youngster for a baseball glove, and ring up a sale.

And for some, it’s a dream job.

“I want to save enough to buy a skateboard and take my friends to a Bruins game,’’ said Joanna McKinnon, 16, a sophomore at Gloucester High, who is working for the first time.

“I love sports,’’ said Katianna Pardo, 16, a gymnast and lacrosse player at Gloucester High, as she carefully folded men’s black T-shirts. “This job is a good fit for me.’’